Got a bit of a hurricane problem here; if I drop off from answering forum posts / blog comments for a few days, it probably means I lost power. See you again soon!

Getting back into the groove on ability icon art, slowly but surely… 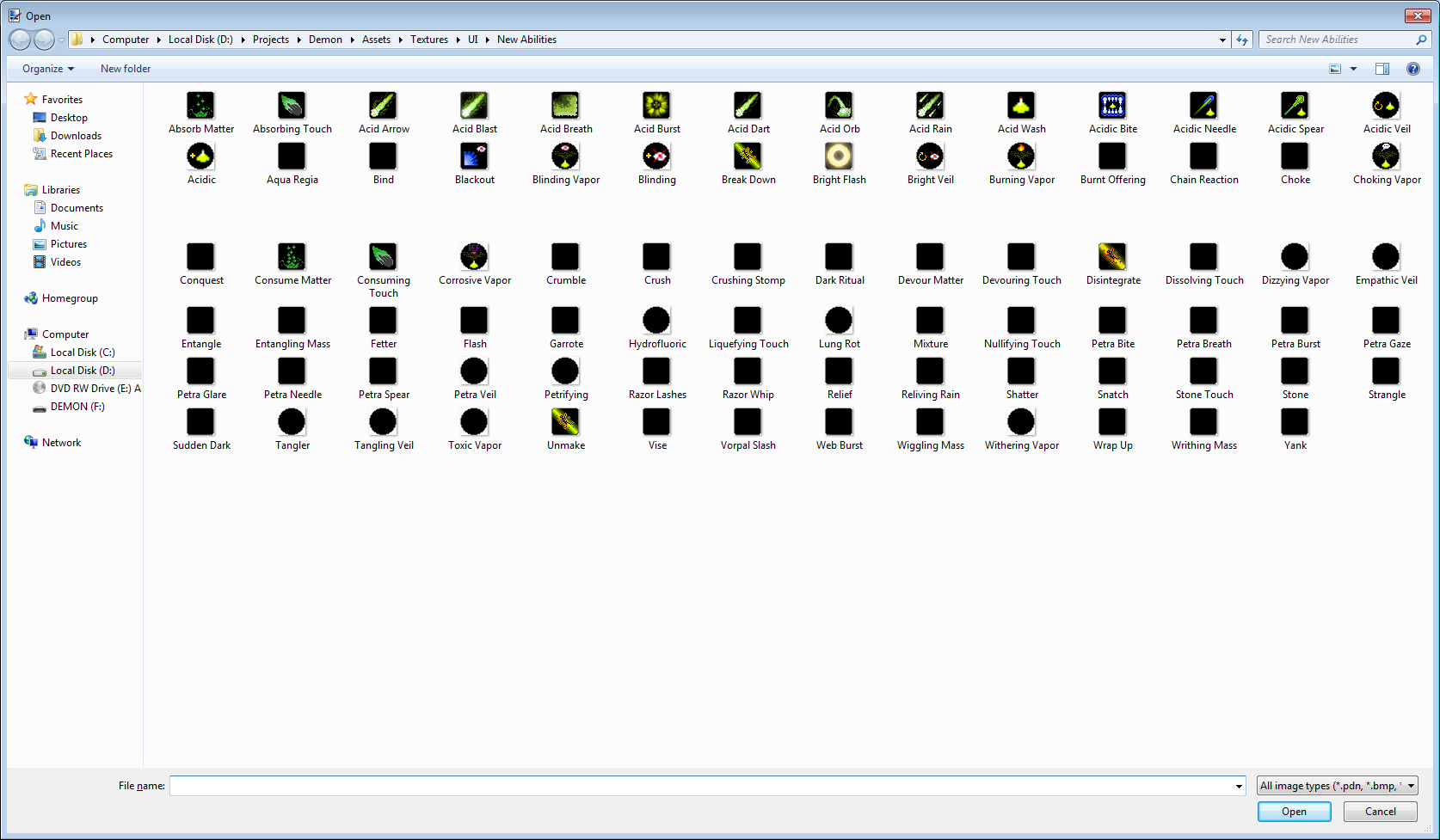 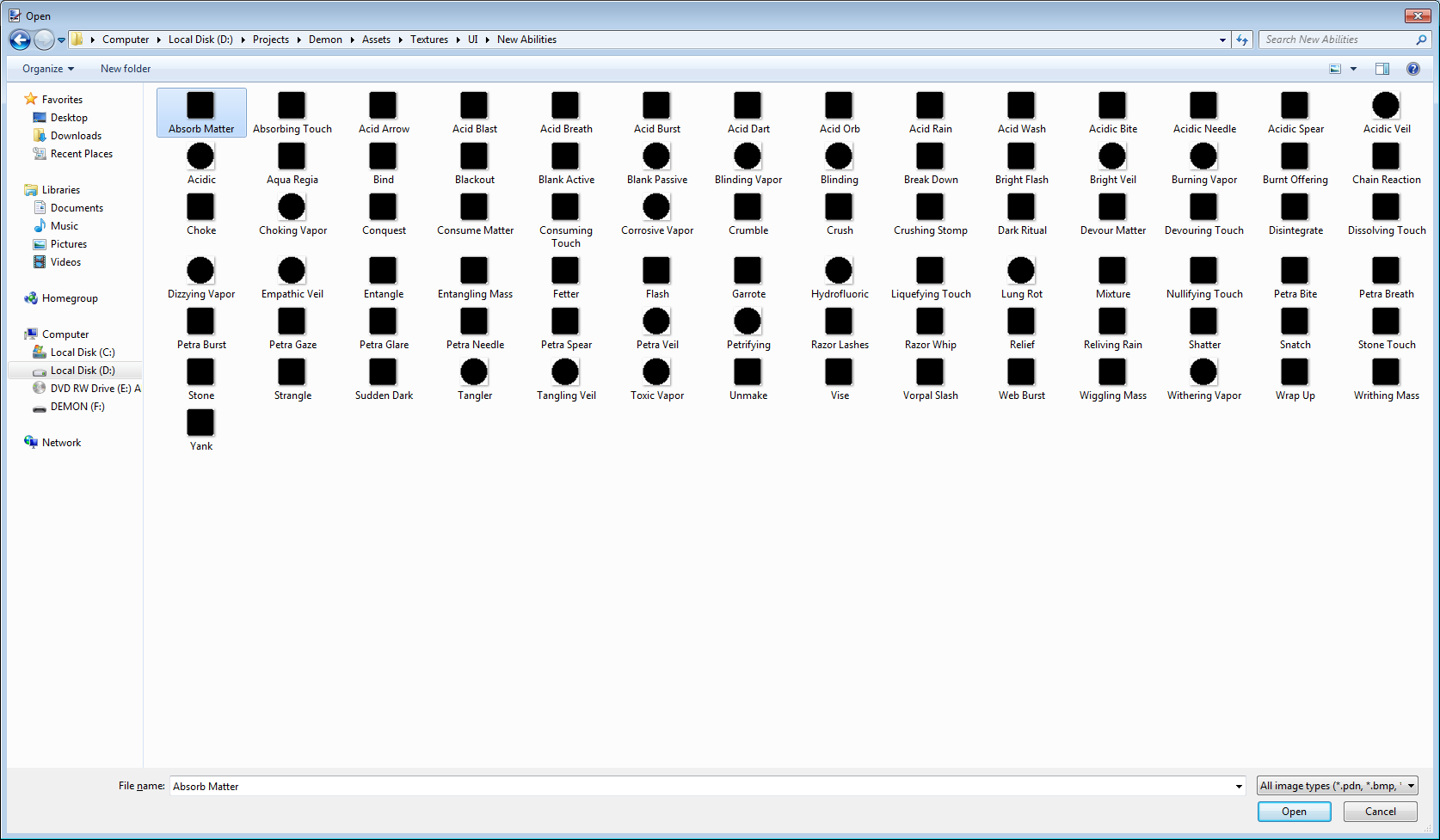 The Matter build is going to be adding nearly 20 new demons to the game to provide new homes for some of the Matter abilities being added to the game.

Here’s a sampling of what will be coming:

Barometz: Also known as a Vegetable Lamb of Tartary, Barometz is a Central Asian lamb that grows from and is attached to a plant. It lives only while the foilage around the plant is available for feeding: once it has eaten everything in range, it will die. Its blood was said to taste like honey.

Mandrake: A rare and powerful plant whose roots have the shape of a man. Though capable of being made into a familiar by a knowledgeable sorcerer, they are more well known for their habit of killing the one who harvests them with a powerful scream. Those who would harvest them usually exposed a single root, then tied this to a dog, who they would then induce to pursue them as they walked away. The dog would follow, pulling up the plant and becoming it’s victim, leaving the (rather heartless) forager to their prize.

Alicanto: A Chilean bird that eats metal, with its body and feathers eventually taking on the properties of the favorite metal of the particular Alicanto in question. This usually leads to a dazzlingly bright… but very heavy…. bird. Indeed, well-fed Alicanto are too heavy to fly at all. They can mean good or ill for those who encounter them: in some tales, they lure victims who pursue them to death, in others, they help with the finding of the valuable metals they themselves enjoy.

Gorgon: A beautiful… and also hideous… creature of Greek mythology, renowned for their ability to turn humans to stone with their gaze. Depictions of their appearance vary, but most accounts agree they had beautiful faces paired with various monstrous features such as fangs, wings, scales, and the like. Gorgons are immortal, with the notable exception of the most well-known of their number: Medusa. According to some stories, all had snakes for hair, but other accounts suggest this was only true of Medusa.

Catoblepas: A dreadful animal of Ethiopia, appearing in most respects as a buffalo, but with a large head attached to grotesquely long, weak neck, making it incapable of holding its head up for any significant length of time. This is just as well, for the beast possesses both a glare that can turn mortals to stone, and a poisonous breath that is no less lethal.

Peluda: A French dragon, green and covered in hairs, spines, or quills that it was capable of shooting off of its body like arrows to attack its prey. The spines carry poison in addition to being large enough to inflict physical harm, but these are hardly its own weapon: depending on the story, it can breath fire or acid, and can kill with mighty strikes of its tail.

Nuppeppo: A Japanese yokai that appears to be little more than an animate lump of flesh. It is known for its horrific, overpowering odor, but some stories claim its flesh if eaten can provide eternal life.

Umdhlebi: An incredibly toxic and mobile type of plant spoken of in some African tales. Stories vary wildly as to their specific appearance and what dangers they pose humans, but most agree that it possesses some form of poison it secretes into the air , acidic sap, and, for those who manage to harvest its fruit, remarkable healing properties.

Kaw Kaw: Maltese stories warn of this humanoid-shaped, large-mouthed slime creature that stalks the night, seeking out sinners to torment and devour.

Ya-Te-Veo: Sometimes a picture is worth a thousand words.