Well, actually, a few more than one, but that’s really all this is, a small bug fix build to address some issues with Hastening Cut and Prism Nova. It also includes one balance change for Brands related to the “Requires X Level” modifier. The links at the right have been updated, so go grab it when you like.

Break or no break, I want to do a small build this weekend to fix a few ability bugs from the new content. Nothing critical (in fact, that was why I waited this long, I didn’t want to have turn around and do another if anything critical did pop up

), but didn’t want anyone to see it by surprise and think it was the balance build already either. :D  Cheers!

I’ll be taking a break for a bit now that the Tower:27-29 build’s been released and seems free of any major issues.

I plan to resume development in a couple of weeks or so, and the next build will focus on some balance tweaks and refinements, most notably to Titan’s Fist, which is a bit too “easy” and also a bit too “not Demon” for my liking after having a fair bit of time to observe it and take in feedback about it. Cooldowns will also be getting a general pass, as will Brands. Other adjustments and tweaks are also likely, but I won’t have more details to share until I get started on planning when I return to dev mode.

To celebrate the success of the new build, here is another awesome piece of Demon fan art from Zyalin.

You can see more of Zyalin’s awesome work on Twitter at: https://twitter.com/Zyalin_Art 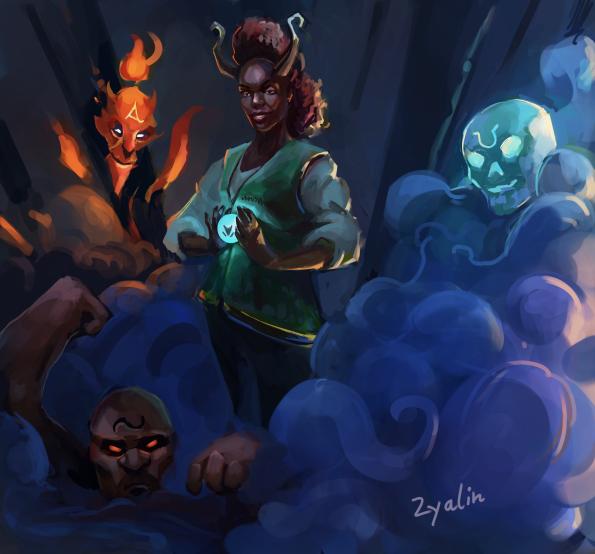 As promised, the new build is ready and released! Links at the right have been updated already, so go grab it!

Frequent visitors will already know this, but the new build adds three new floors to the Tower, bringing the total height of the main dungeon to 29 out of the 30 planned floors. What was less discussed is that three new Sanctum side dungeons have been added as well: two in the new floors, and one slightly before them. As is usual for Sanctums, their appearance from game to game is somewhat random, so do not expect to see all three in a single game.

Nearly 50 new abilities are included as part of this release, many of which can be found much earlier than Tower:27 and above through the random modifier system. The majority are available once you reach the Tower’s middle floors (11+), but some are available even in the earliest floors, so you may find new surprises.

The new demons are of course also not restricted to the new floors: though that is where the vast majority of them normally spawn, you may encounter many of them in Sanctums as rare out of depth encounters long before coming close to Tower:27. Save those Offerings!

Finally, this release also includes two requested changes: there is a new option that allows you to bypass the recently added start menu when booting up the game, and the VFX for “smite” type spells have been sped up considerably.

That’s about it for details about the new build; go grab it and get started on seeing it for yourself! Good luck in the Tower!