A brief update on what’s coming up next:

I’d like to do one more small-ish “resting hamster” polish/refinement style build before returning to adding new mechanics/features. This one will hopefully be relatively short and sweet, I mostly just want to knock out some UI related bugs/requests that I’ve been putting off because I don’t like working on UI bugs/requests.

My intent is to have this next build out relatively quickly. Once it’s done, I’ll be ready to talk about the next new thing being added to Demon.

I wanted to take a little bit to talk about the future real quick.

Short term: I’m taking the next week or so off, other than working on bugs.

I pushed pretty hard to get the Sanctum build out by 9/18… and also, Shin Megami Tensei IV: Apocalypse came out.

Given SMT is the series of games that serves as Demon’s primary influence, it probably shouldn’t surprise anyone I want to take some time to enjoy it.

Long term: For about the last year or so, I’ve been working full time on Demon. If you’re new here and that seems crazy to you given that I’ve sworn more or less in blood to never charge money for it in any form whatsoever… yeah, okay, it probably is crazy in some form.

Of course this means that I have to take other work at various points in order to maintain a proper budget, and that’s what we’re coming up on now. With any luck, I will probably be working again starting sometime next month, which will mean Demon development will become part time instead of full time for awhile.

I want to stress that point though: part time, not no time.

Demon development *will* continue, but I anticipate a significant slow down for a couple of weeks once the job begins as I ramp up on it, and then things will go a bit faster after that. It’ll still be slower than full time development was of course, no getting out of that, but based on past experience it should still be an acceptable pace.

This seems like a good time to thank everyone for playing up to this point, so: thank you, seriously.

Demon may not have many players yet, but I’m happy with even the number it does have, especially given how much some of you play it.

As a certain Sanctum included in the last build should prove for those who have found it, the Tower has plenty of surprises left to reveal.

Stick around, and maybe you’ll find out what they are.

Updated the build links to 9/19, which includes a fix for a bug causing Sudden Chill to affect allies as well as enemies, and Pyre Rite to affect enemies as well as allies. Thanks for the quick report ayayaya.

In case you’ve missed it, the big changes in this build are:

I’m a tired FerretDev and am going to go be flat somewhere for awhile to prepare for Shin Megami Tensei IV: Apocalypse’s release Tuesday.

The characters I’m using to test aren’t having as much luck, but then, it IS Demon.

There may be a few entries on the scoreboard before the build is actually available.

Here’s a screenshot of the latest test subject, a Faithful Heart priest who just entered one of the new sanctums. 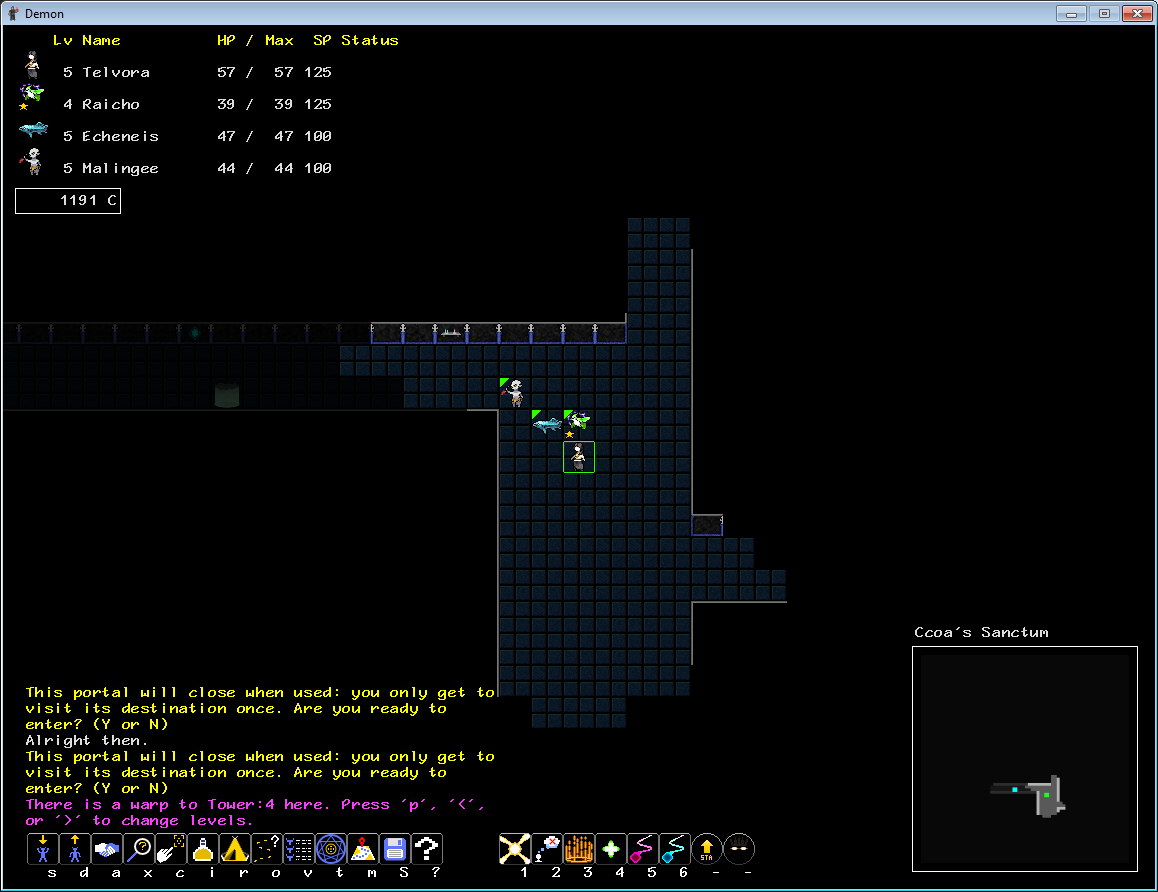 Apologies for not mentioning it sooner, but there will definitely be a new scoreboard in the 9/18 version.

Given a game of Demon will be 4 floors longer* in this version than before, not to mention the tweaking of the previously somewhat over-powered Strength buff, this hopefully isn’t a huge surprise despite my forgetting to mention it ahead of time.

By way of apology, here is the current top of the pre-9/18 scoreboard, preserved for future generations: 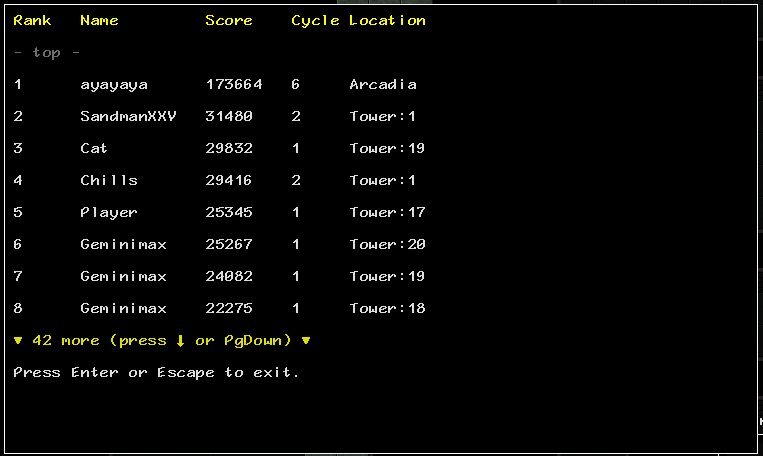 * (Why did I say 4 and not 9? Not every Sanctum will appear every game.

There are 4 new Sanctum slots, in addition to the slot Turdak’s Sanctum already had. Each slot has 2 possible Sanctums.)

And now, the in-game view of the 10 new demons coming in the next build.

Not going to say much more than that so I can get back to work, finishing this build by 9/18 for ARRP is going to be a nail-biter! Cheers! 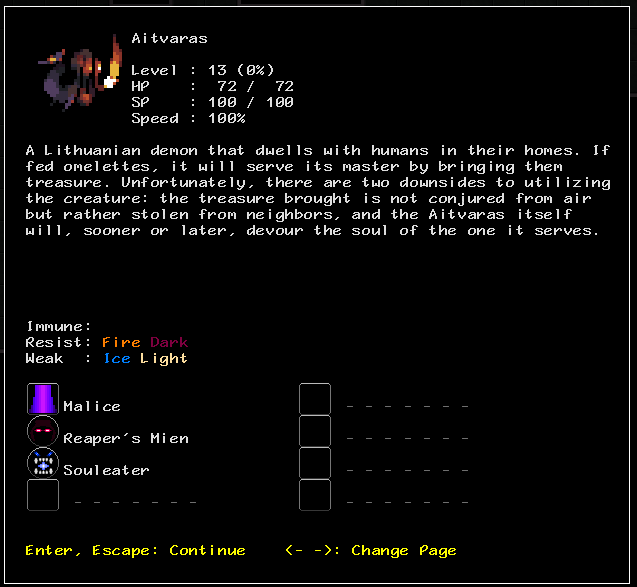 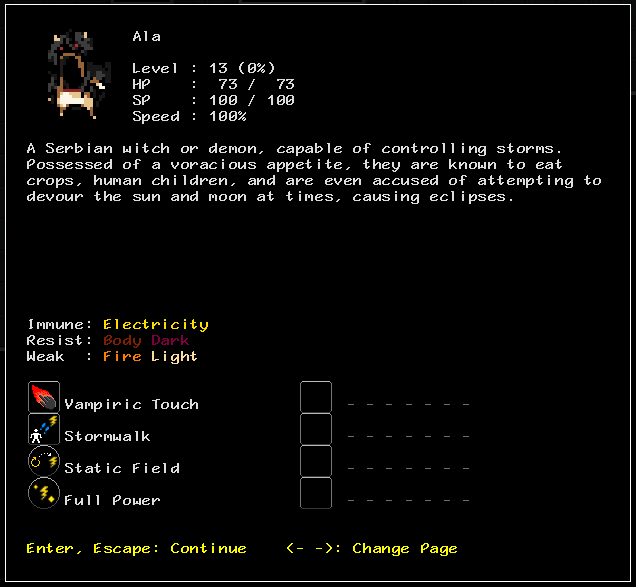 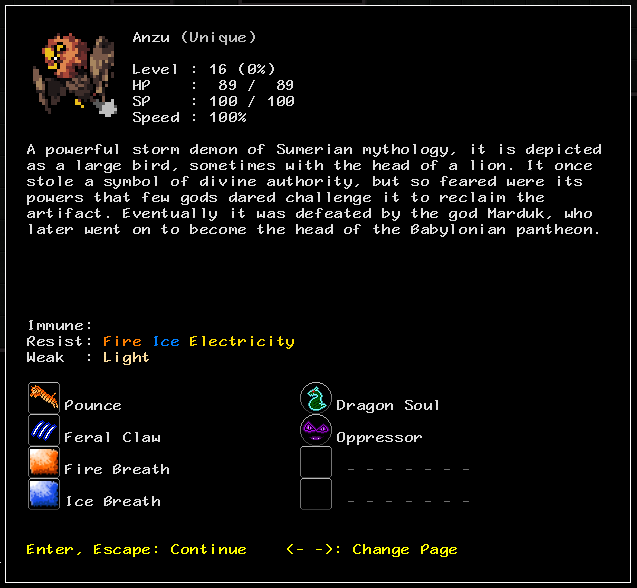 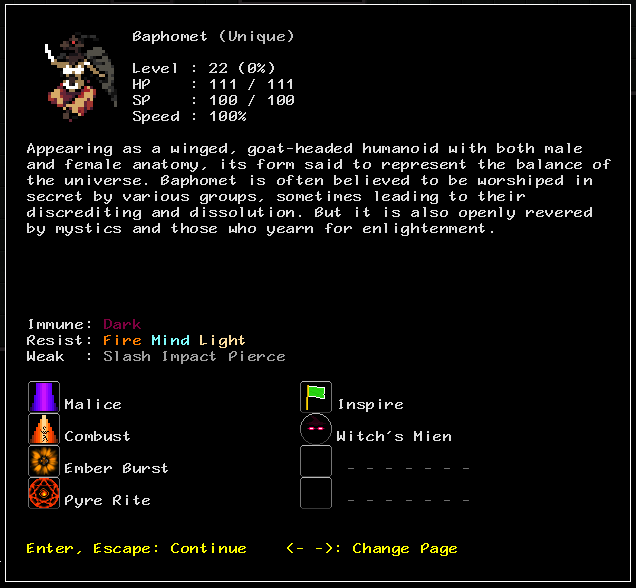 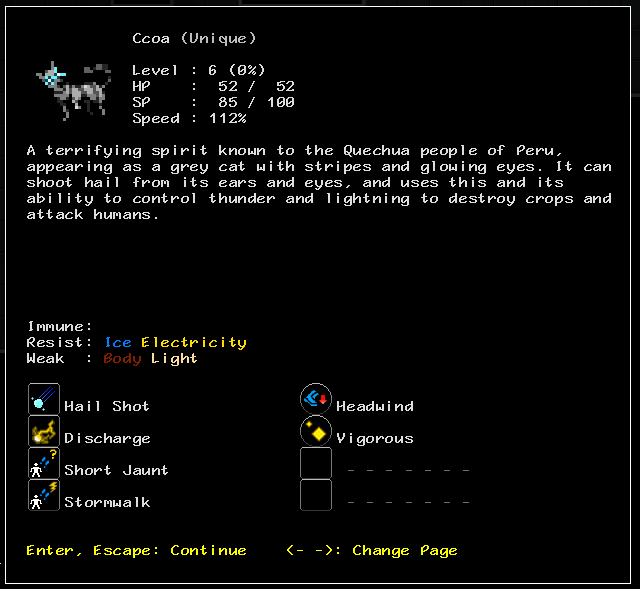 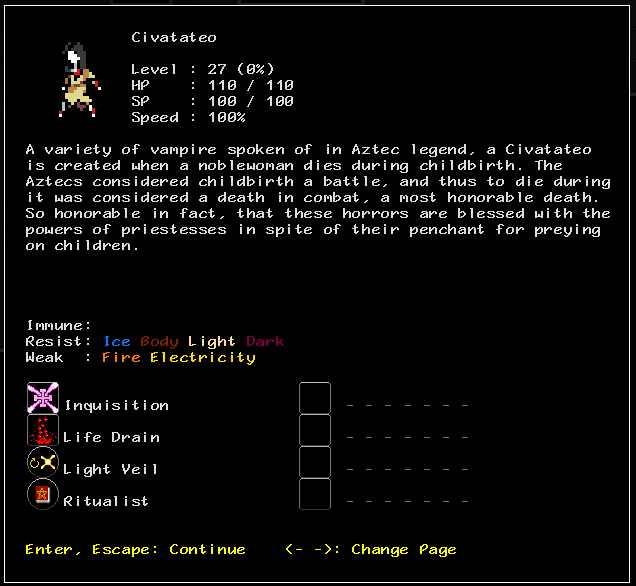 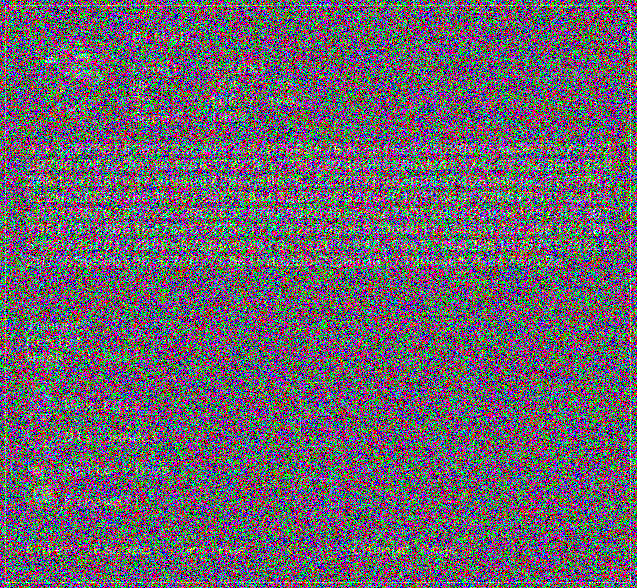 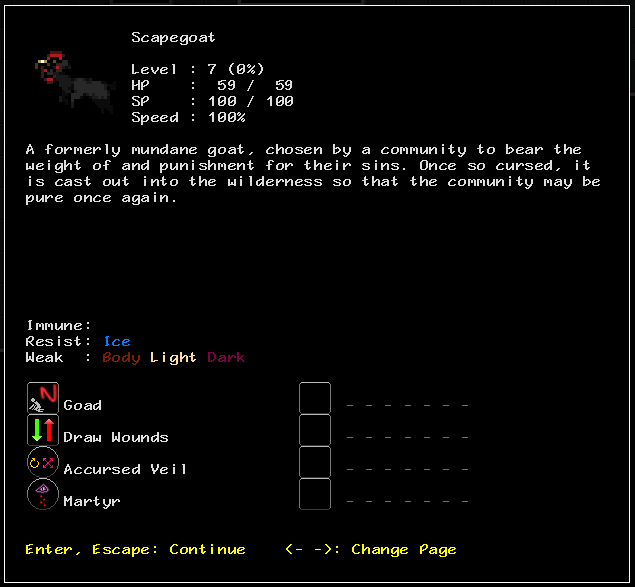 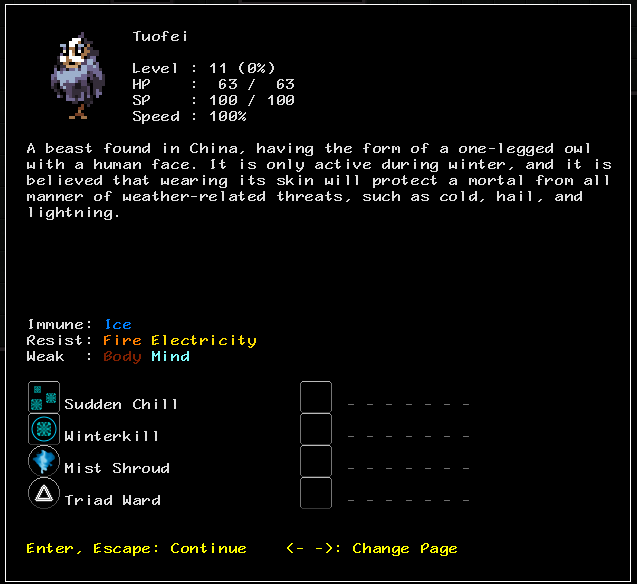 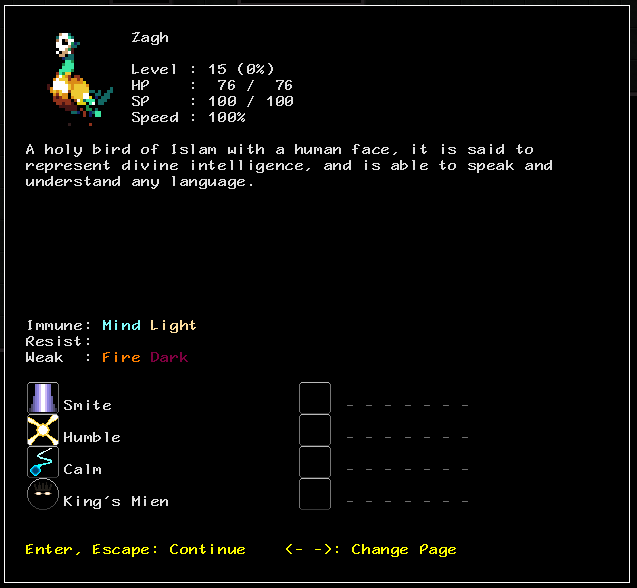 The 2016 Annual Roguelike Release Party is just around the corner: this coming weekend, in fact!

Though it will mean I need to push a bit faster than I’d planned, I hope to release the next build, including all the new demons, abilities, sanctums, and balance changes that have been discussed recently, on 9/18, the second day of the ARRP 2016.

I’m going into head down mode for this though: I probably will not be as active on the forums other than peeking in to make sure no bug reports are filed that need to be addressed. Please accept my apologies if I don’t respond with my usual speed and length this week.

It’s going to be tight, but with any luck, an awesome new build will be ready for ARRP 2016.

There will be a fair number of other roguelikes releasing during it as well, you can get the lowdown on the full list here: http://www.roguebasin.com/index.php?title=2016_ARRP

Wish me luck, and see you in a new, more dangerous Tower soon!

The sprites shown for each are the versions done by Geminimax.

Aitvaras: A demon of Lithuania appearing as a black rooster or a small, black dragon, but in either case with a tail like a shooting star. Similar to some other mythical creatures, they take up residence in the homes of humans and then, in exchange for minor payment (in the case of the Aitvaras, omelettes!), they provide various benefits to the household. The Aitvaras brings wealth to the house of its master… but there are a couple of unusual catches. One is that the wealth it brings is actually being stolen from neighboring homes… the other is that (depending on which version of the myth you ask), the Aitvaras will either eventually steal the soul of its owner, or said owner had to give up their soul to acquire it in the first place. In game, these will be a new Dark ability using demon to provide more access to the new Dark abilities added in the previous build, and will usually be encountered in the mid levels of the Tower.

Ala: A witch or demon known in Serbian mythology. Ala can take many forms, but one of their most striking is that of a very large-mouthed humanoid. They are no less horrible than this particular form suggests: they control the forces of nature and wield them to destructive effect against the croplands of humans, and will eat children if they get the opportunity. Indeed, some myths even suggest that eclipses are caused by their attempts to devour these celestial bodies! In game, they wield some new Electricity abilities, as well as a life-draining touch. They will take residence in the mid levels of the Tower as well

Baphomet (Unique!): An entity of a rather complicated history, to say the least. Depending on what you believe of its past, it was either worshiped in secret by various groups, such as the Knights Templar, or was a construct invented to discredit and ruin such organizations. More recently, it has been associated with mysticism and Satanism. Its purpose in the Tower is unclear, but those who can reach the upper floors might encounter it either wandering about, or in its Sanctum… If you are forced to fight, beware: it wields a powerful combination of Dark and Fire abilities, including one particular Fire ability unseen before within the Tower.

Civatateo: A vampire of Aztec origin, created when a noble woman dies during childbirth. To the Aztecs, childbirth was considered a form of combat, and thus to die in childbirth was a high honor, equivalent to dying in battle. As a result, though these creatures are child-eating monsters, they are also blessed by their gods, and wield the powers of priestesses. Befitting this unusual nature, they wield an odd but effective combination of Light and Body magic, but only summoners who can reach the heights of the Tower will ever need fear running across them.

Tuofei: A Chinese beast, active during the winter. It appears as an owl with a human face, and only one leg. Its skin can be worn to give protection from the elements. That’s… actually about as far as the information I have goes on these critters, but this is instructive, because myths such as this one (vague and scanty on details) are useful when I need to fill specific gaps: in this case, I needed a new Ice demon that was specifically suited to some new Ice abilities I had designed.

One like this, with clear connections to winter/ice but without specific details about its powers, was perfect for that role. Tuofei can be encountered in the lower half of the Tower, but closer to the middle than to the bottom.

And finally, as a special bonus, the ability icons for all the new abilities being added in this build. 4 of them are blanked out for… reasons.

I hope to get this build out pretty soon now, but as usual with content builds I got a little overzealous.

Take care, and good luck in the Tower.