BTW, the scoring model will be updated next build, meaning a fresh new scoreboard. The Light/Dark changes and the changes to how Strength works alone more than justify it.

You can view old scoreboards using old versions, so if you’re thinking you might want to gaze at a certain ridiculously amazing 8 cycle game again one day, it might be worth keeping a copy of the current build stashed somewhere.

I admit though, that’s a bit of a slow down in terms of games played per day back from the last milestone. It was 35-ish/day around the turn of the year, now it’s a bit more like 25-ish/day. I’m still happy with it, though it does mean I probably need to step up my “advertising” (if you can call it that for a freeware game) a little bit.

Thank you everyone for the support and feedback. 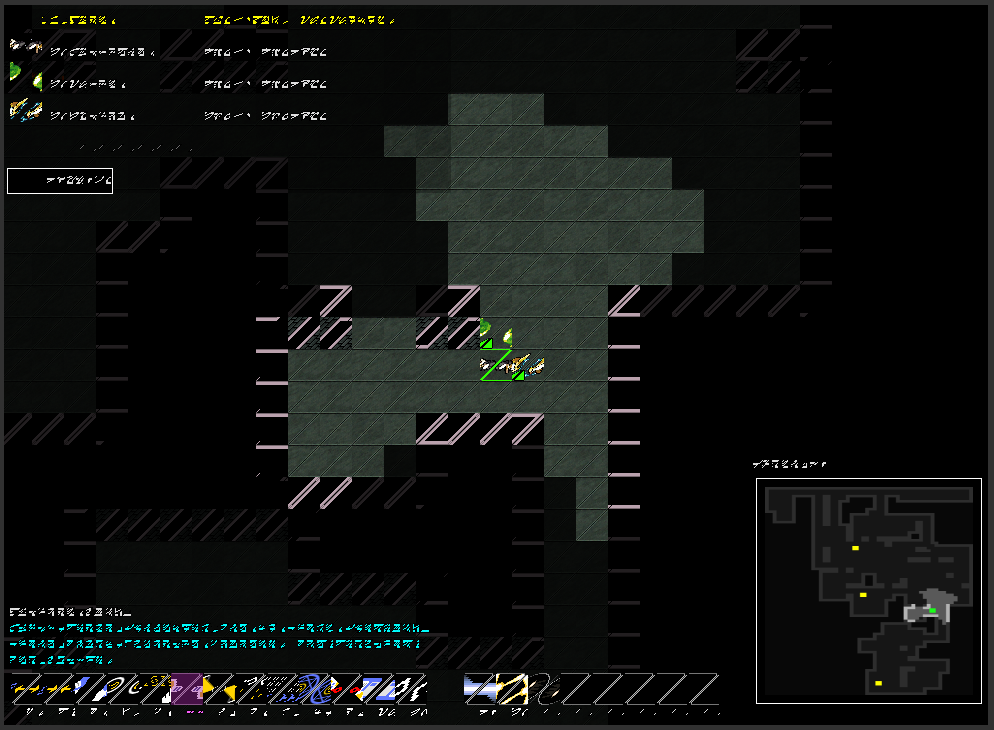 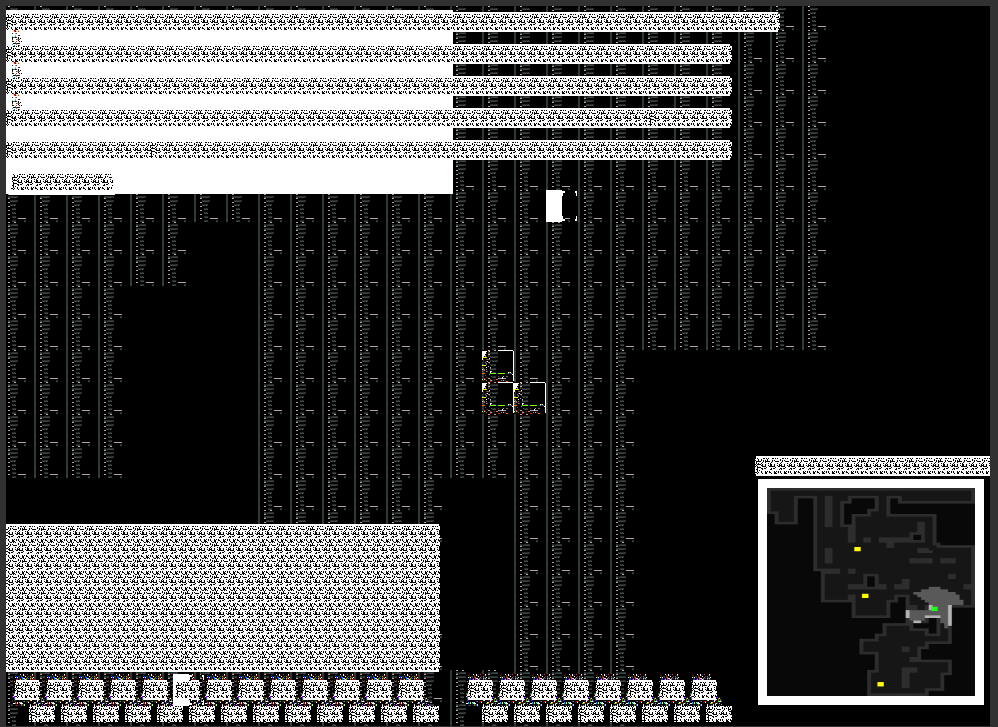 With all these new abilities that only affect characters who meet certain conditions, I figured it would be annoying to have to guess/remember/figure out which characters do and don’t meet the conditions. So, starting with the next build, cells containing characters that will be affected by the ability in question will be colored differently than ‘empty’ ones within the area effect.

In the example below, only one goblin is designated as an actual target, because only that one is both within Humble’s area of effect and meeting both the “affects enemies” and “whose HP is at or above their base maximum” requirements.

This change should also affect other, older conditional abilities, making them a bit easier to use too. 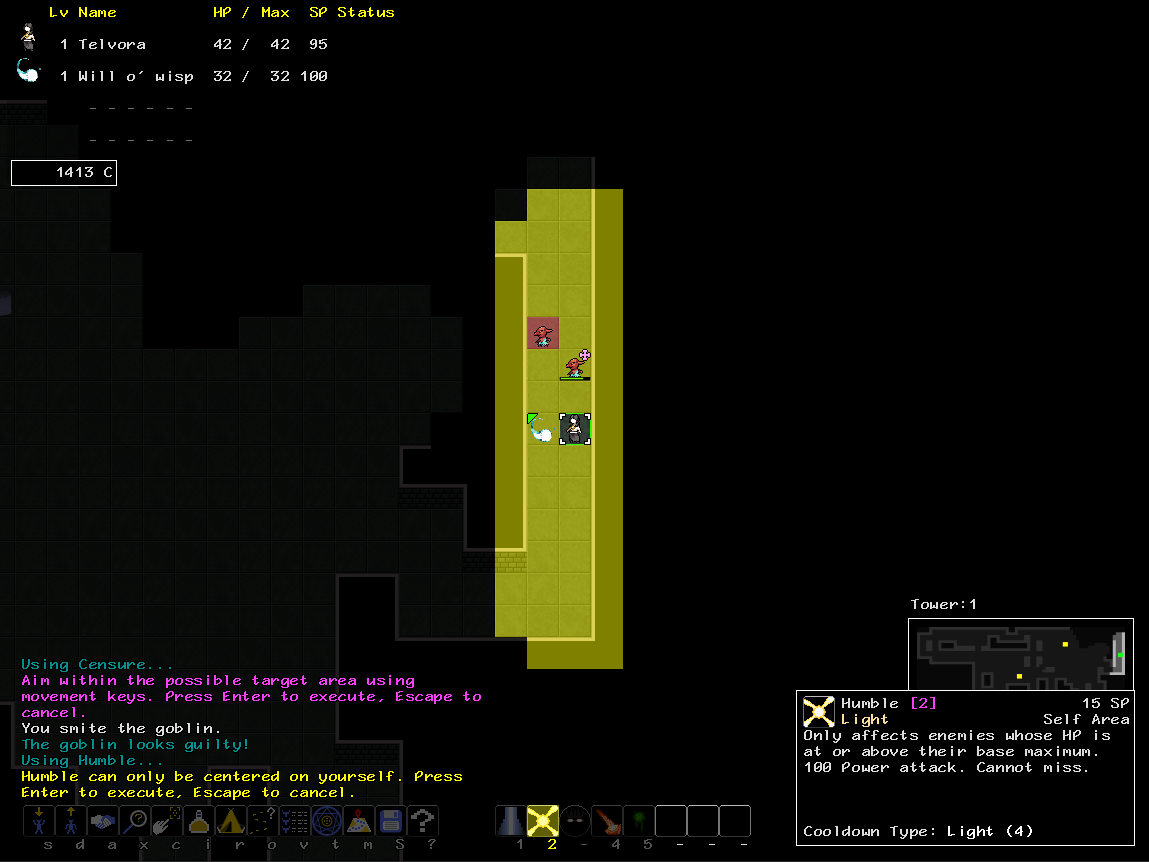 Wanted to give a brief peek at some of what’s coming in the next build’s Light and Dark revamp. 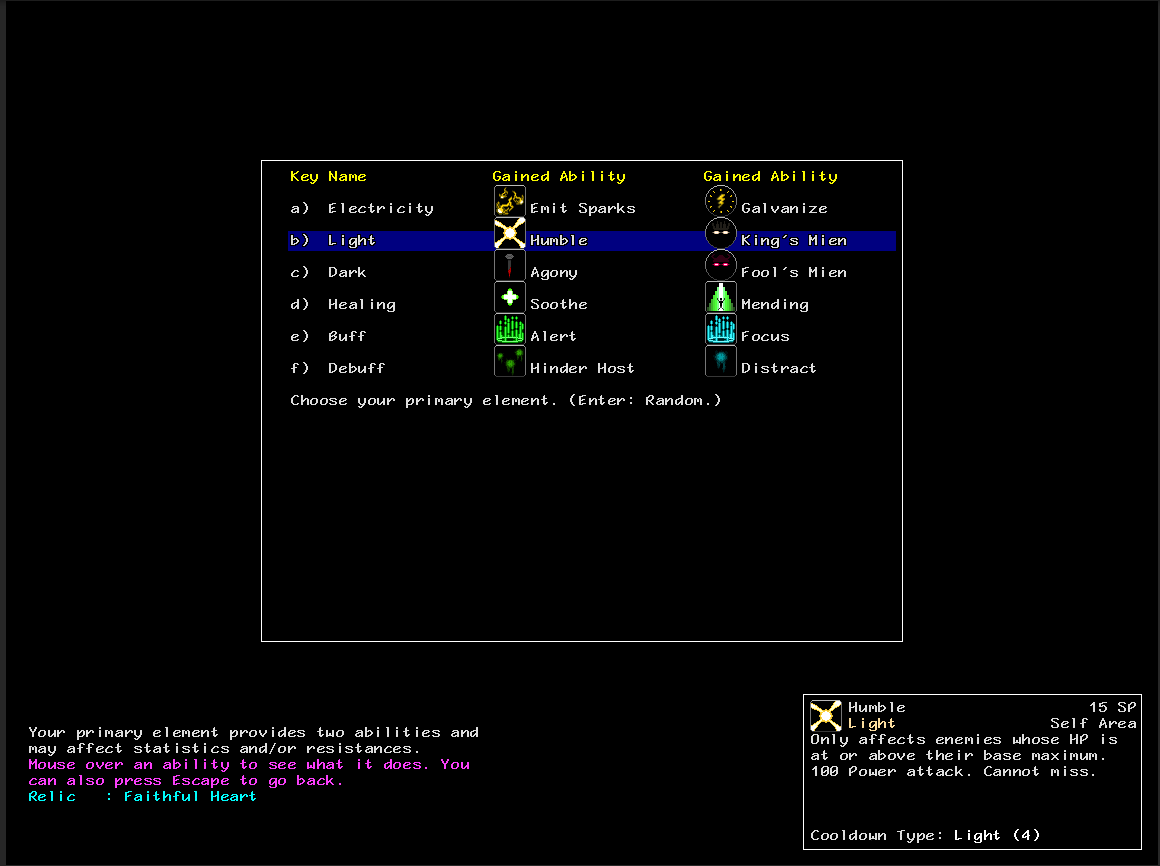 Both Light and Dark primaries start off with a “miracle” (a wide radius area effect spell that hits all enemies who meet a certain condition)  and a “mien” (a passive that adds extra bonuses to Light and Dark spells when the targets meet certain conditions.) For Light, the pair is Humble (a massive attack on all enemies at or above their base maximum health) and King’s Mien (adds Guilt to your Light and Dark attacks hitting enemies at maximum health.) For Dark, the pair is Agony (solid damage to all enemies without Agony status, but applies Agony status) and Fool’s Mien (adds Pariah to your Light and Dark attacks hitting enemies who did not use damage-dealing abilities on their previous turn.)

Both pairs are designed to give the player a very major miracle to open battle with: Humble will deal a solid chunk of damage to enemies at the start of an encounter, with King’s Mien throwing Guilt on most or all of them, allowing you and your allies to heal yourselves by making further attacks on the targets. Dark primary’s Agony deals a bit less damage than Humble, but unlike Humble, there is a chance you may get to re-use it during an encounter (since Agony can wear off, leaving enemies vulnerable to it once again.) Fool’s Mien applies Pariah to targets who did not attack the previous turn, thus, if Agony is used as an opening move, you will often get Pariah to apply to at least a couple of targets. Focusing firing on a Pariah’d target will spread damage to its allies, allowing your team to quickly eliminate groups of enemies. 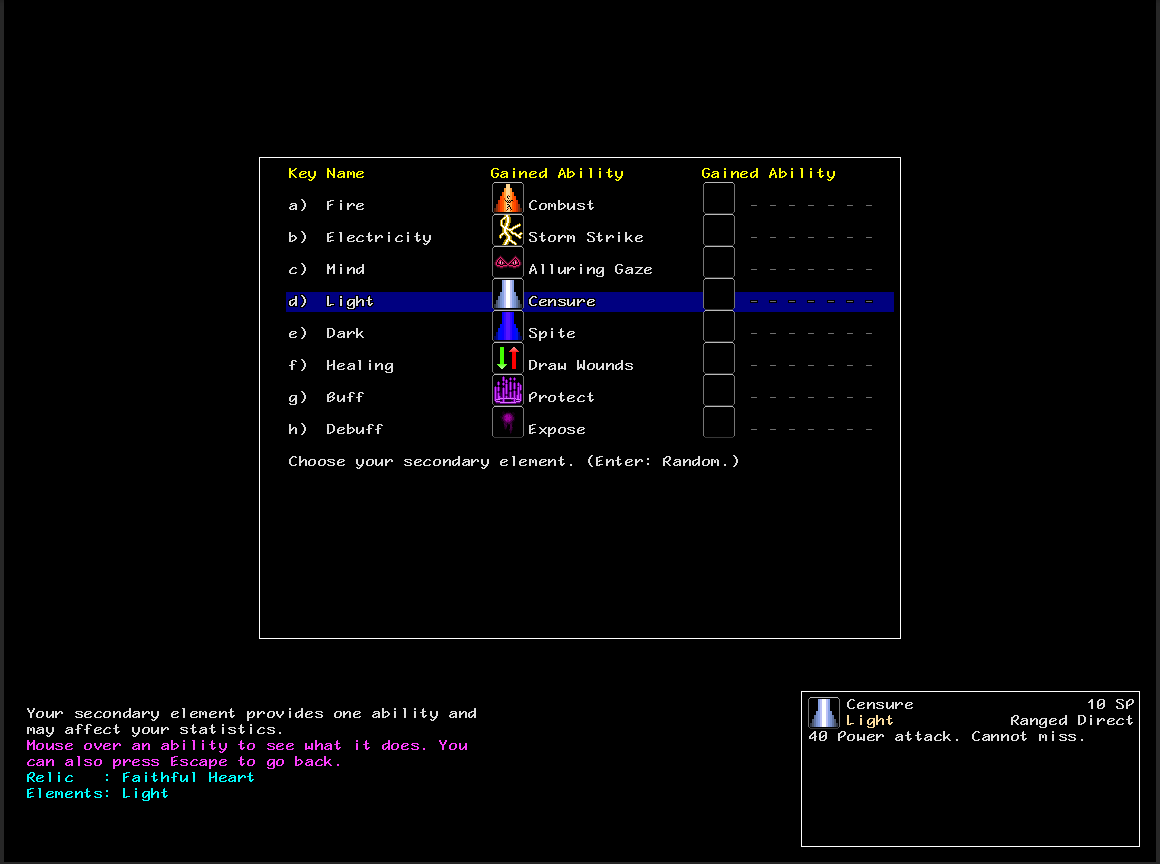 Light and Dark’s secondaries are both 40 Power smite attacks. On paper, they probably don’t look impressive. They’re cheap and can’t miss, but 40 Power is less than even a basic attack. But, since they also deal Light and Dark damage, both can trigger King’s Mien or Fool’s Mien, giving you additional ways to trigger these effects. Additionally, both also make cheap, easy ways to trigger Guilt and Pariah’s effects as well.

Of course, with so many changes to Light and Dark abilities, many enemies who use those powers have had their ability sets changed as well. Let’s look at a few of them! 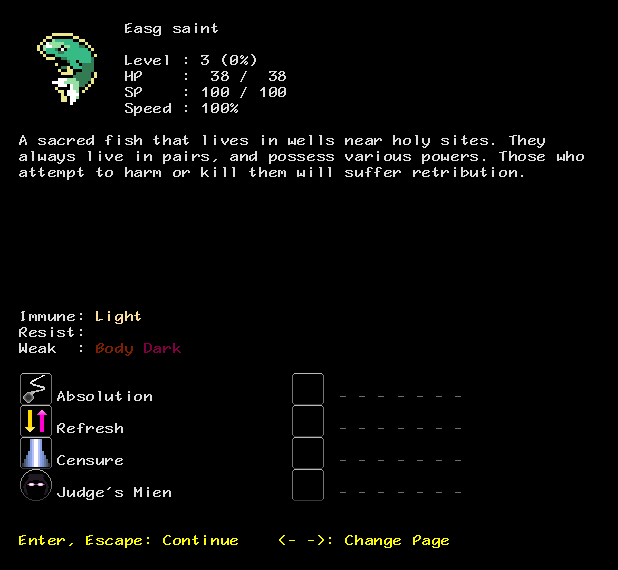 The meager Easg Saint is a bit more deadly these days: though Censure is weaker than the attack it used to have, it has no cooldown or conditions on its use at all, allowing Easg Saints to chain smite (if weakly) a target with impunity. If the target used a damaging ability last turn, Judge’s Mien will trigger, staggering the target and delaying their next turn. Quiet Prayer is no longer needed since Easg Saints have no cooldown abilities, so it has been replaced with Refresh. 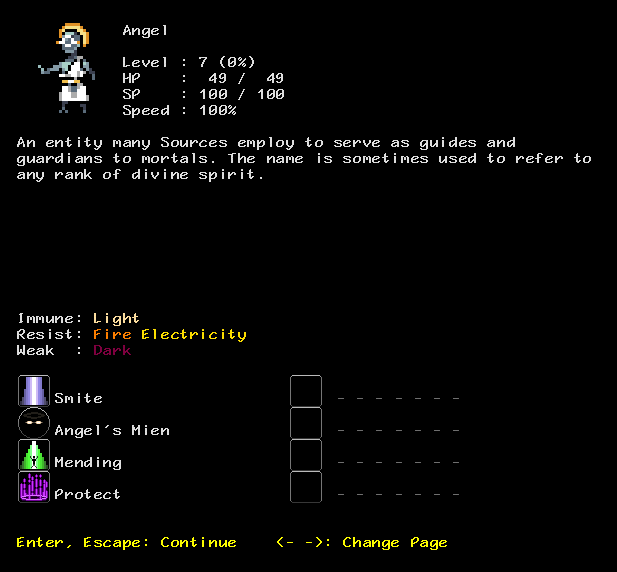 Angels use Smite rather than Censure: a bit higher SP cost, but higher damage too. It does have a cooldown of 1 turn, but that isn’t relevant since the Angel possess no other Light cooldown abilities. Angel’s Mien causes Light and Dark damage to have a fairly high chance to Stun targets if they are adjacent to the caster, together with their healing and defensive buffs, Angels can be tricky to take down with melee attacks. 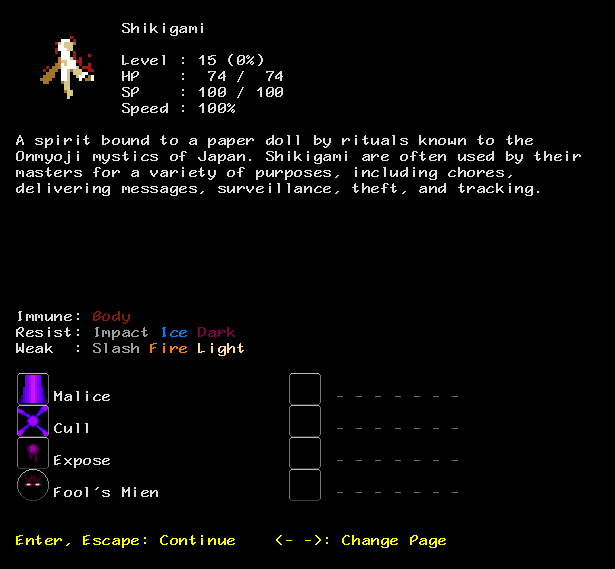 From the Dark side, let’s look at Shikigami. The main upgrade over the previous iteration is the addition of Malice, the middle tier Dark smite. However, here, unlike Smite and the Angel, the 1 turn cooldown does come in to play due to the presence of Cull: after a Shikigami uses Cull (which hits all enemies at half or less health), it will briefly be unable to use Malice while the shared cooldown decrements. Fool’s Mien from the Faithful Heart Dark primary is also here, causing both attacks to inflict Pariah if they find a target that did not attack the previous turn. Shikigami will often use Malice to inflict Pariah on a target, then attack that target repeatedly in hopes Pariah will drag most or all of their foes into Cull range. Incidentally, Cull can become quite deadly if it hits many targets already affected with Pariah… 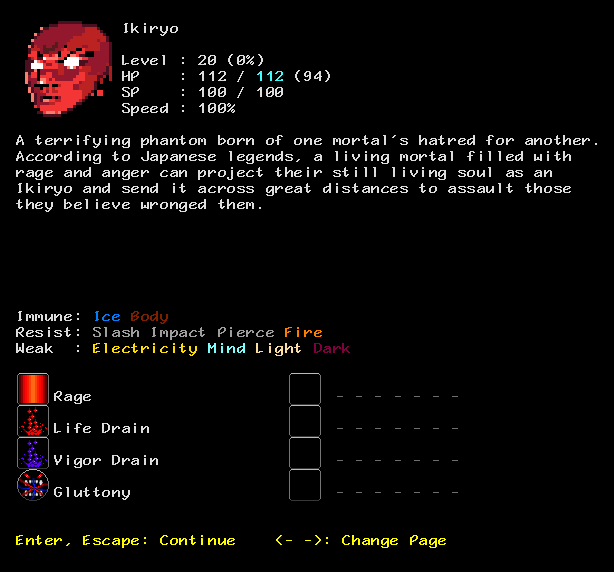 Last, but absolutely not least, the Ikiryo. Already a dreaded foe of the upper tower, he now has the top tier Dark smite, Rage. Rage is a 70 Power smite, but has a 2 turn cooldown, and thus can only be used every other turn (and like Malice, would be shut down completely for awhile if a longer Dark cooldown ability was used.) Rage’s presence here gives the Ikiryo a longer range option, and also makes it difficult for low health targets to hide from it, since Rage, unlike the Drain spells, does not require a clear line of fire.

This isn’t a complete list of the changes to creature ability lists by any means: only a small preview.

Hopefully the build will be ready relatively soon.

The next build is polishing up all sorts of things: Light and Dark magic (currently being discussed at some length in the forums: http://forum.ferretdev.org/viewtopic.php?f=6&t=174  ), currency costs for transmutations, and some UI improvements.

For example, spending bonus points awarded for leveling up is no longer forced on you in the middle of combat: now you choose when to do it from the transmutations menu. Similarly to Upgrade Relic, it only appears in the transmutations menu when relevant, and will blink purple to draw attention to itself (even if you have turned suggestions off, though the transmutation button itself will not blink in that case.) Even when you activate it, you do not need to spend all, or even any of your points, you can back out and continue to wait if you find some reason to do so. 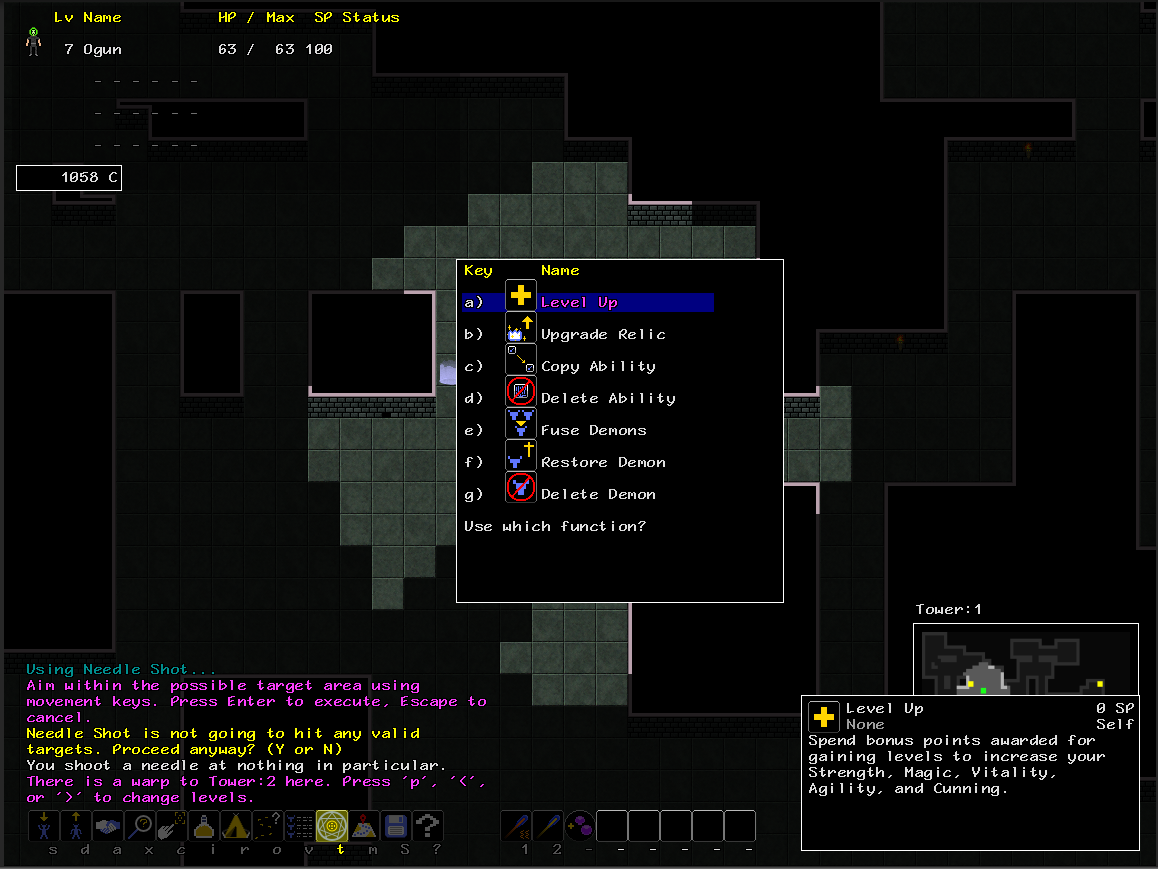 I’ll have more information about what’s in the next build soon.

When I was a kid, I had a pet hamster that used to run in a very odd fashion. It would dash forward several steps quickly, then stop and wait for a few seconds before dashing several more steps. It’d wait again, dash again, etc.

Funny enough, my approach to game development is somewhat like that too.

Demon’s had a couple of big changes recently: the addition of currency and the systems that use it, and the shiny new relic upgrades. Think of those as one of the dashes.

Now it’s time for a period of consolidation and polish: look at what’s working with the new systems (and what isn’t), tweak things here, polish things there, add some content over here perhaps. Think of this as one of the waiting periods.

For the next period of development, the focus will be on:

I’ll have some more details about what’ll be in the first polish phase build soonish, so stay tuned.

This is the “real” relic upgrade build.

Links to the right have been updated as usual. :) There actually aren’t many changes from the 6/25 “preview” build, as it turns out: just a fix for the nasty Consume and Recycle bug, a fix for a negotiation sacrifice bug, and a scoring model change.

Before I get into details about the build itself, a small announcement: Demon development’ll be going mostly dark for roughly a week or so coming up. Short version is, I’ve had some pretty heavy real life stuff happen recently and I need to digest it. I wanted to meet my obligations to you folks before running off to do that though. If you want more details, I’ve posted about it here in the off topic section of the forum: http://forum.ferretdev.org/viewtopic.php?f=7&t=165

Relic Upgrades are a new feature that add new or tweak existing relic functions. Every relic begins with 2, and new upgrades can be chosen upon reaching 5th level, 15th level, 25th level, etc. They have a wide variety of effects ranging from simple discounts to existing functions as Copy Ability and Fuse Demons, to offering entirely new functions such as Soul Armor (the ability to make a demon’s resistances and Speed your own), Revelation (teach demons abilities from their modifier’s list), and Enemy Sense (can see enemy positions on your map.)

This build also includes several balance changes of note: “defeat X enemies in Y turns” capture mechanics have been made more challenging, multi-element attacks have had their SP costs reduced, Breath weapon cooldowns have been reduced a bit, and demon resistance tables in the mid and late Tower have been adjusted with a particular eye to making Fire vulnerability a bit less common. In addition to these bigger adjustments, some smaller tweaks were also made.

Finally, there have been reports of some new demons being added, creatures out of urban legend rather than proper mythology. But, sightings have been rather rare, with the notable exception of those chosen by the Vodun Mask: summoners of the Mask seem to much more frequently report sightings of these strange new demons than other summoners. Eh, it’s probably all nonsense though.

I hope everyone enjoys the new relic upgrades system, and as always, good luck in the tower.