Power and water’re back on, so I’m back home and back to work. Apologies for the delay, and thank you for your patience!

My part of the world’s currently experiencing some pretty ridiculously bad ice/snow/cold weather that has more or less completely knocked out electricity and now even water. I’ve made it to a friend’s place who still has power so I’m alright, but no real update/progress on the build to report unfortunately. I’ll let everyone know when I’m up and fully operational again. Thanks, and if you’re in this mess too, stay safe!

The next step, which I just completed, was finding and picking out references to use for the art for each of the new characters. This is usually a bit quicker than it was this time, but things went a bit slower this time due to the extreme age and extreme popularity of some of the characters involved. Both of those can create trouble in different ways. Extreme age can cause feast or famine problems: there may lots of references (making it difficult to figure out which one is most accurate to the original myth!), or there may be very few or none at all (making them hard to find.) Extreme popularity tends to flood the internet with lots of mythologically inaccurate depictions, also adding to the difficulty of finding good sources.

Of course, on top of those factors, this particular set I wanted to take a little extra time with since they exist at the Tower’s upper most floor.

But, now that is done, everything needed to begin creating the character sprites is complete. Next up, I’ll be working on my own version of those and also on the abilities for each of the new characters. (I tend to do both at once since my still frustratingly limited art abilities usually lead me to want to switch to another task now and then to give myself a break.

A tiny, if vague, progress update: I’ve finished picking out the new characters who will be added as part of the update. Barring any tweaks/changes later, it looks like there will be 17 new characters: 7 heroes, 7 unique demons, 2 minions, and 1 normal demon.

I will probably preview a limited selection of these once we’re further along and they have at least character sprites ready (or better, character sheets), but many of them will remain a mystery until release.

The run up to this next build is going to be a little different.

As discussed previously, I’m working on the 30th floor of the Tower: in other words, the official end game material. Normally I’d like to post updates showing what I’m working on as the build progresses, but this time around I think I want to keep things a little closer to the vest for anti-spoiler reasons.

I will probably still be willing to post some of the individual characters and abilities, but I will be avoiding any major reveals about what awaits on the Tower’s final floor. This means updates may be a bit sparse and low on content at times, especially early on in the build’s development.

This build will be a bit getting done, so please be patient with the timeframe and somewhat less informative than normal update content.

Thank you, and until next time, good luck in the Tower!

Here’s the small balance update build that includes some tweaks to Titan’s Fist and Faithful Heart’s upgrades, as well the addition of item icons to the Ontoclasm icon set.

I also fixed a small packaging error where the Licensed Art folder was missing from Mac and Linux downloadables.

The links to the right have been updated, so go grab ‘em! Good luck in the Tower!

These will be included in the upcoming small balance adjustment build, which I hope to release in roughly a week or so. 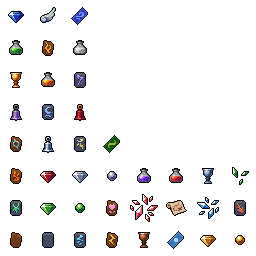 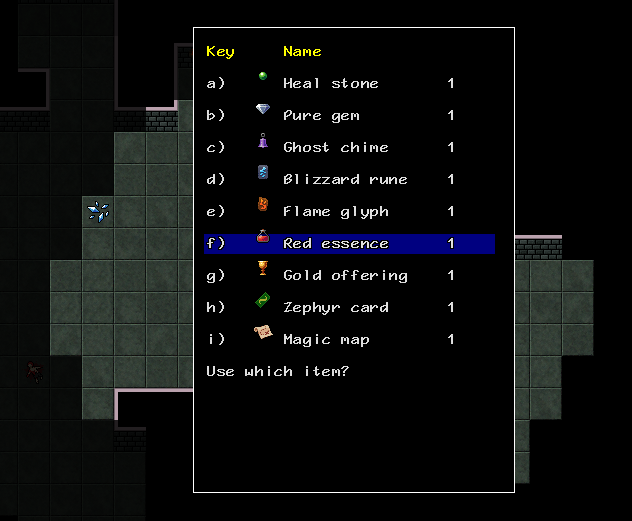 The main targets of the balance adjustments will be a slight tweak to the Aux Guard/Power upgrade numbers, and an adjustment to Revive Demon to make Faithful Heart a bit more appealing. See you again soon!

Wanted to drop a small update: I’ll be posting another build early-mid January with some further balance adjustments and new item icons from Ontoclasm

In the meantime, enjoy another piece of fan art by Zyalin.

I’m not sure how this Summoner and his gandayah friends escaped the Tower, but I wish them a happy new year too. 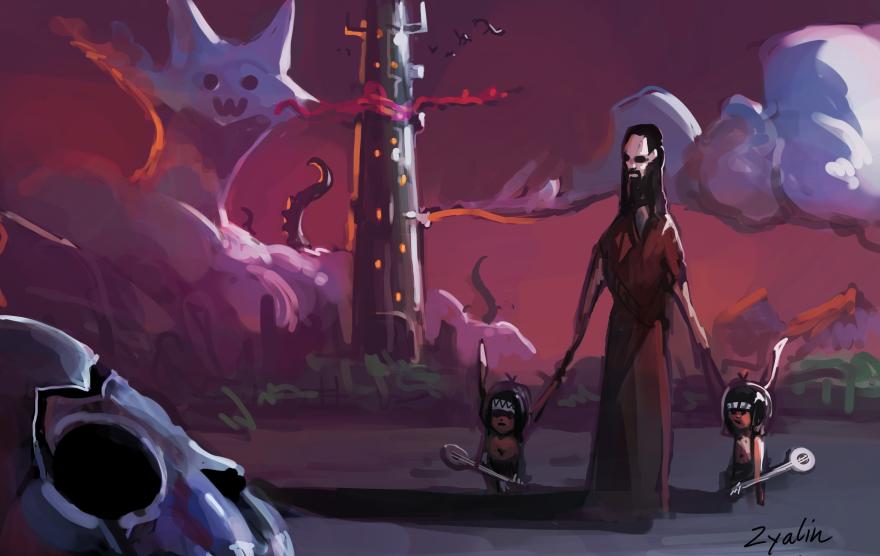 The new build is ready and released! The links at the right have already been updated, so go ahead and grab it! 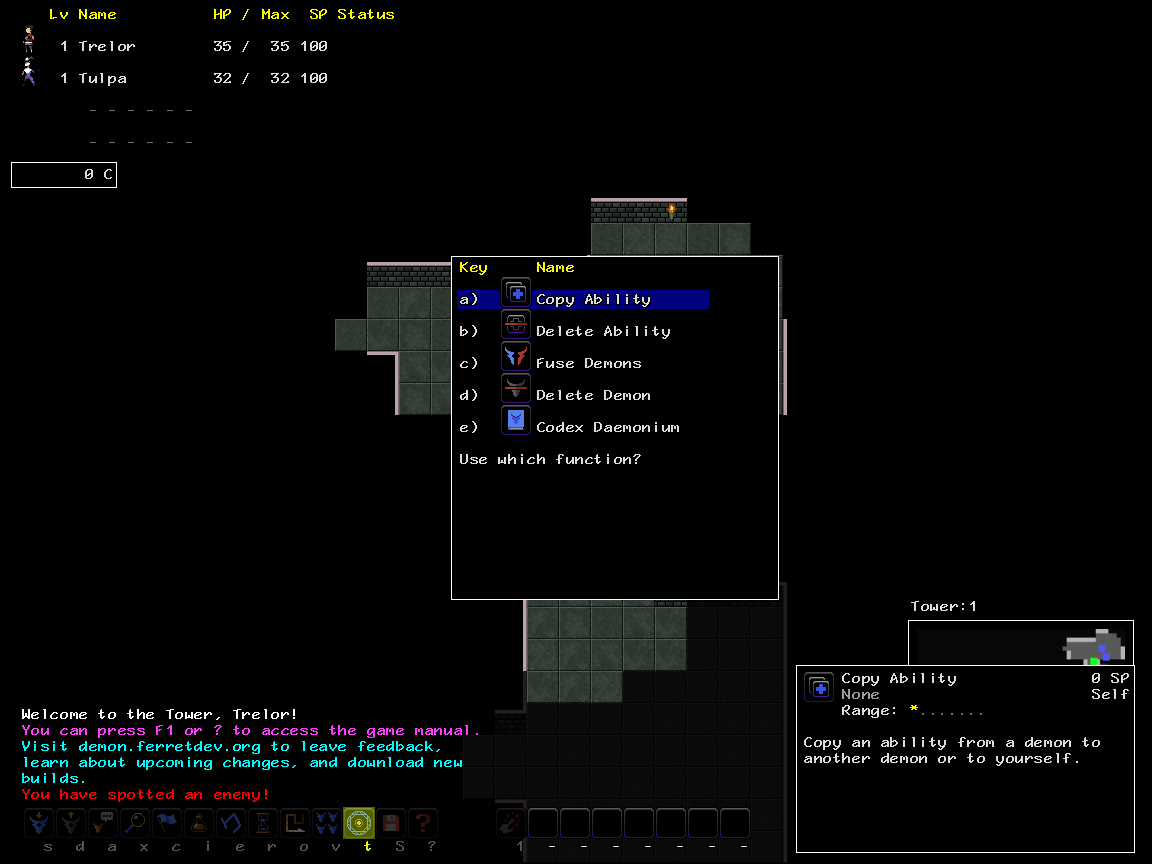 The two main features of this build are the new Ontoclasm icon set and a fairly extensive balance pass focused on cooldown abilities, Light and Dark “conditional” attacks, and Relic Upgrades including significant changes to Aux Guard and Aux Power, the Titan’s Fist starting upgrades. In particular, I think the new Titan’s Fist plays much better and feels more in theme for Demon, since it now requires you to have at least one demon out, rather than being able to (and encouraging) dropping to zero demons, which isn’t really very Demon anymore.

I should also add this would be a good time to give cooldown abilities a chance if you haven’t been impressed with them before. Specifically those with Light, Dark, Presence, and Breath cooldowns, which were significantly improved as part of the balance pass. But on the flip side, you should probably beware of enemies who use those abilities, for they have also benefitted from the balance pass they received.

As always, I hope you enjoy the new build, and good luck in the Tower!