Still hard at work on the next build, it will be a bit more of a wait than usual but should prove worthwhile.

The big ticket items will be the new Sanctums (and new uniques to populate them!), some new non-unique demons to fill out a few gaps in ability availability in the mid game, and some tweaking of the Strength changes as we work to settle the balance between physical and magical builds.

The new Sanctums are the most exciting bit to me.

Nine new Sanctums will have the possibility of being generated, bringing the total pool to ten. Five of these ten are used in each game, giving you plenty of extra-dangerous content to explore if you’re feeling brave/greedy enough to try them.

The new homeowners are eager to see if they can match the rather infamous deadliness of Turdak’s Sanctum.

I hope everyone’s enjoying the 8/3 build in the meantime.

My next time update will include some information on some of the new demons you’ll see in the next build. Cheers!

The blog, some forum functionality, and the scoreboard were down for a little bit, but all should be back in working order now. Thank you for the help Jason, and thank you to everyone else for your patience.

The new build is coming along nicely.

A few more screenshots of the new Sanctum decor for you here, showing some of the flavor bits.

There will be a second version of this set with different  coloration and different flavor bits too, to give some variety to the various Sanctums you’ll be encountering in the Tower starting with the next build. 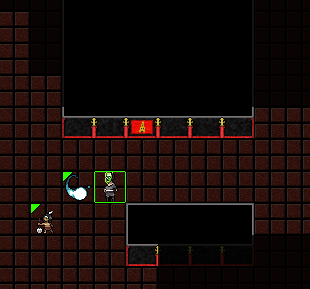 Not much to show of it yet, but I’m working on finally, finally updating the “sanctum” terrain art to match the style of the rest of the terrain sets.

Since the set won’t be embarrassingly out of date any more, you may soon see other demons establishing sanctums within the Tower…

Anyway, I’ll have more of it show once I’ve done the custom detail pieces.

Demon’s itch.io page is now live! With luck, we’ll have some new folks running around in the tower soon. 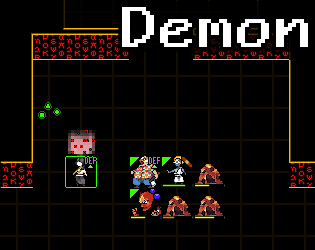 Grace has created another awesome piece of fan art for Demon.

This one is of a Chindi, a type of ghost some Navajo religious beliefs will haunt the possessions and dwellings of the recently deceased. If these things are not abandoned, the Chindi will haunt those who claim them, sapping their health and eventually killing them if the objects are not discarded. 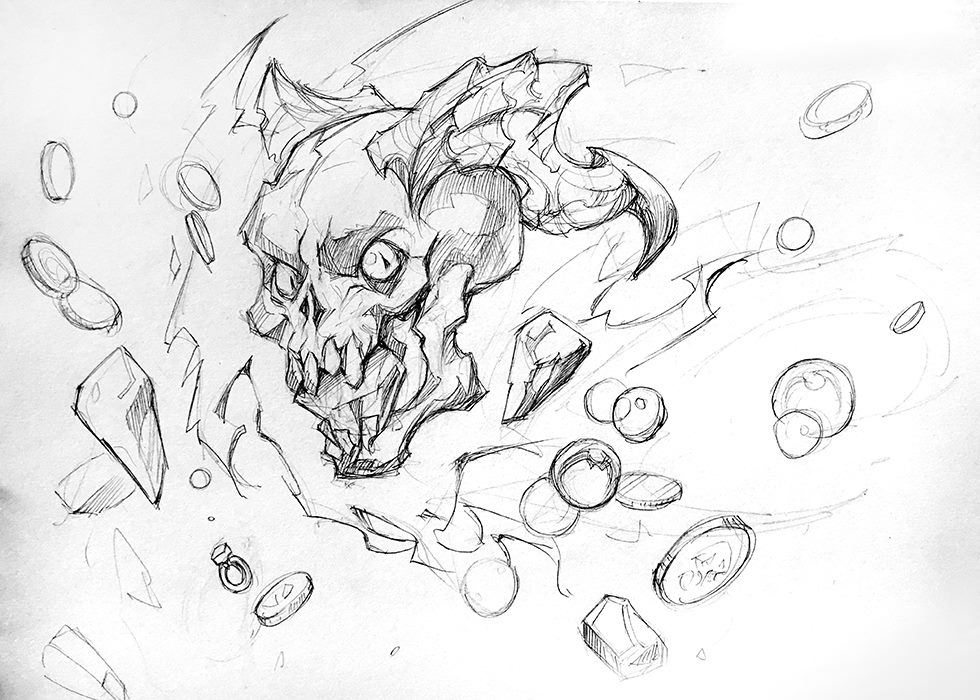 Apologies for being a little quiet this week, I’ve been working on an itch.io page for Demon, in hopes of expanding the player base a little bit.

Should be finished very soon, then it will be back to work on more important things… like the next build.

The new build is out! Downloads available at the links on your right like always.

Several significant changes present in this build: a significant revamp of Light and Dark abilities, tweaking of the Credits costs for most transmutations, Strength now reducing damage taken from attacks, and several UI improvements and performance boosts as well. The previous post (and the change logs included with every build) can give you more details if you want them.

Enjoy, and good luck in the tower. 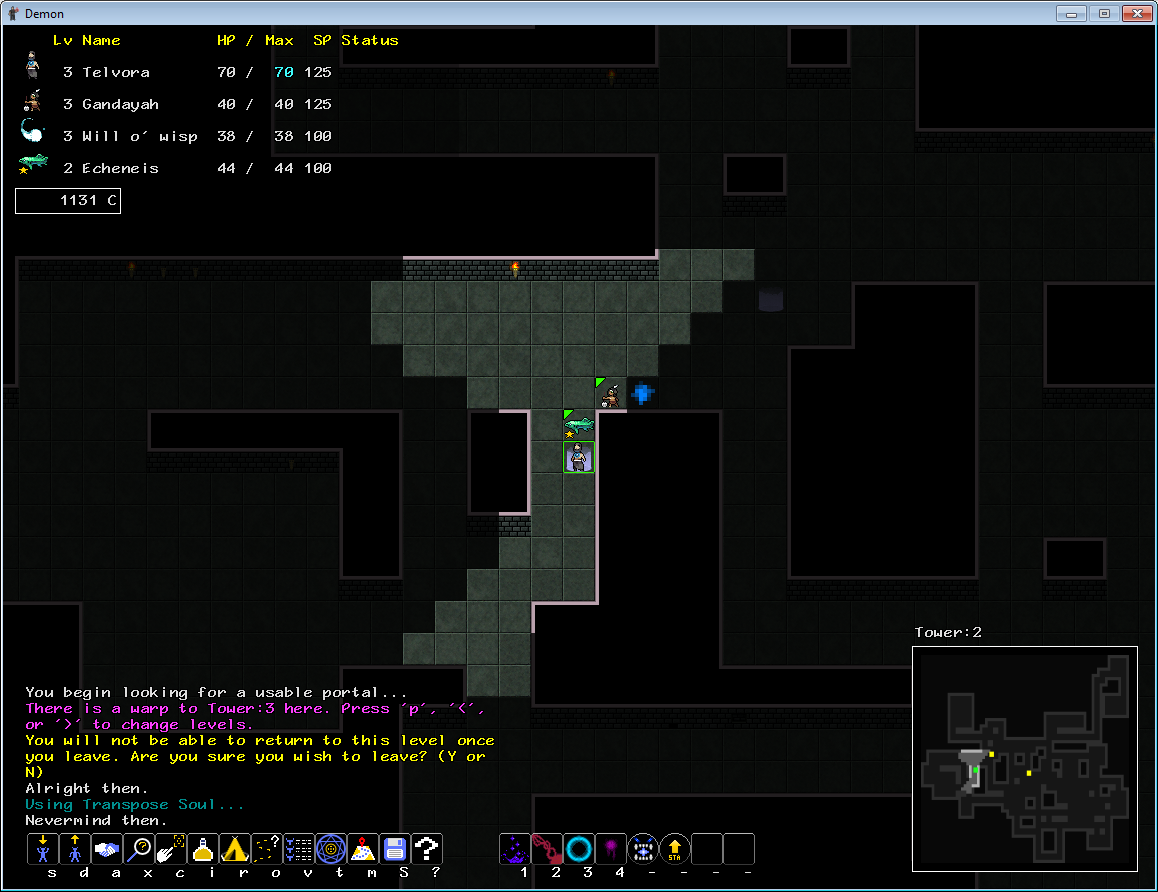 Here’s the rather extensive change log to give you guys something to read until it is ready for release.

Unity 5 Update
- This is the first version of Demon to use Unity 5, as opposed to Unity 4.
- Significantly improved performance achieved in part thanks to finally having access to profiling tools.

Revamp: Light and Dark
- The majority of Light and Dark abilities have been significantly changed, and several new ones have been added.
- In general, single-target smite abilities now have few or no restrictions other than brief cooldowns, and multi-target smiting is available under the right conditions, with longer cooldowns.
- There are also a wide variety of passives available which modify Light and Dark attacks based on various conditions being met.
- The hope is that this will make both elements more interesting and fun to use and battle against.
- Relic and demon ability sets, modifier ability sets, and the like have been adjusted as a result of these changes.

Revamp: Credits
- Most Transmutations that involve demons now use the demon’s starting level in the cost formula, rather than the demon’s current level. This includes: Copy Ability, Restore Demon, Fuse Demon, Revelation, and Recycle.
- Several costs have been adjusted directly, in addition to the previous change. Most notably, Copy Ability is *significantly* cheaper.

Balance Changes
- Strength’s bonus now adjusts non-status condition damage taken by characters. (Yes, characters with low bonuses will take additional damage.) Several stat tables for relics and characters have been adjusted to account for this change.
- Enemy bonus MaxHP generated at spawning is no longer random; thus, enemies with the same stats and abilities will always have the same MaxHP and no longer need to be individually inspected.
- Nightengale no longer recovers SP or time-based cooldowns at an increased rate.
- Enemy Sense’s extra encounter now spawns a bit further away from your current position than before in hopes no one else will be trapped in a corner by a surprise extra encounter with an enemy summoner…
- Self-buffs are no longer available from the Blessed and Imbued modifiers.
- SP damage/drain effects now damage/drain more SP.
- Heroic Resistance now applies to SP damage/drain.
- Adjusted the SP costs and cooldowns of Buff/Debuff ”battle cries.”
- Lucky Charm now clears the target’s Luck cooldown instead of reducing it by 1, but has a higher SP cost to compensate.
- Satyr have swapped Might for Alert, making them more annoying, but less deadly.

AI
- The AI is now a bit more selective about using effects that give turns to or stagger targets.

UI
- When the main character levels up, you are no longer immediately forced to spend the points at once. Instead, Level Up is now in the Transmutations menu whenever the player has bonus points to spend.
- Note that Level Up being an option will ALWAYS cause the Transmutations button to glow, even if suggestions have been turned off!
- Cells containing entities that will be affected by an ability are colored differently in targeting UI now. This is most useful when using abilities that only affects targets that meet certain conditions.
- Selecting an ability again while you are selecting a target for it will be treated as an attempt to confirm usage on the currently selected target. This applies whether you are clicking on the ability’s hotbar button or pressing it’s hotkey button.
- If you end up with too many or duplicate demons, you are now forced into the Transmutations menu until you resolve the problem (as opposed to being forced to delete one immediately.)

Bug Fixes
- Effects that check % of HP rather than dealing direct damage or healing now work as expected on heroes or those under the effect of Heroism. The same is also true for Minions.
- Draw Wounds no longer reduces bonus MaxHP when used.
- Target area glow is no longer erroneously darkened during some uses of the targeting UI.
- Fixed a centering issue in the Your Score display.
- Corrected some typos and control labelling errors in the manual.