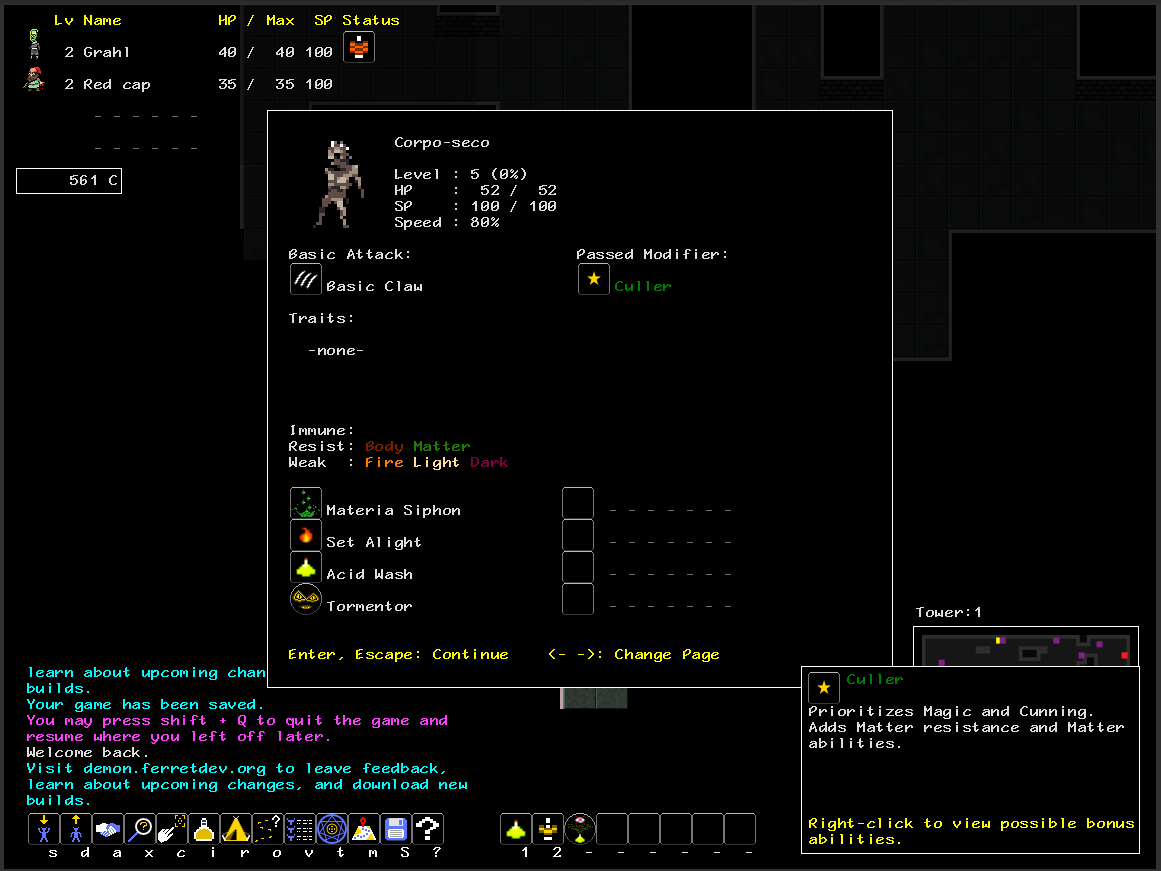 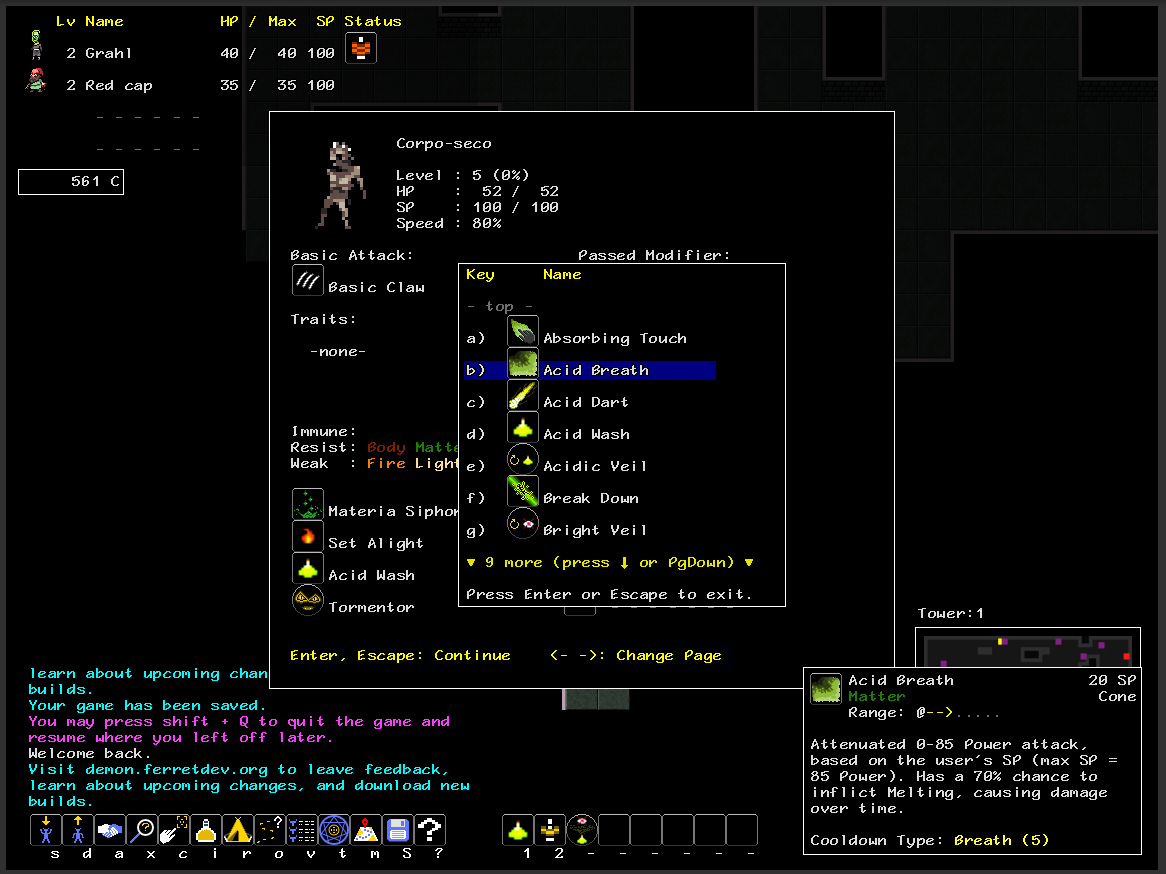 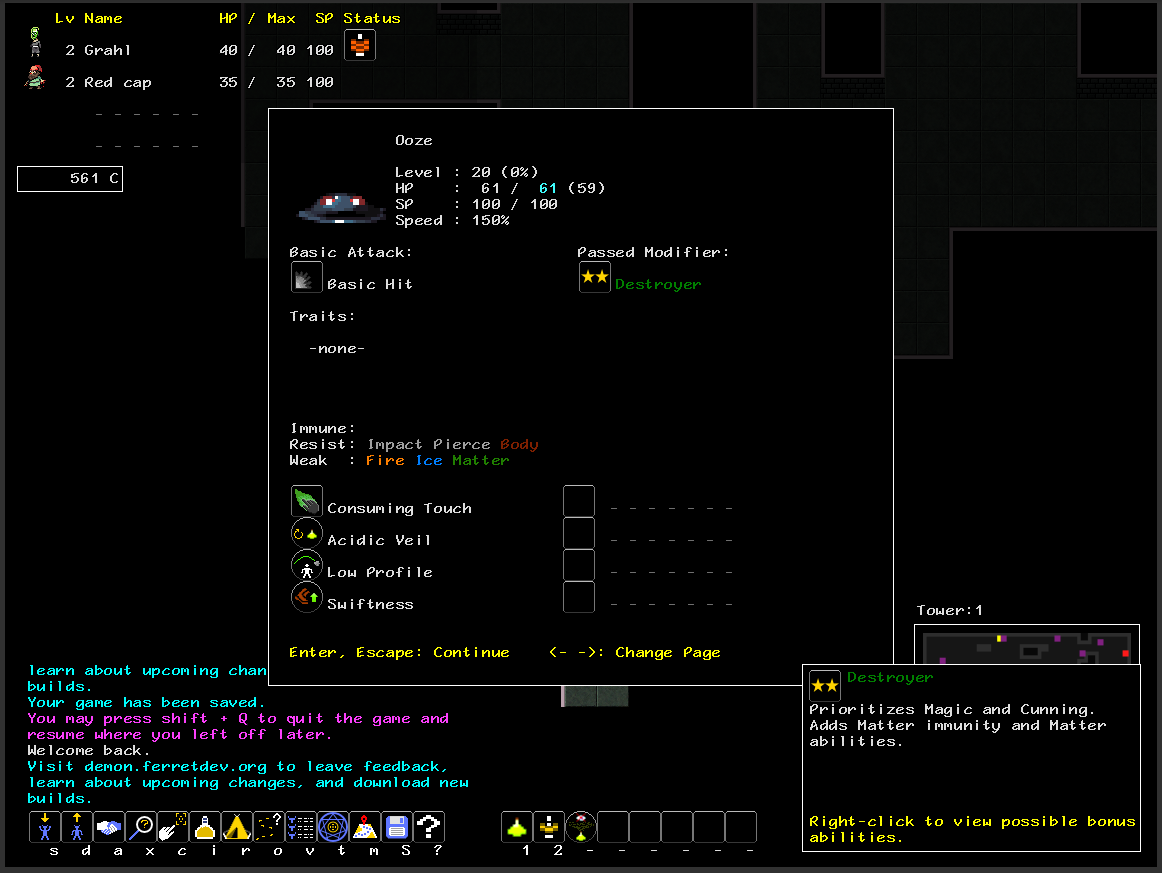 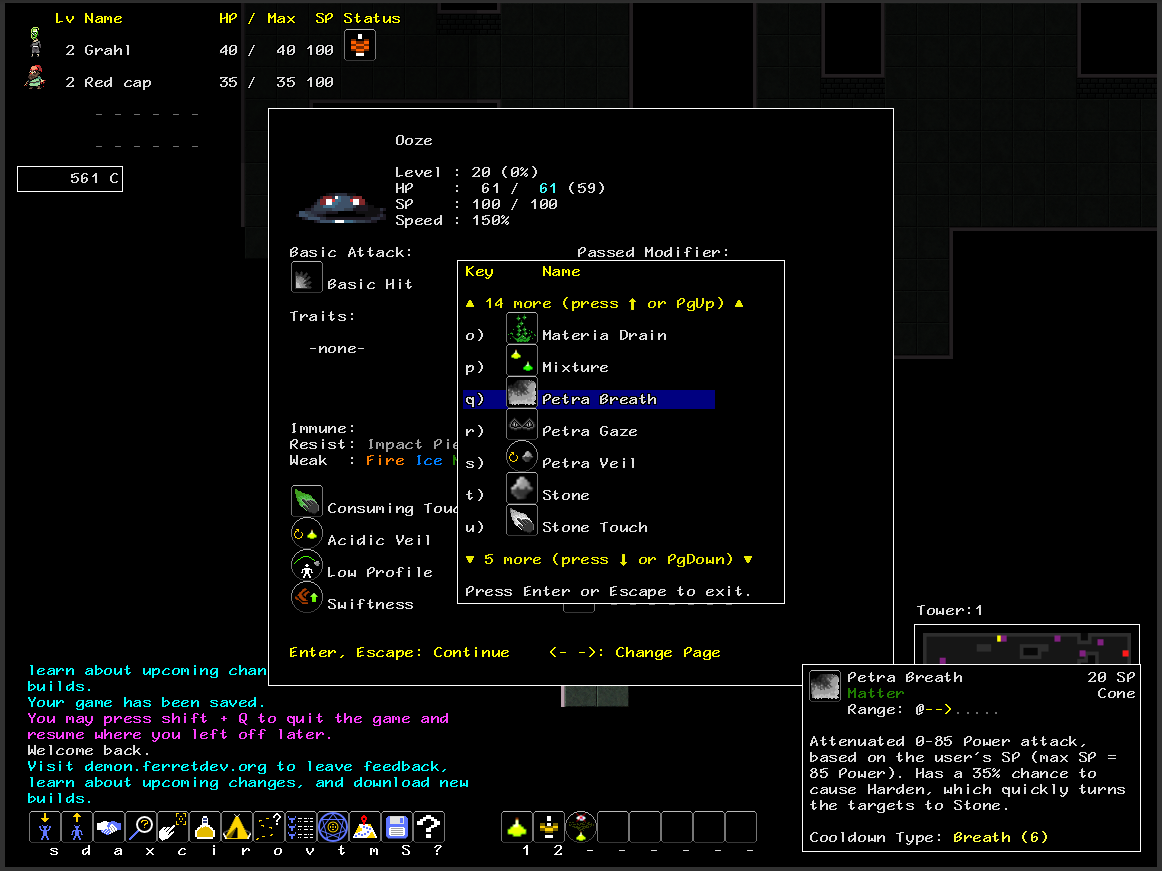 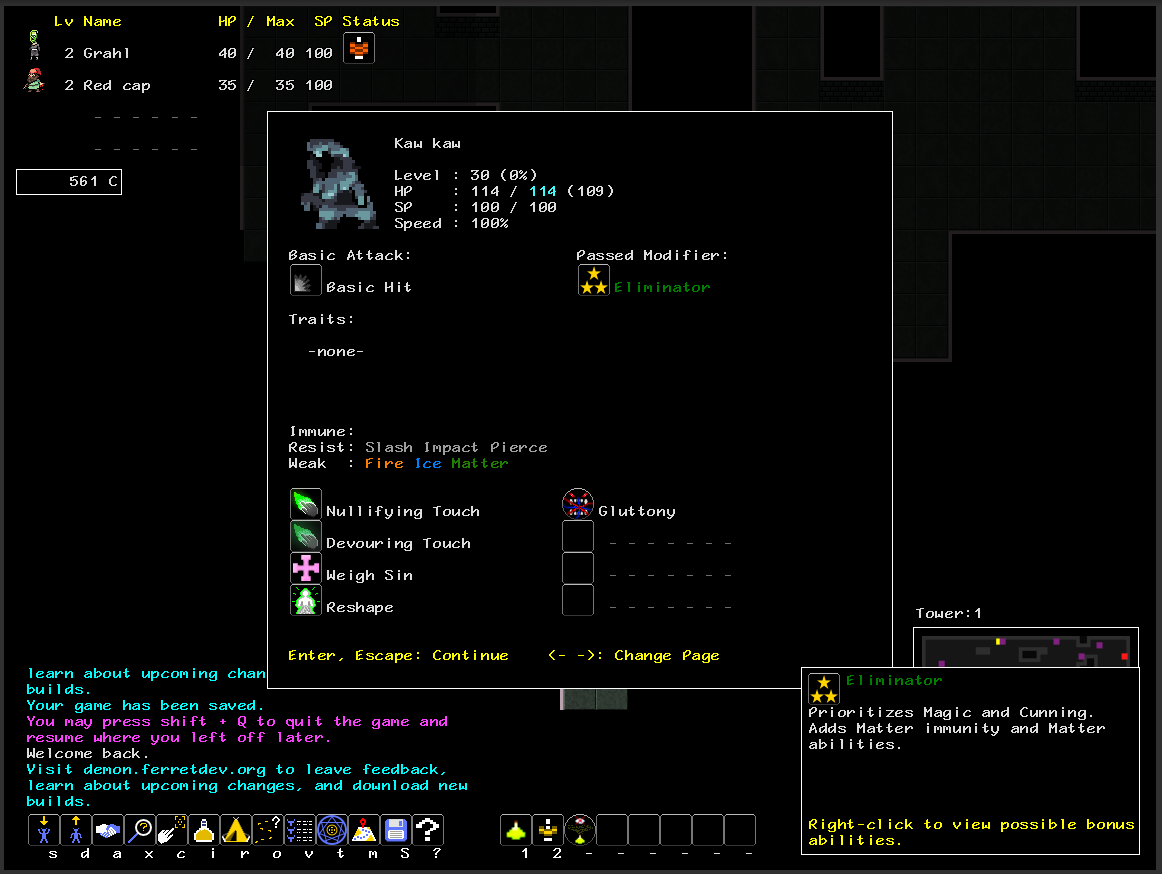 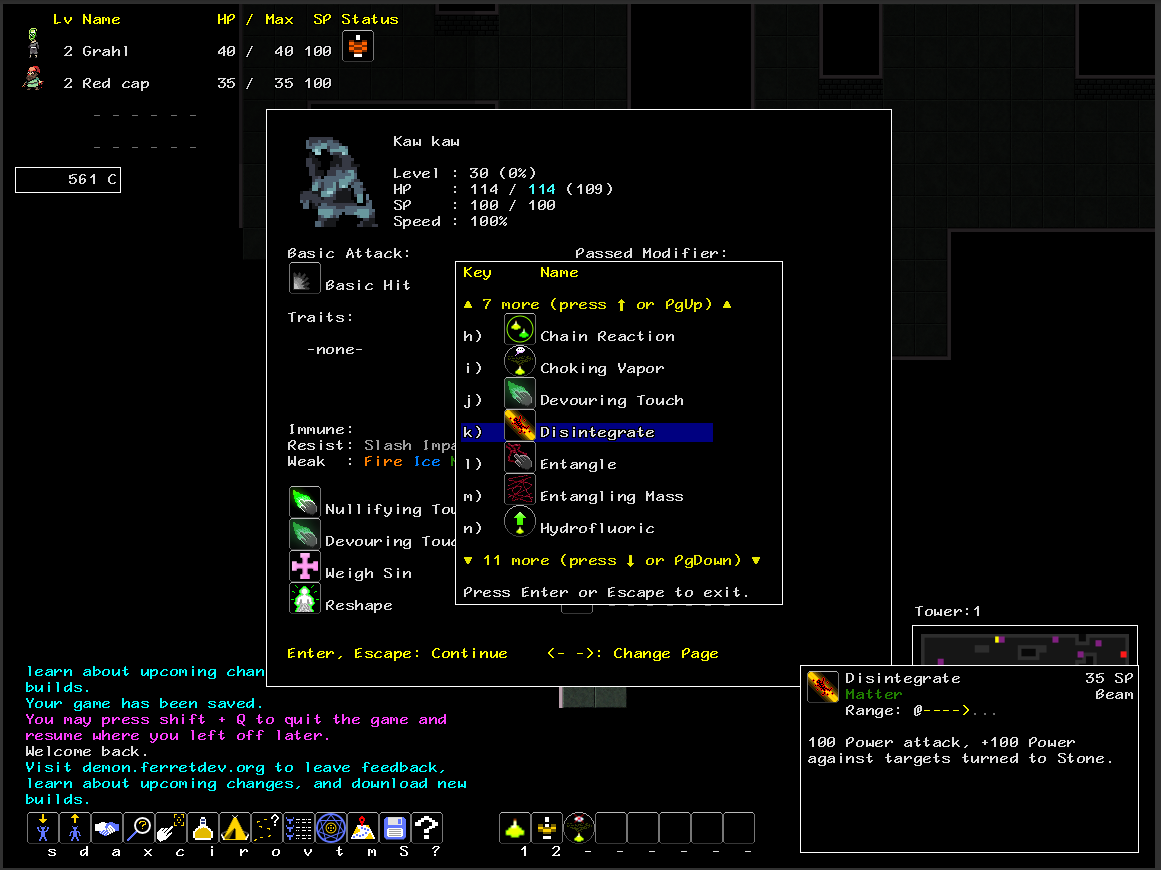 Of course, there are some changes to other modifiers as well: many of the physical modifiers gained some new passives and attacks related to dealing out or removing Matter status effects, the Healing modifiers gained the access to the new Matter effect removal abilities, and many of the unique modifiers had some Matter-related abilities added as well, including Kamapua’a, Python, Anzu, Friar Rush, Headless, and others as well.

As previously mentioned in the last post, I just finished implementing the abilities for the Matter build.

Fair question you might be wondering: what all is left to do before I can release it (or at least, release the preview/test build)?

1)  My versions of the character sprites. (Probably the biggest chunk left, but I’ve done some already at least.)
2) Creating new modifiers, updating existing modifiers.
3) Updating character creation (adding Matter options, resistances/weaknesses when appropriate)
4) Capture mechanics for the new demons
5) Placing all the new demons into encounter charts
6) Sanctums for the new uniques, when appropriate
7) Deciding which bugs on the bug list I want to address before release, and addressing them

The good news is that *most* of these are relatively small tasks. 1 and 7 are probably the biggest ones left.

The better news is that I will be able to release a preview/test build once 1-6 are complete. 7 will be what I work on while people are playing that and sending feedback and bug reports.

Still going to have to avoid an ETA for now, but we’re closing in on the end. After the Matter build is out of the way, I’ll write up another post about how I’m going to approach things going forward in hopes of avoiding any more 5-6 month build cycles while at my current somewhat intense job.

Thank you for your patience everyone, I hope to reward it with something more than words and pictures soon.

A small preview to celebrate finishing the last ability implementations for the Matter build: three Matter build demons who are perhaps more notable for the new non-Matter element abilities they possess. (Hat tip to OneEyedJoe for correctly predicting the existence of one of these abilities. 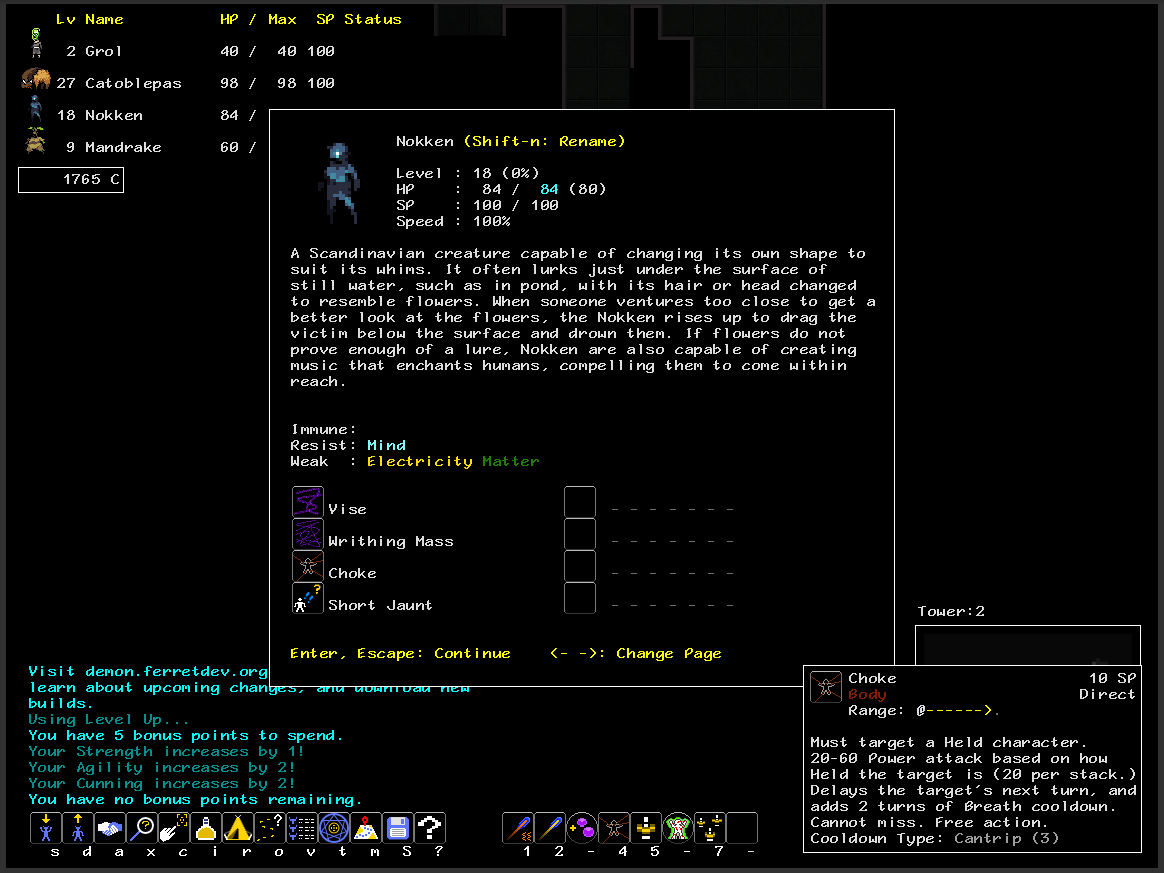 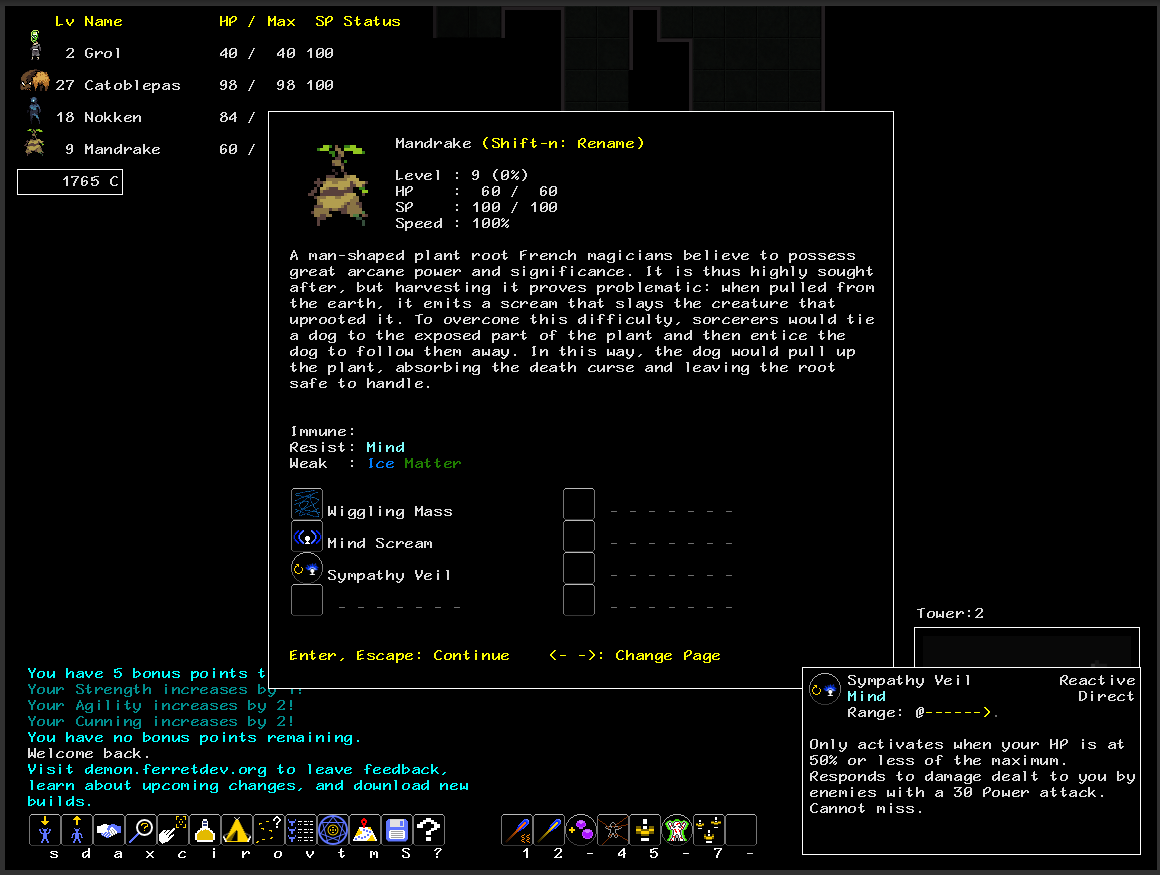 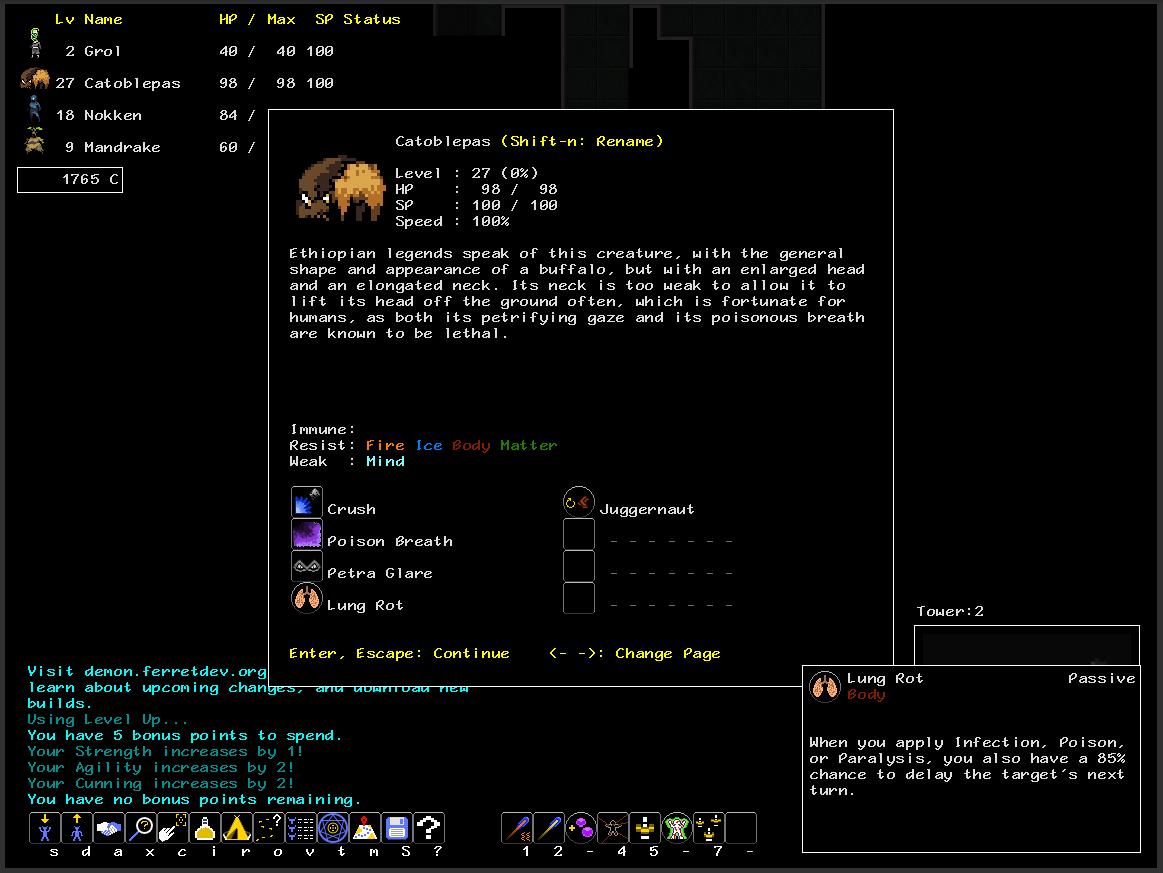 The last new status effect being added for the Matter build is “Held”.

Held shares similarities with both Chill and Poison: like Chill, it reduces accuracy, evasion, and movement speed. Like Poison, it can stack up to three times, with the effects getting more severe each stack: 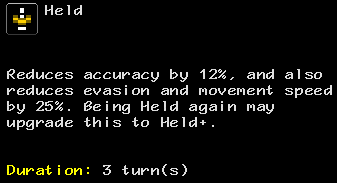 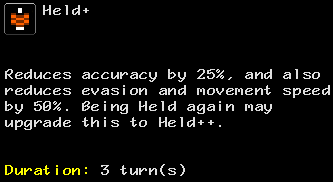 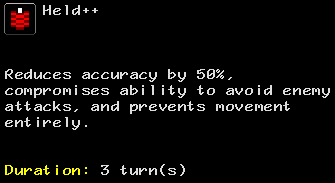 Notably, as shown above, Held++ completely prevents movement of any kind (except of course, for abilities like Short Jaunt or items like Wind Card, which specifically call themselves out as not counting as movement.)

Additionally, there is another new mechanic used by many demons with Held abilities: 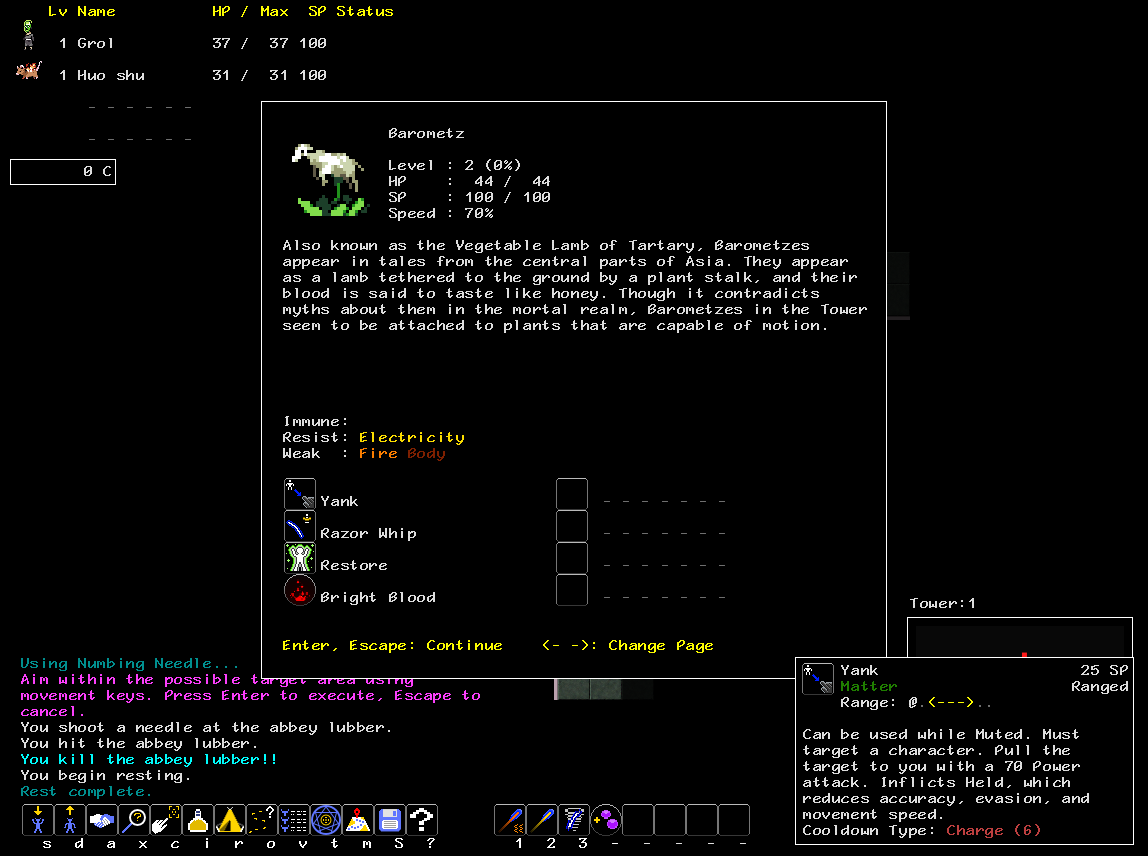 That’s right: “Pull” abilities now exist in Demon! Yank (and its stronger, longer ranged, later Tower cousin, Snatch) allow you to pull a target adjacent to you while also automatically inflicting Held. These abilities are commonly employed by slower moving, plant-like demons who otherwise might have trouble pursuing their enemies.

As bad as being turned to Stone is by default, it can get even worse, as a couple of Gandayah learn the hard way… 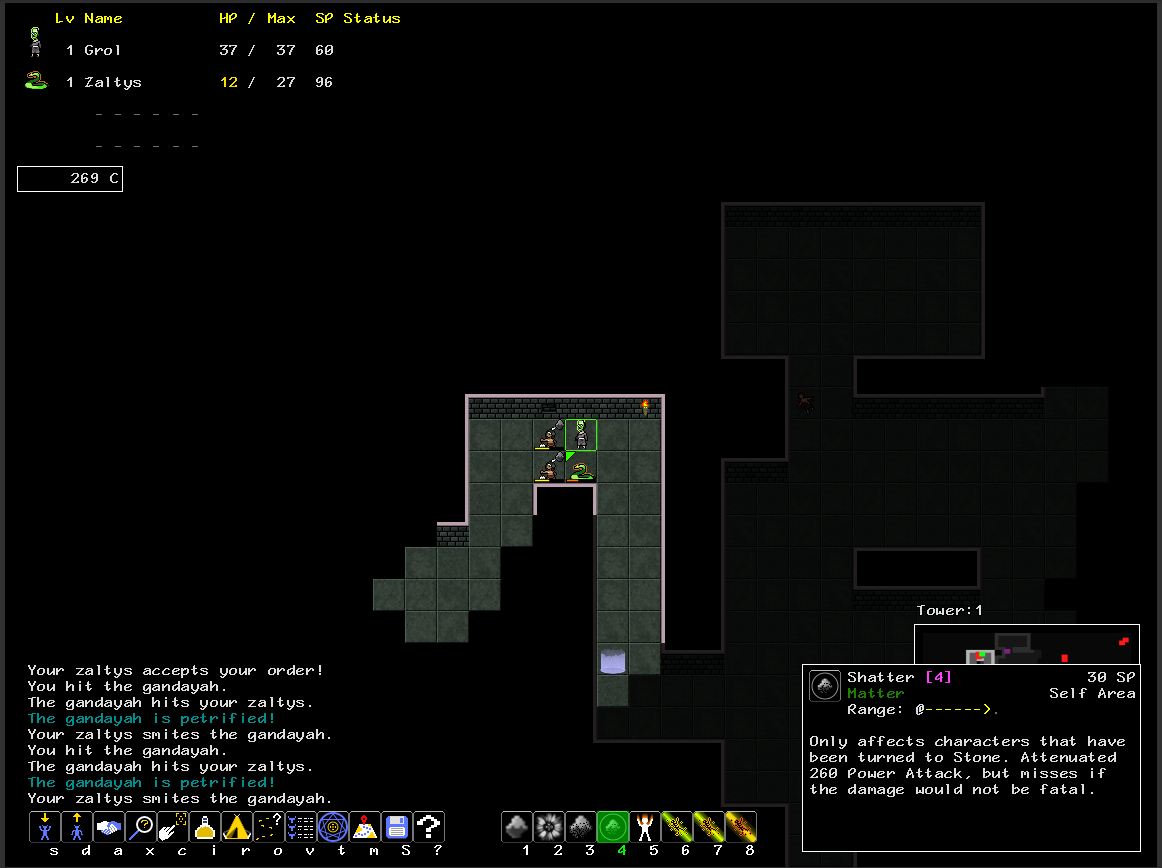 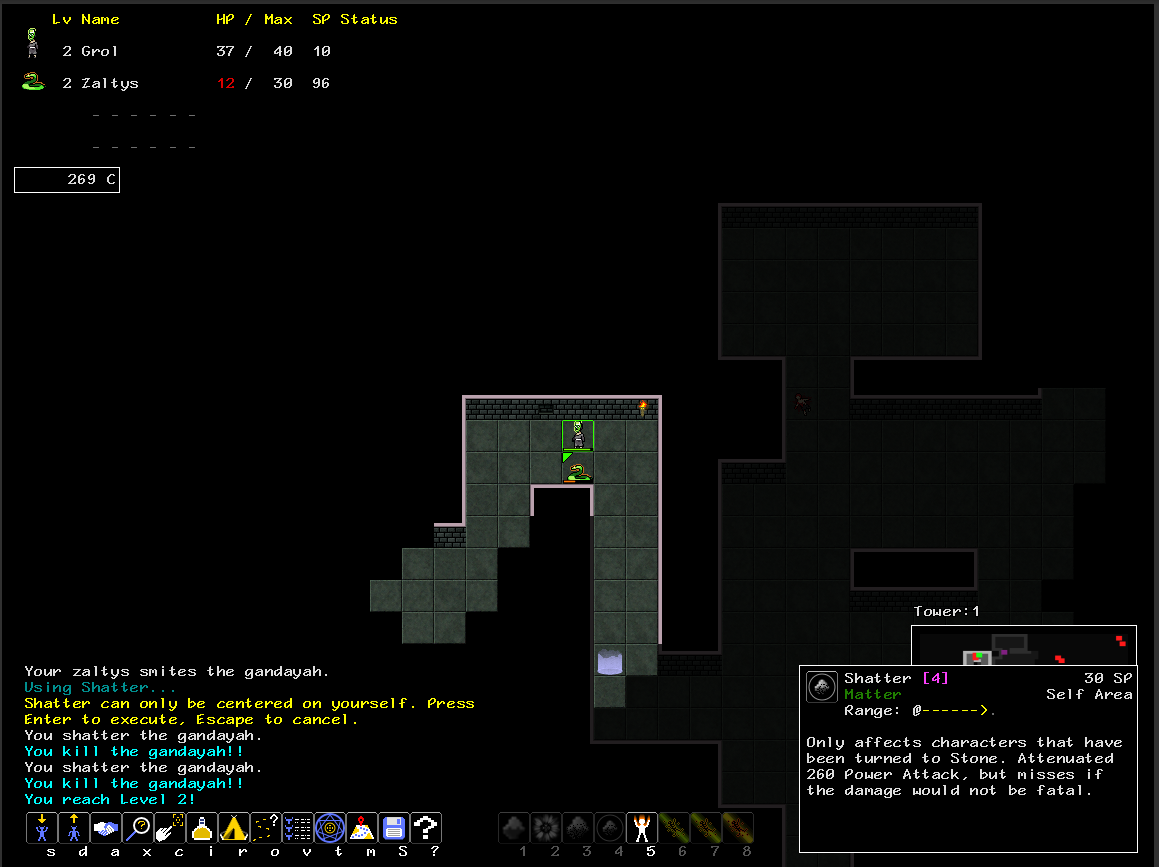 In addition to the horrifyingly high Power instant-death-to-Stone-targets causing Crumble and Shatter, there are also the disintegration beams, which deal double damage to Stone targets, and a few melee attacks that exploit the status effect as well.

(An astute observer will note the Gandayah did not seem to be weak to Shatter.

As it happens, being turned to Stone is pretty horrifying. 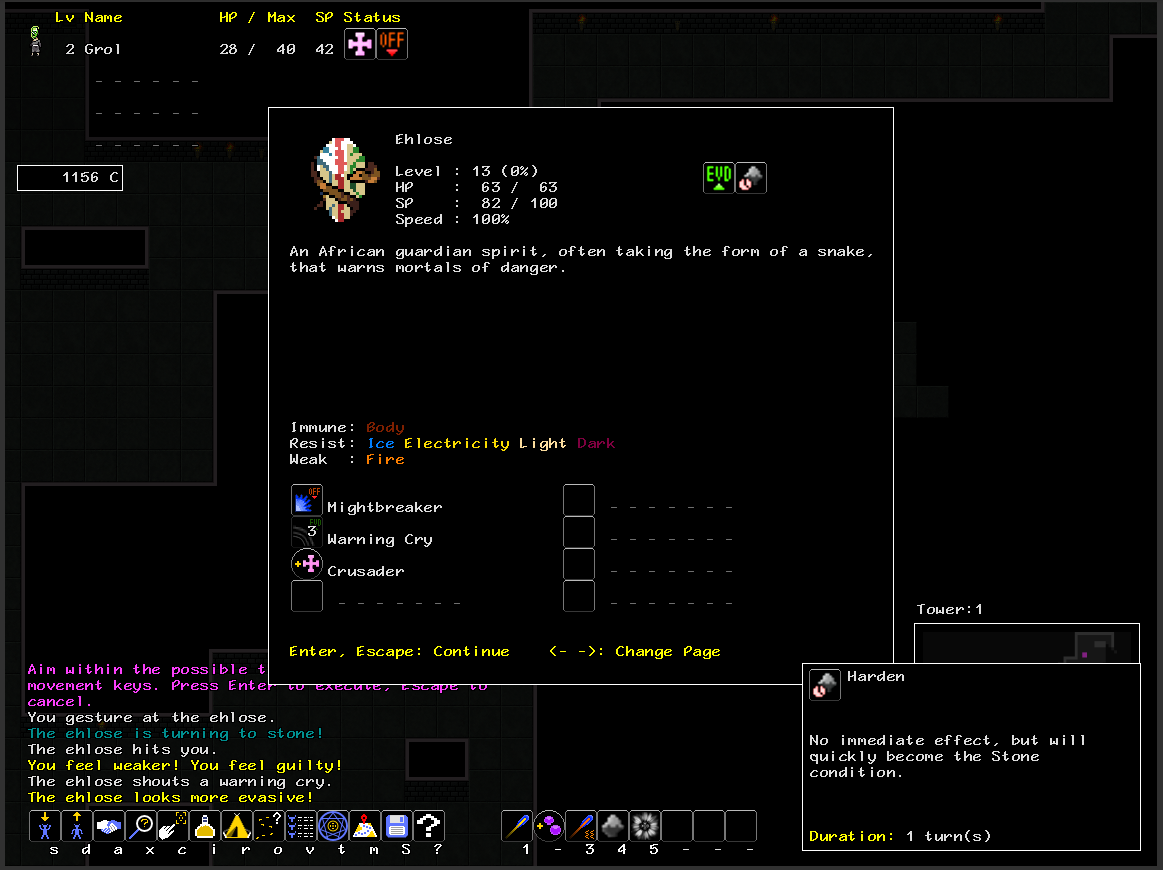 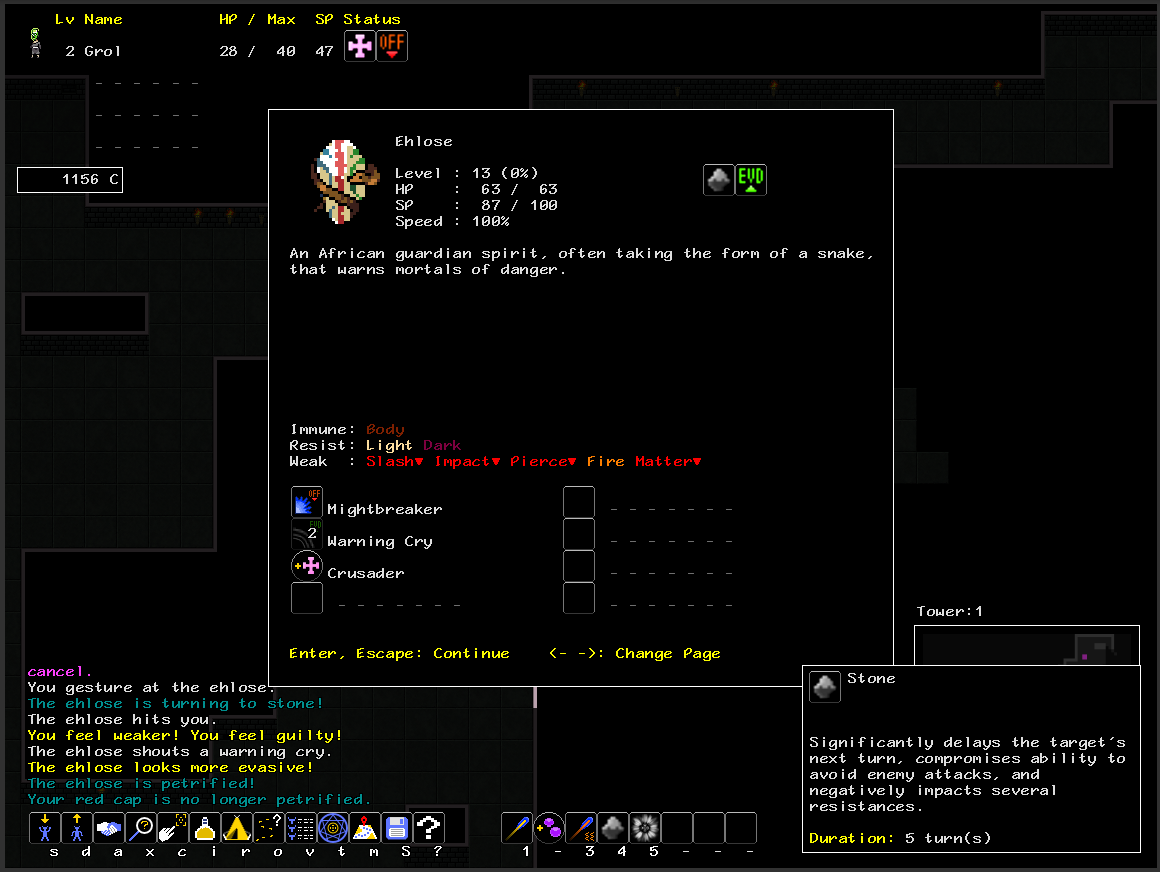 Just wanted to drop a line on the current plan.

Just wrapped up a major deadline at work on Friday that unfortunately had taken up most of my energy for the past couple of weeks. However, I’m on holiday break from now until Jan 3rd and after a few days to relax, I will be switching over to a heavy chunk of Demon work.

I can’t promise it will be enough to completely finish the Matter build… but it will get us pretty close at the very least.

Thank you everyone for your patience with the slower development pace while I’m working full time.

I think the wait will prove to be worth it.

Oh, and one last thing: I’ll announce the details on the forum at a future date, but I plan on doing a test run of this build before wider release. You won’t need to sign up or anything like that, I just will be posting the build links in the forum instead of in the usual spots so that I’m more likely to hit people aware of the fact it’s a test build and who are okay with the fact it may have bugs (even very nasty bugs, potentially, though I hope to catch most of those before even the test build, especially since I’m not taking great pains to limit distribution.)

And now, a few examples of some old and new demons who use Acid attacks. 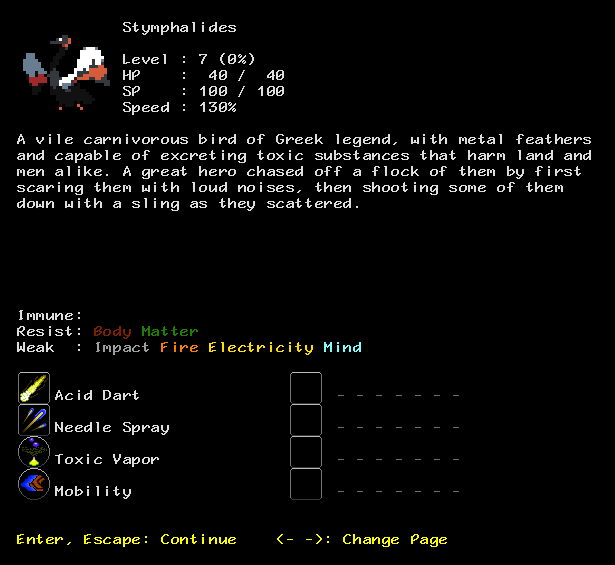 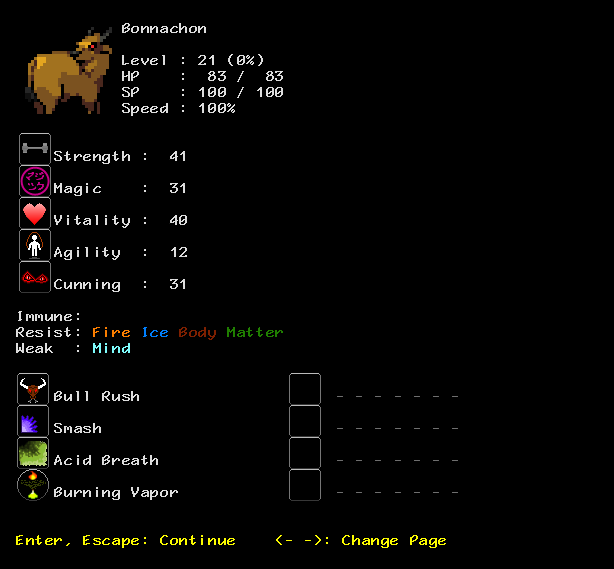 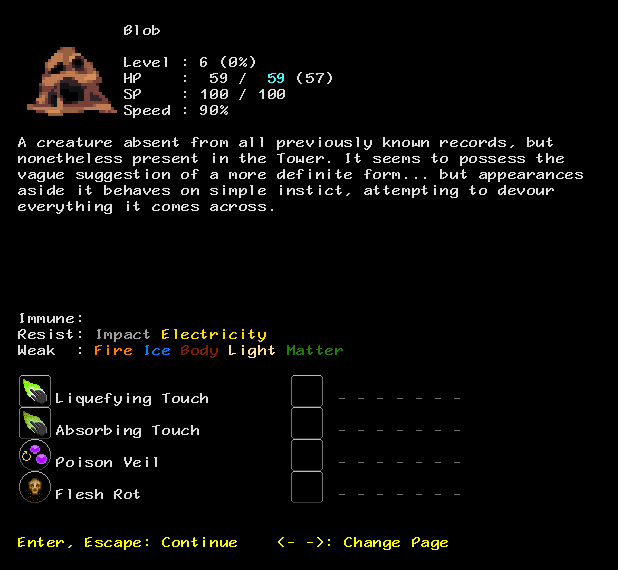