New build is up! Links at the right have been updated to the 9/30 build.

The main two changes in this build are Demon now running on Unity 2017 (instead of Unity 5), and what I hope is a significantly improved experience with full screen mode, particularly on Linux systems. Many thanks to Tchey for his help in testing solutions to the full screen issues, since I do not have a Linux system of my own I could test them on.

Other than that, the build includes a few bug fixes to abilities added in the previous build (most especially the Execute ability and its cousins), as well as a new hotkey for swapping abilities (the z key) that should be more friendly for non-QWERTY keyboards.

As previously stated, I will have to drop back to bug fix only / slower forum response times for a bit due to work here coming up, but it will only be for a couple of weeks. After that, it will be time to get back to Fun Stuff.

A little later than I’d hoped, but I should have the next build (with improved full screen mode and other fixes/quality of life improvements) ready by sometime this weekend.

I’ll probably have to go dark for a bit after that; we’re only about a couple of weeks out from a major deadline at work. But, once that is past, we’ll get started on something new.

Thanks to a lot of testing help from TChey, I think I will be able to release a build soon that has significantly improved fullscreen mode visuals, even on Linux builds.

The build will also include a few bug fixes for some of the new abilities, and a new keypress for ability swapping so that this feature is available on non-QWERTY keyboards.

After this release, I’ll need to switch to focusing on work for a bit as we head into a major deadline there, but after that, it will be time to start on some of the long awaiting feature builds that’ve been teased for some time now: things like Relic Preservation for Demons, Relic Upgrade Revamps, Demon Traits, etc.

I’m looking forward to those, and I hope you all are too.

Sorry for the slightly longer than usual blog post gap; work is starting to pick up again unfortunately, so updates/work speed will be dropping a bit.

The next build I’m working on is an attempt to fix “stretching” issues some players have been experiencing when playing in fullscreen mode, along with a few other bug fixes.  I’m hoping this won’t take toooo long, it’s definitely an “eat my vegetables” sort of build, but I’d promised to look into this some time ago, and am more than overdue on finally getting around to it.

Whoops: four modifiers had some misplaced abilities in them in the original 9/1 version. Updated the links to 9/1/2018_b. Special thanks to OneEyedJoe for spotting the errors (and so quickly to boot!)

New build is released, links to the right have been updated! 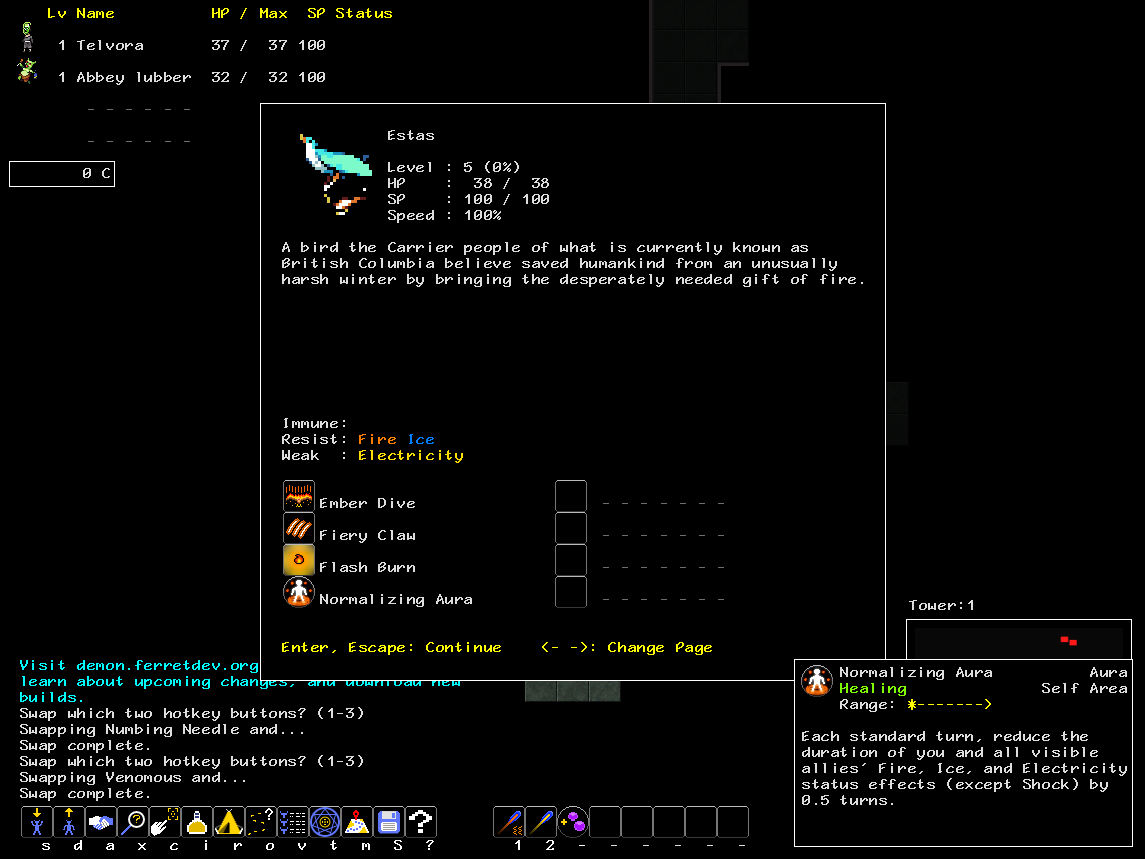 Close to 60 new abilities have been added to the game, in addition to a collection of bug fixes and quality of life interface improvements. Enjoy, and good luck in the Tower!