The new top of the Tower is bringing all sorts interesting abilities into play. Let’s look at four that together should prove interesting: Miracles!

First, the three Miracles themselves. Miracles are rather remarkably powerful abilities, often combining 3 or 4 different effects at once and applying them to all enemies or all allies. However, they use the Miracle cooldown: like the Soul cooldown used by Eternal Glory, Miracle only cools down as you gain experience: gaining 10% of a level decrements a Miracle cooldown by 1. (So, the miracles below recharge after gaining 40% of a level.)

The first Miracles being added are for Light, Healing, and Dark, but this is not to say that all future miracles will be of these types. 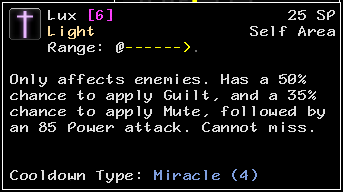 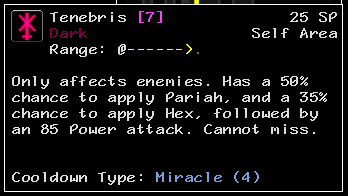 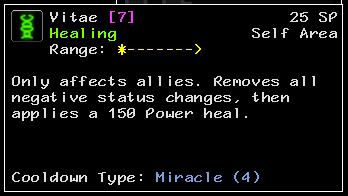 Also being added is one passive related to their use. A passive that only works with 3 abilities is a dicey proposition, but no denying it has a huge impact: 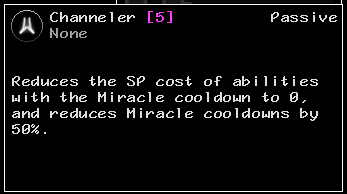 Channeler helps in two major ways: by reducing the SP cost to 0, it virtually ensures Miracles will be available in a pinch, and halving the cooldown also lets you use them much more often: at a cooldown of 2, you’ll probably be able to use a Miracle every other fight instead of only twice per floor.

You shouldn’t have to look hard to find most of these, should you reach the new floors of the Tower, as three of the four are on the same new non-unique demon!

Lots of new abilities are coming in the next build. While I work on finishing things up, I thought it’d be nice to do a few previews of some of my favorites. First up: Glacial Shell! 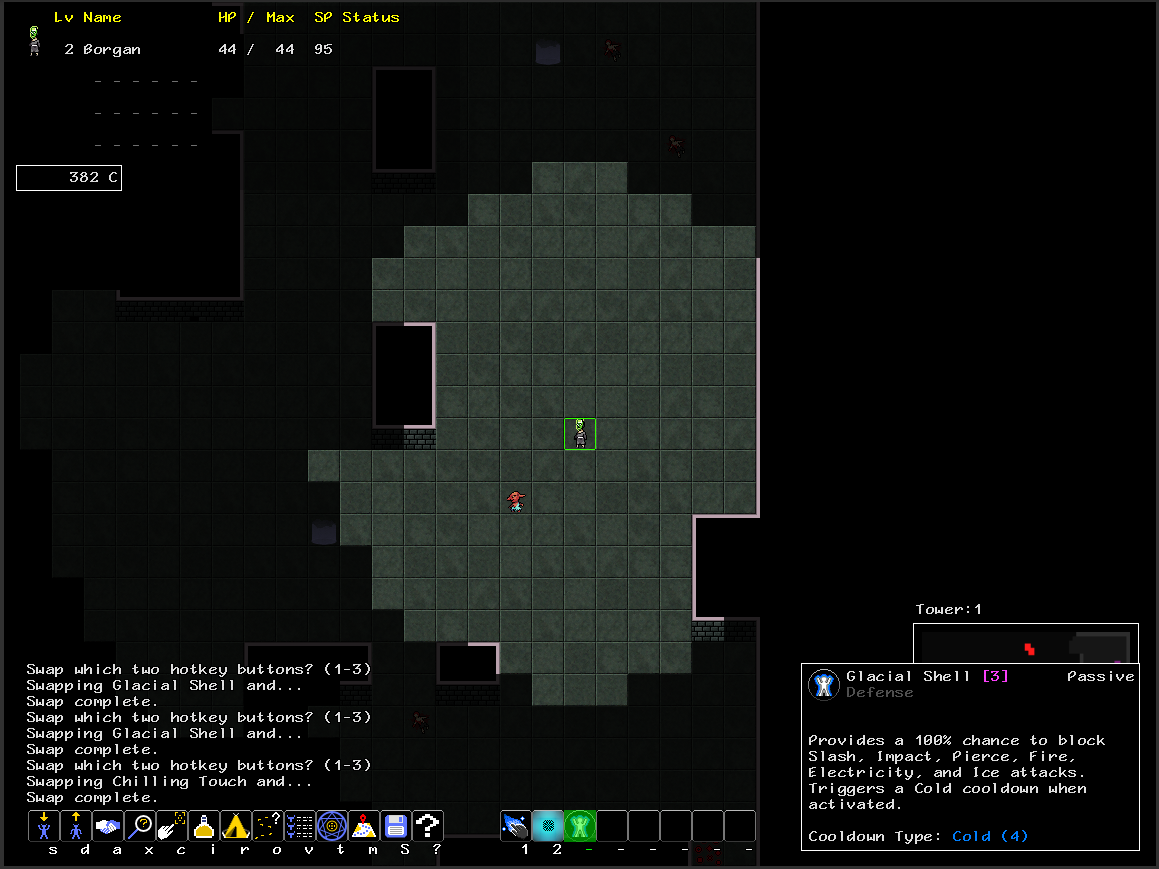 Already we see something new: a 100% reliable Block! 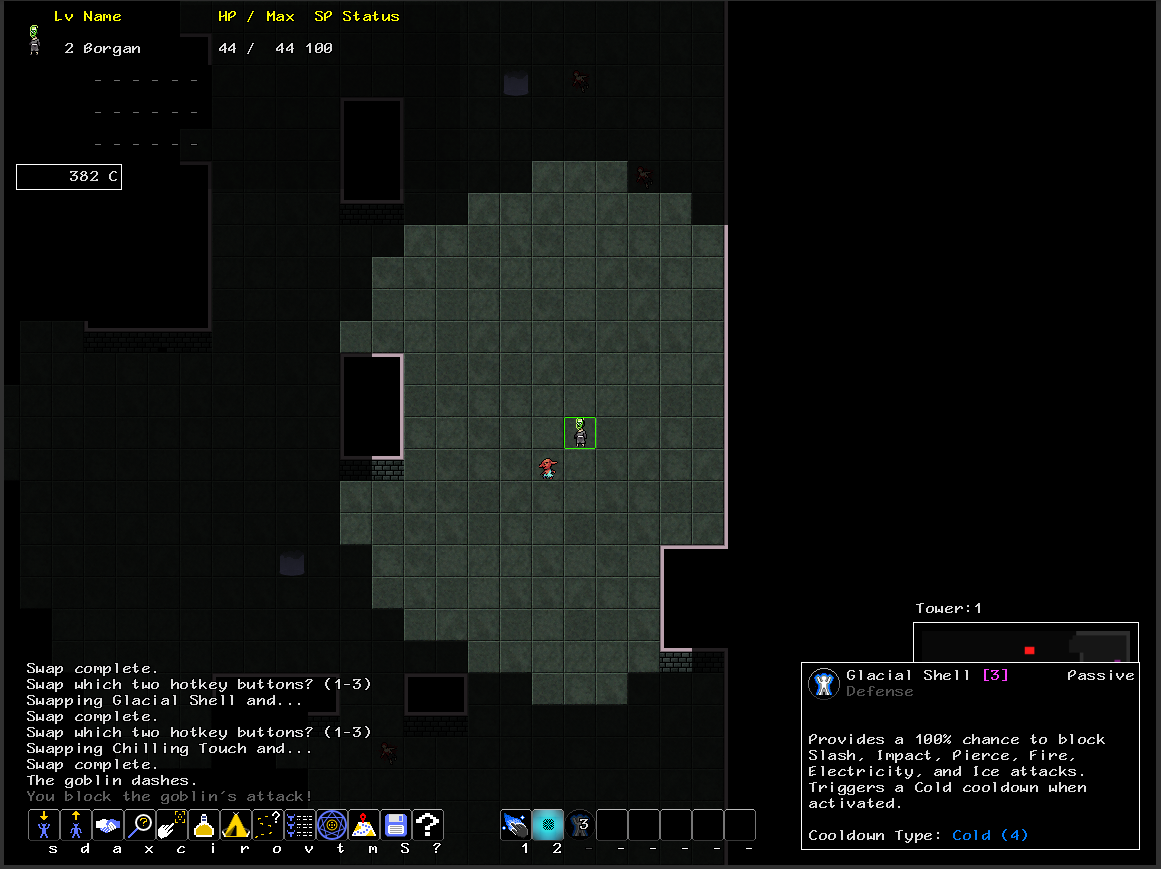 Of course, similar to Lucky Dodge, it has a cooldown that will trigger when it used. (Also like Lucky Dodge, the cooldown will only trigger if Glacial Shell was required for the Block. If you had other ways of blocking the attack, they may trigger first, sparing your sure-thing block for a later attack.)

But… there is more to see here still. The Cold cooldown is in most respects a normal time-based cooldown. However, if you use Ice abilities… 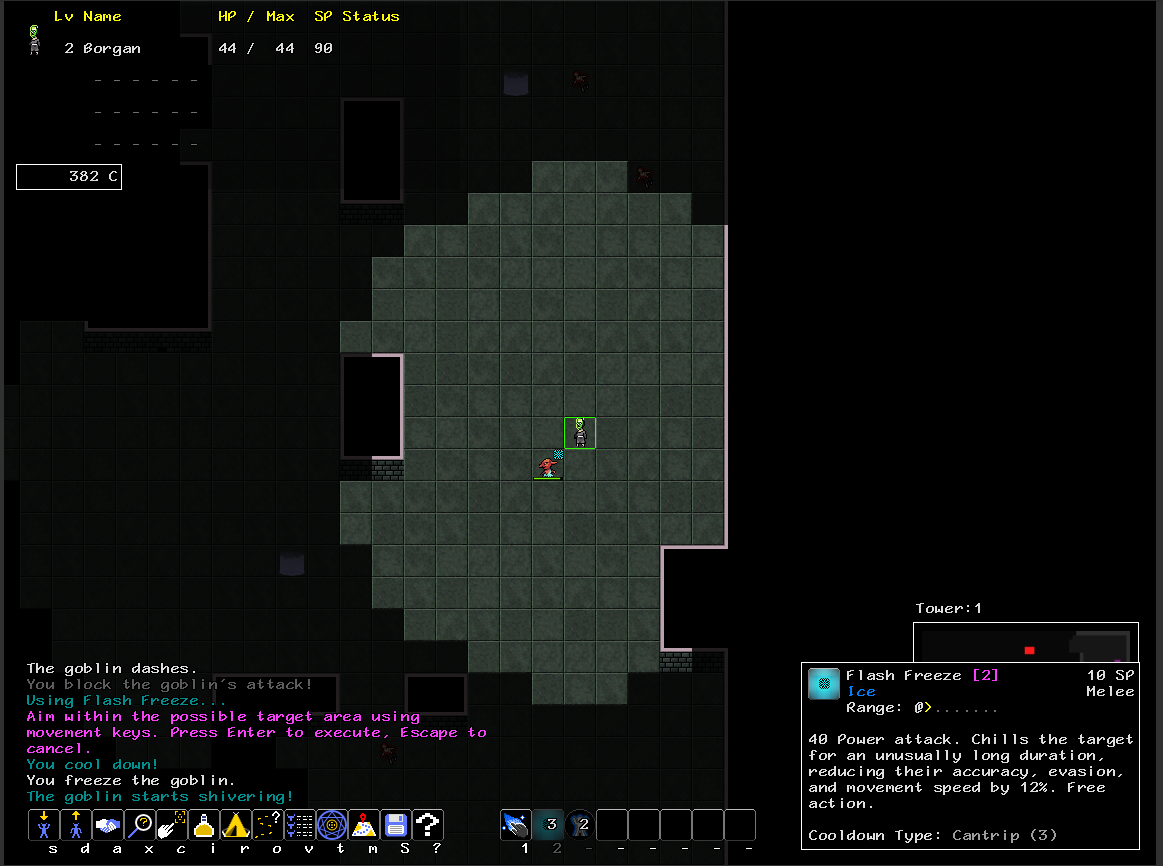 …the cooldown decreases by 1, immediately! This works even with free actions like Flash Freeze here. Which means, if you have a free action Ice ability and a normal Ice ability to use, like Chilling Touch there in slot 1… 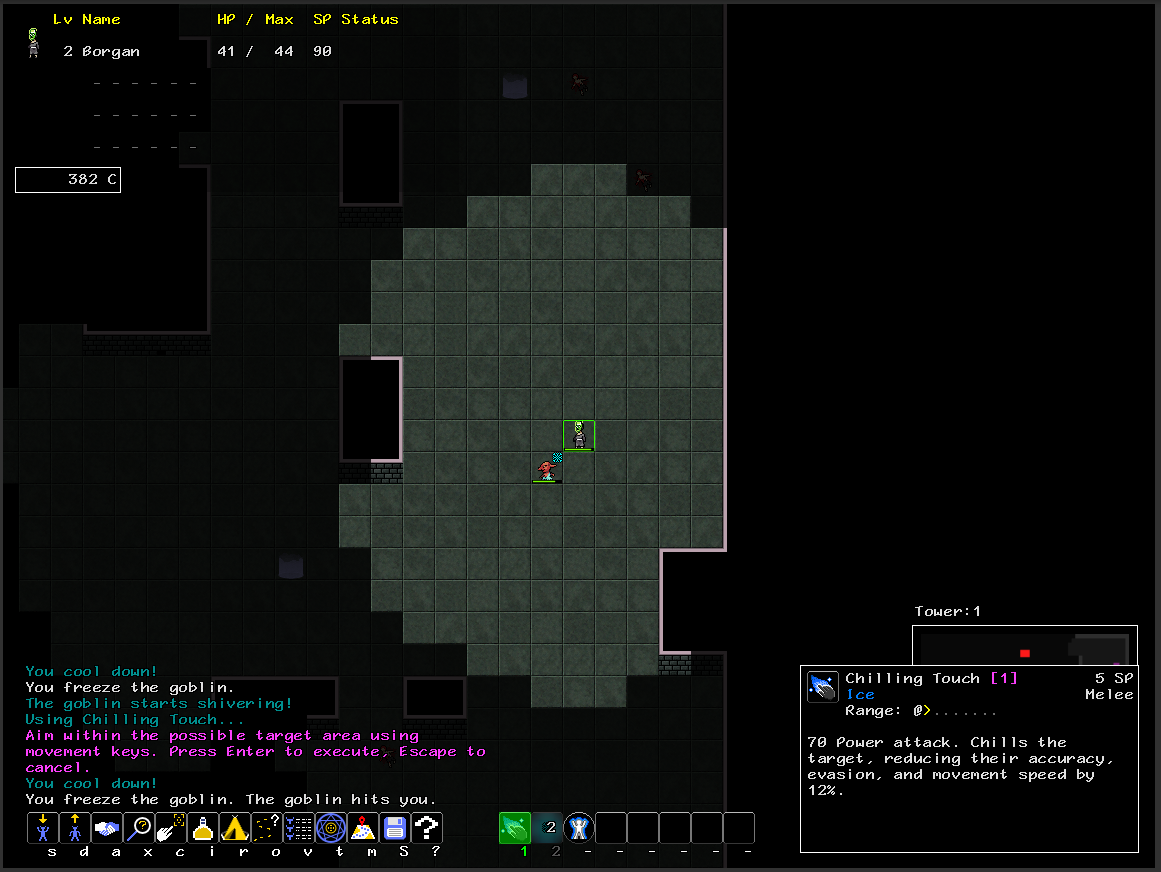 …you can use 2 Ice abilities in one round, rapidly bringing your Cold-cooldown ability back into play.

You won’t have to get far into the game to incorporate Glacial Shell into builds: one of the new lower Tower demons, the Alma, possess knowledge of it.

I’ll try to post a few more of these before release to preview more of the new abilities you’ll be seeing in game soon. Cheers!

130 of the new abilities are implemented.

Between the amount of stuff going in with this build and starting the new job at the top of the month, this has been a bit longer of a cycle than I originally planned, but we’re definitely getting closer to release. Main things left after I finish the ability implementation: spawn tables, the Tier 3 random modifiers, the new hybrid-themed random modifiers, bug fixes, and finally, testing.

Still a little bit to go, but it’s coming, I promise.

Stay tuned, and good luck in the Tower!

I’ve finished implementing 50 of the new abilities so far.

Considering I’m working these days and it isn’t even the weekend yet, this is pretty good progress.

Speaking of abilities… here’s the icons for every ability that will be in the game as of the next build. Crazy 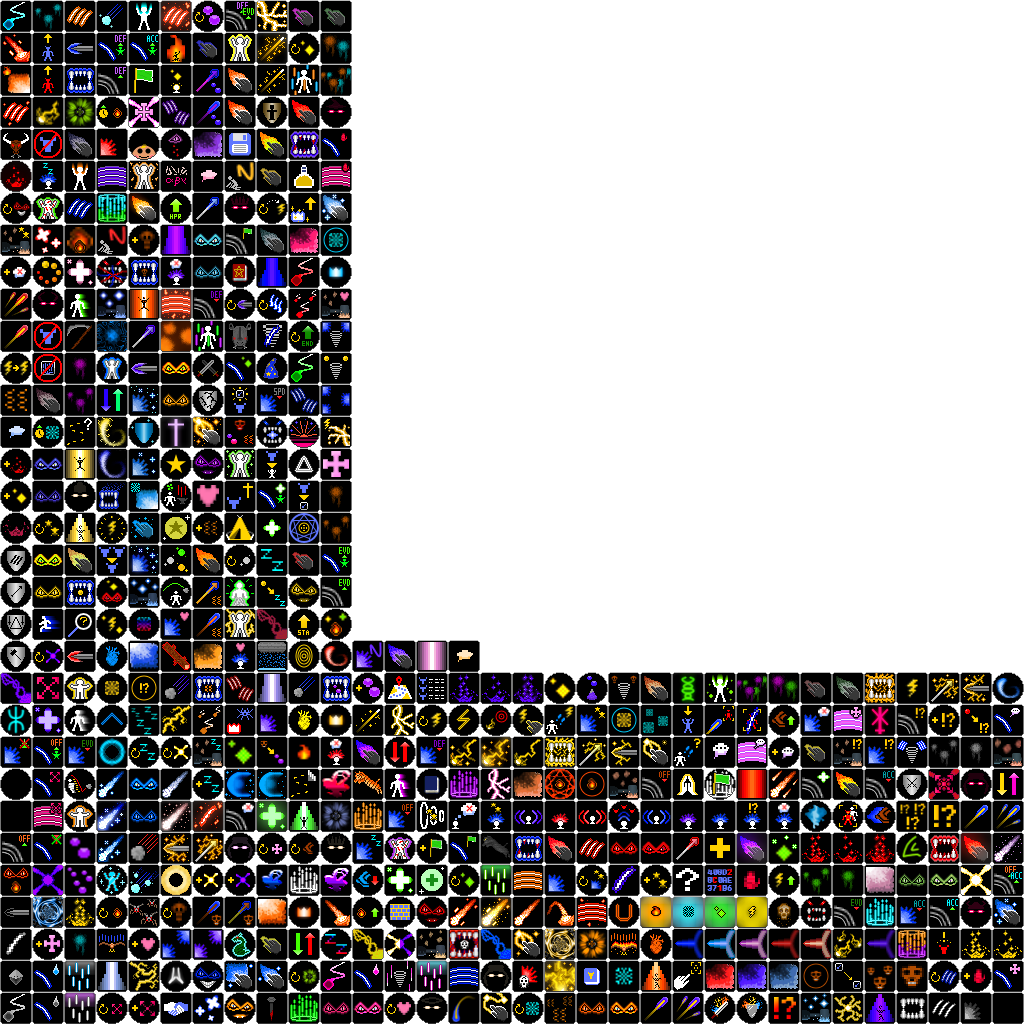 Now I just have to implement them… whew. 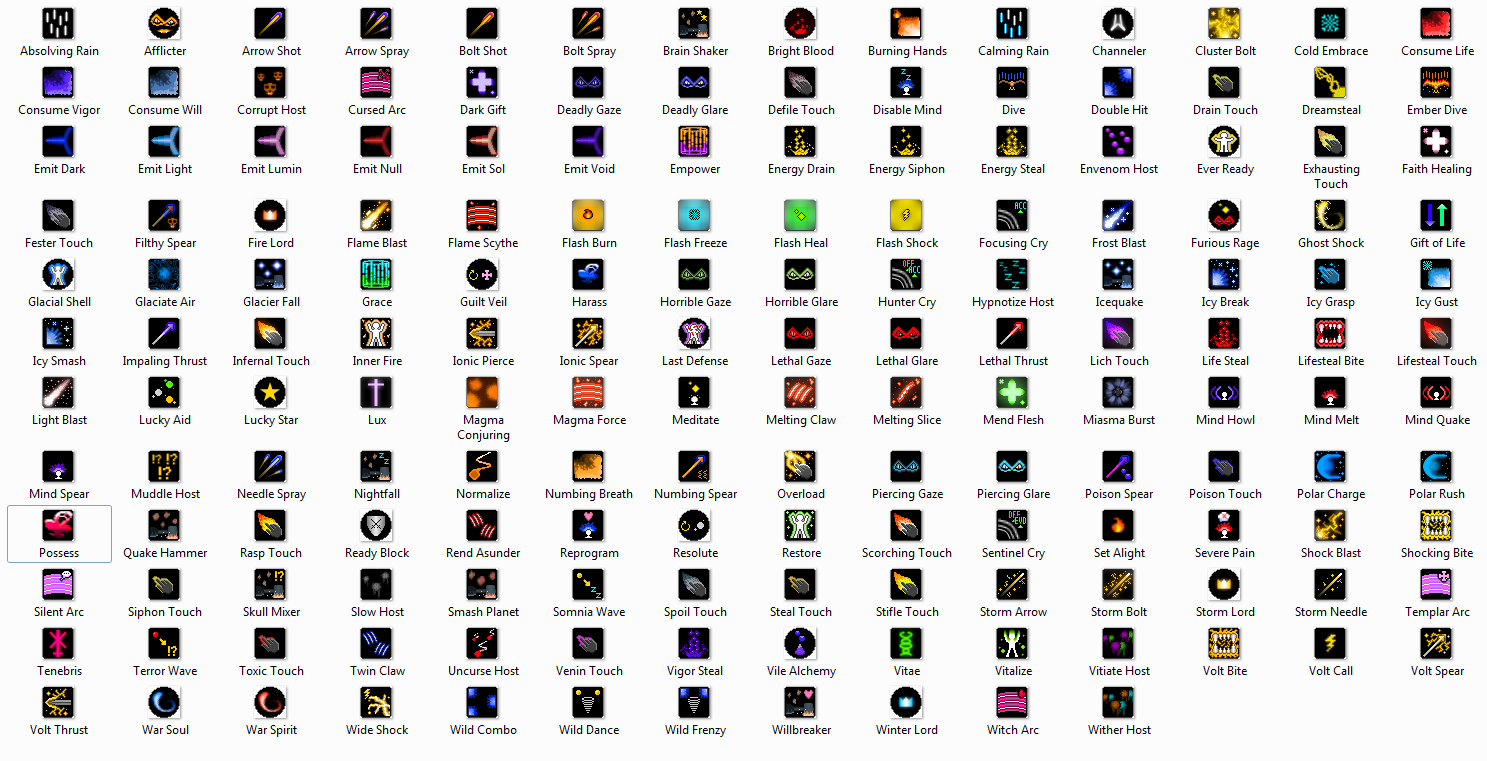 Then I just … have… to… implement them. Though oddly, that will probably go faster, because I’m pretty slow at art.

Geminimax is still hard at work on his versions of Demon’s character sprites.

As usual, they’re quite awesome! For a small preview, here’s the versions he’s done for the new demons in the lower floors of the Tower:

I’ll post another preview a bit later with his versions of the sprites for the new floors’ demons.

LuckyLuckLuc has put together an awesome introductory video for Demon and posted it on YouTube.

If you’ve found getting started with Demon to be a little daunting, this should be a big help so check it out.

LuckyLuckLuc streams Demon and other roguelikes on his Twitch channel, which you can find here: https://www.twitch.tv/luckyluckluc2

So… many… ability icons…. but, I’m knocking them out at a steady clip!