Quick update: Work’s going to be picking up again probably starting next Monday, but I think I have a decent chance of being able to polish up and release the save file / save lot improvements and some bug fixes as a new build sometime this weekend before going semi-dark again for a couple of weeks.

A little glimpse at the other thing I decided to work on while I was in the neighborhood… Still a bit rough, but progress is progress (especially on hated and loathed UI tasks 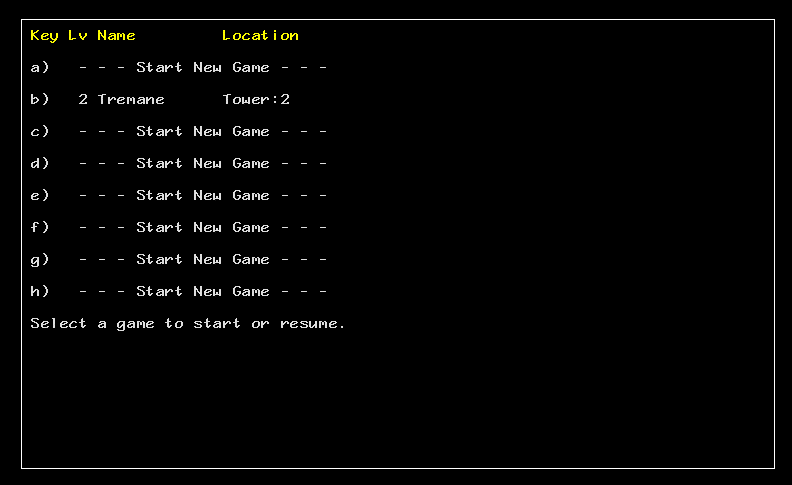 Decent chance the next build (which will likely be soon!) will *not* be save compatible with previous versions, since I’m re-jiggering the save file code to be more fail tolerant (hopefully

) and allow multiple save games at the same time. I’ll try to preserve it if I can, but it is probably not likely. Thanks for your understanding.

Break time is just about over me: I’ll be back to Demon development starting tomorrow evening.

Granted, work is still busy (and about to get busier), but as previously discussed, I plan to break builds up into much smaller releasable chunks going forward so that we hopefully avoid anymore 9 month build cycles.

The next build will be an attempt to fix save data loss if your computer loses power while playing, which was requested by a long time player. Pretty sure I can do something to at least improve this, so this should be fairly quick. Will also include some other bug fixes too.

The build following that will probably be me a tiny build involving making some new abilities and sprinkling them about because doing two heavy tech/non gameplay builds in a row will make me sad.

The build after *that* might be an attempt to improve full screen mode’s visuals… if I can actually figure out a way to do that. I will at least make an attempt, but no promises on success, so if it doesn’t work out, no build.

After *that*? The next one will be the first in the Demon Relic Preservation, Character Creation, and Relic Upgrades revamp. Not sure exactly what order those will happen in, but it will be broken up into as small a set of chunks as possible. (Best guess is that DRP will be one build, followed by probably CC + RU together since they’re kinda linked.)

So, that’s the immediate future for Demon.

Thanks for indulging me in my small break, I’m excited to get back to making Demon even better.

All moved in at the new house now, so I’ll be back to responding to forum posts and what not normally. ETA for active development resuming is still early/mid June: the remaining time between now and then is a short break to catch up on some gaming.