1) There will be a new version when I get back in front of a computer I can make builds on. This will probably be Thursday, 6/30.

2) The scoring version will be changed again.

The build seems to be playable, the bug is not fatal or anything, just abusable and thus reason to reset scores again immediately. My apologies to everyone for the trouble: this has been an unusual set of circumstances.

This is going to be a short for a build post, and also a bit of a weird build post, bear with me.

* The 6/25 builds have been added to the usual download links. However, the 5/3 builds have been left up as well. The dates are clearly marked in the file names, it should be easy to grab the right ones. (This is a bit of a change from my original plan of making a separate download link that I discussed in the forums, sorry for the confusion.)

* This is because I have unexpectedly been called out of town for a few days, and will not be here to address any bugs, even very very bad ones, that may be present in the 6/25 build. If you run into problems, you can always re-download 5/3 and play that until I return and can fix such bugs.

* I need to leave for the airport very soon, so unfortunately I can’t really say much else here. That’s okay: when I return, and when I fix any bugs that have come up, I will do a more “formal” release of the build, including my usual posts on RogueBasin, Twitter, etc, and a more in-depth discussion of what’s new in the build here. However, I *did* update the changelog included with the builds, so you can read all about there right now if you like.

* This is a pretty significant balance change for Demon, similar in scope to the addition of currency a few months back. Like with currency, I expect that despite my best efforts, some things will end up out of whack and need adjustment. This means two things: 1) Don’t get attached to the current versions of anything yet, 2) Don’t assume anything is “intended” to be the way it is, especially if it seems crazy over or underpowered.

Apologies again for the odd circumstances surrounding this release. It was either this weirdness or put off releasing until I got back late next week. I decided to take a bit of a risk and go ahead and release oddly so you folks can try out the Relic Upgrades a bit sooner.

Thank you for understanding, and good luck in the tower!

Going to keep this short so I can get back to testing, just posting to let everyone know it is really close now. 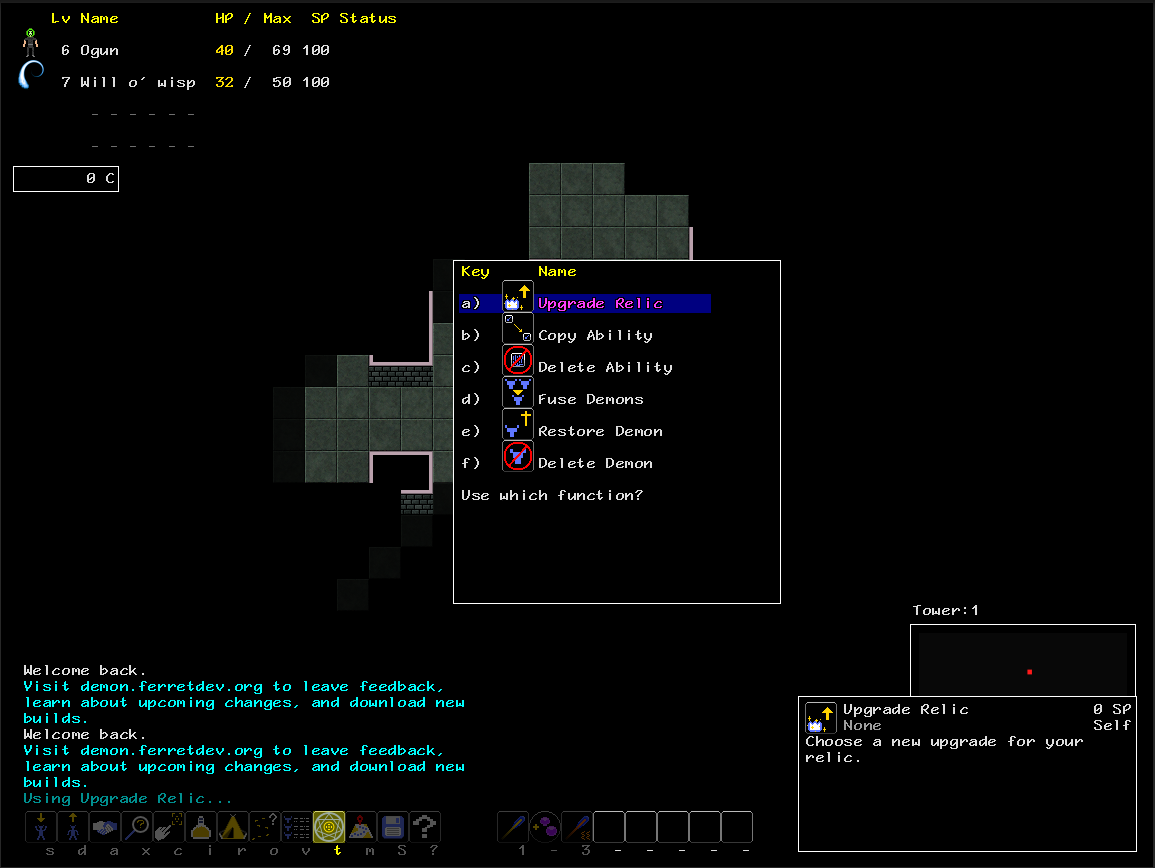 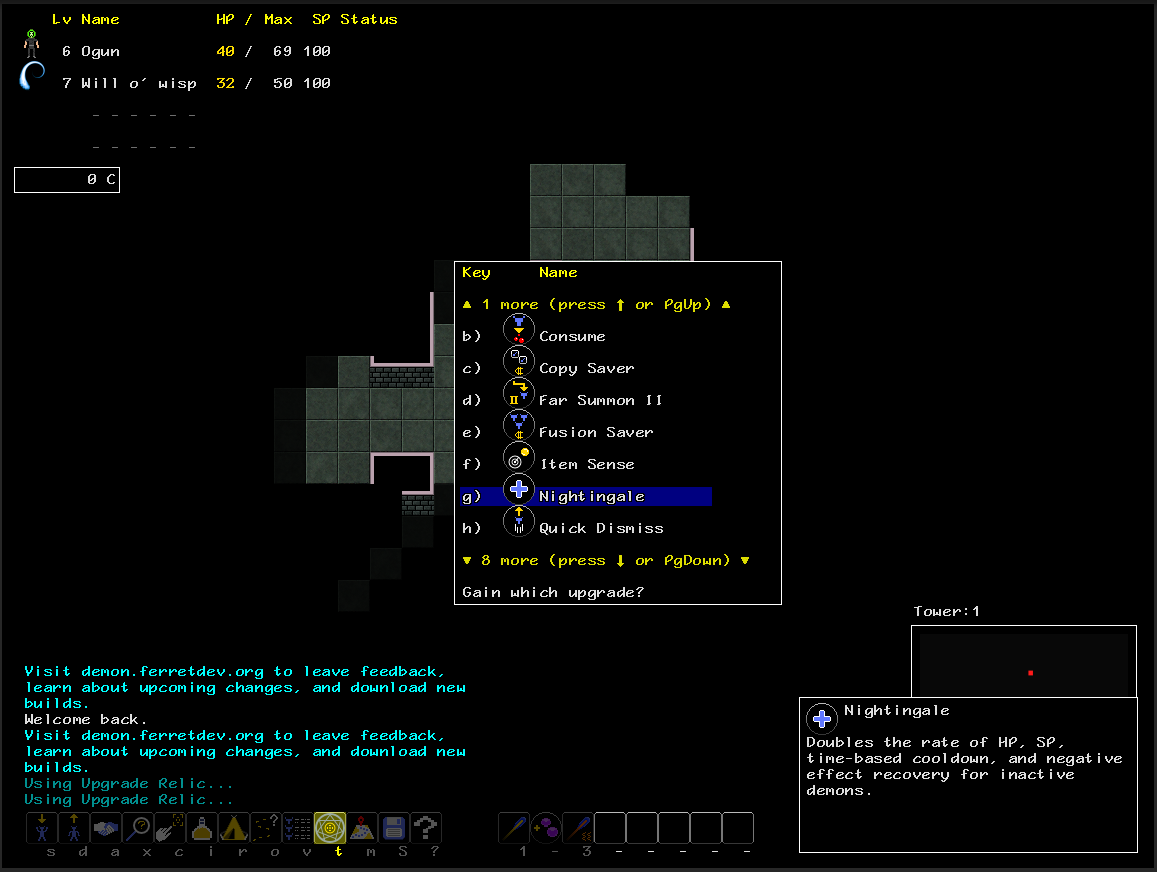 One of Demon’s rules is that (with very, very few exceptions), anything the player gets access to, so must the AI, and vice versa.

Soul Armor, one of the new Relic Upgrades, allows a summoner to sacrifice a demon to copy the demon’s resistances, HP, and Speed modifiers to themselves. So, naturally, I taught the AI how to pick good Soul Armor targets.

Then, I needed to test it… which involved giving an enemy summoner Soul Armor and then spawning… lots of them (since the result is somewhat subject to RNG, after all, just like the player, an enemy summoner has to pick from what they found, not necessarily what they hoped to find! 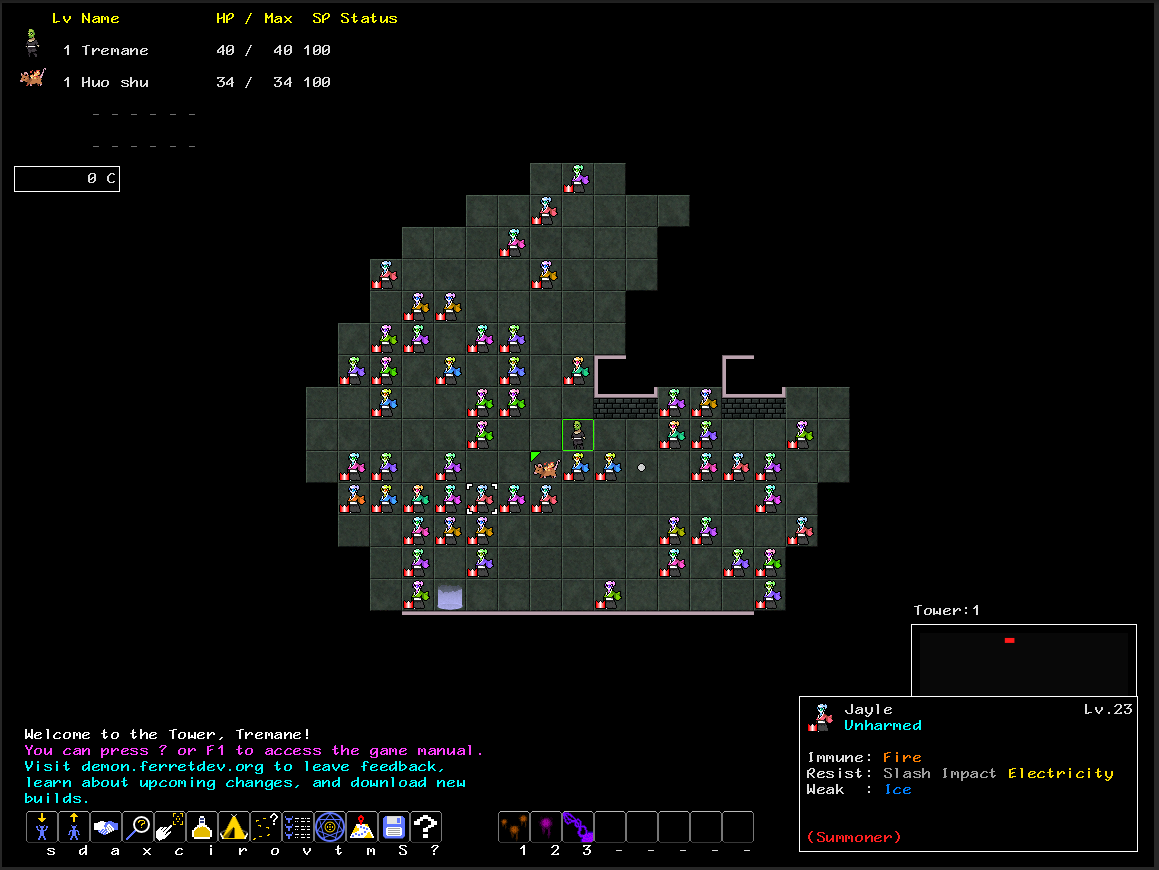 Though it has single-handedly made Enemy Sense one of the most expensive abilities to implement, I couldn’t stop myself once I thought of this.

As previously discussed, Enemy Sense both reveals enemy locations on your map *and* causes an extra encounter to spawn when you finish exploring a level. Neat enough as it stands, but I had the idea of giving these extra encounters a small chance to be special encounters with demons otherwise not “real” enough to appear in the Tower normally.

The usual rule for a myth to be included in Demon is fairly simple: it needs to have lore going back at least a century or so, and I must be able to find multiple sources (this to avoid getting tricked by various nonsense like made up myths… well ,more made up than normal anyway

) For the Enemy Sense specials… we’ll call the cryptids… I’ve loosened that a bit.

So, how many of our new cryptid friends do you recognize? (I’ll give you the spooky kid one: His name is Charlie.

Despite the best efforts of allergies, insomnia, and some intrusion from Real Life(tm), the Relic Upgrade build is drawing closer.

On that note, since this build’s changes definitely have a major impact on balance, the scoring model version number will be updated. If you’re new to how the scoreboard in Demon works, this basically means the next build will have a fresh, new scoreboard.