The happy return of the starting ally selection screen. 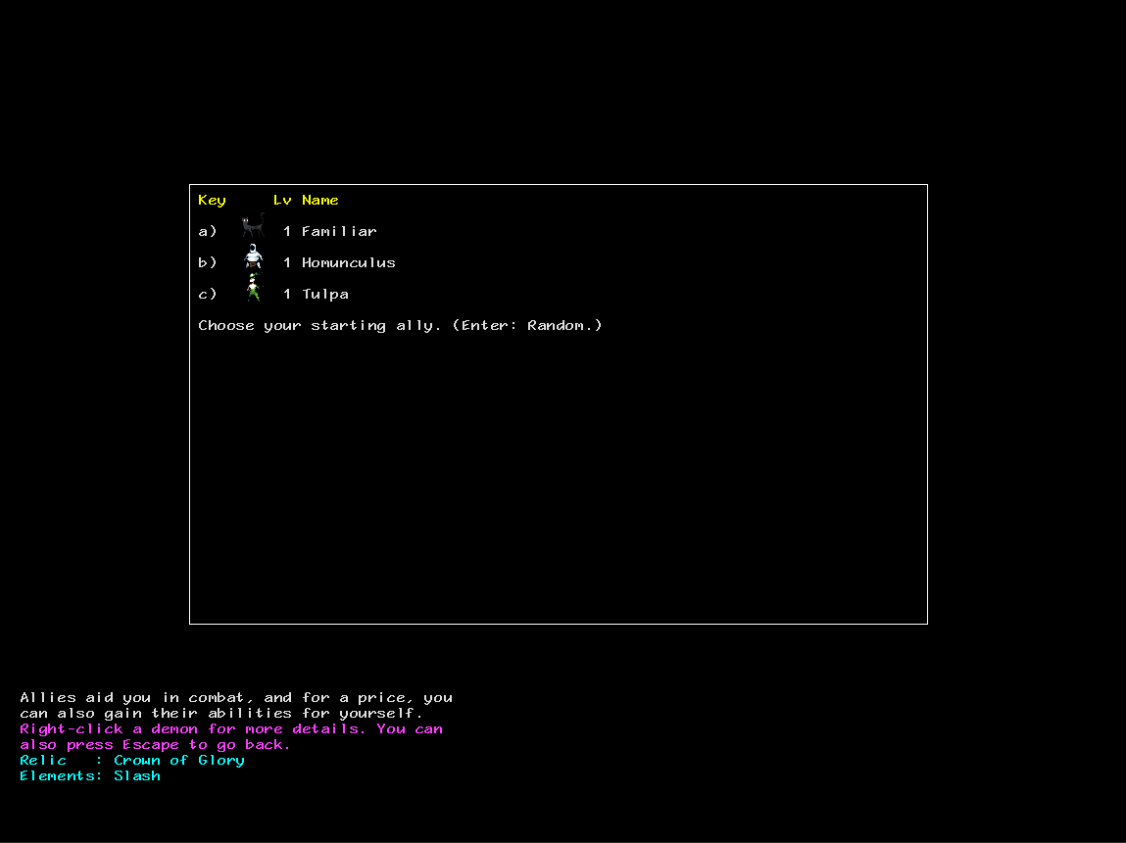 And now, a quick peek at the two new starting ally choices: the Familiar and the Tulpa.

(IMPORTANT: Abilities, stats, and resistances not necessarily final… though, as starter allies, their abilities will follow the format of “main ability”, Draw Wounds, Refresh, and “support ability”, and none of the main/support abilities are supposed to be all that exciting 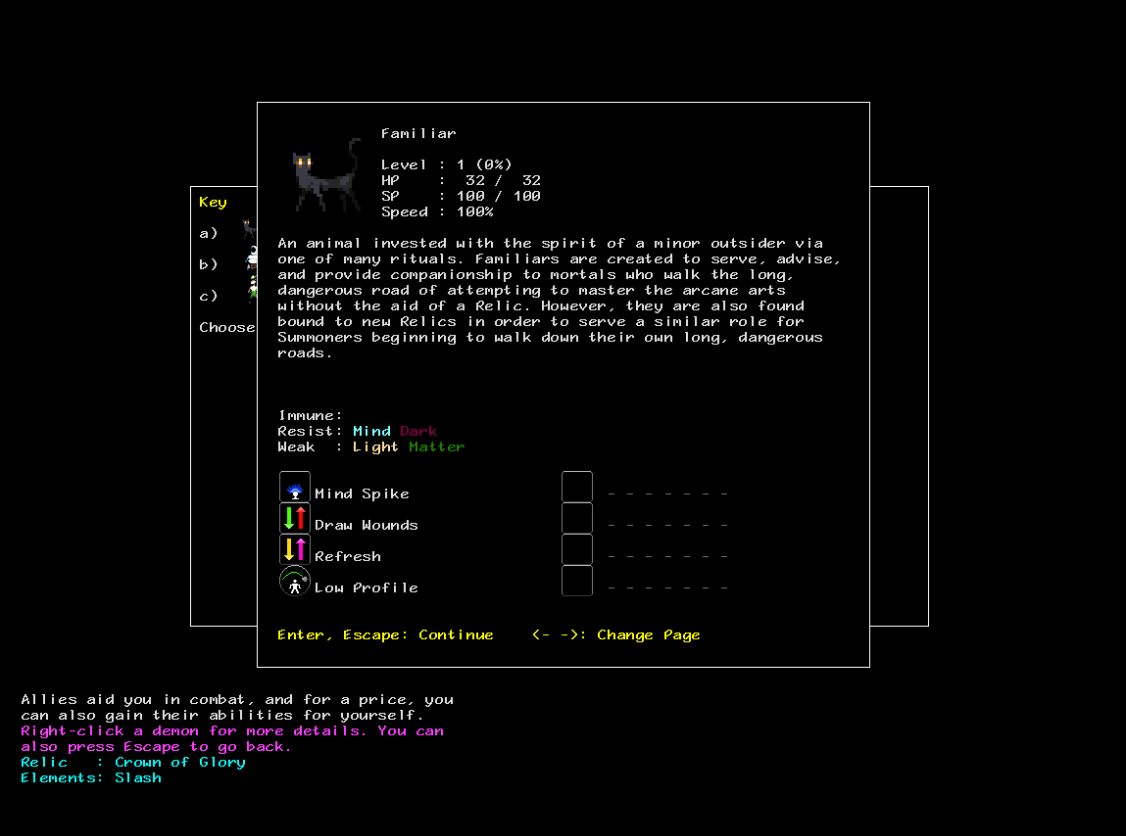 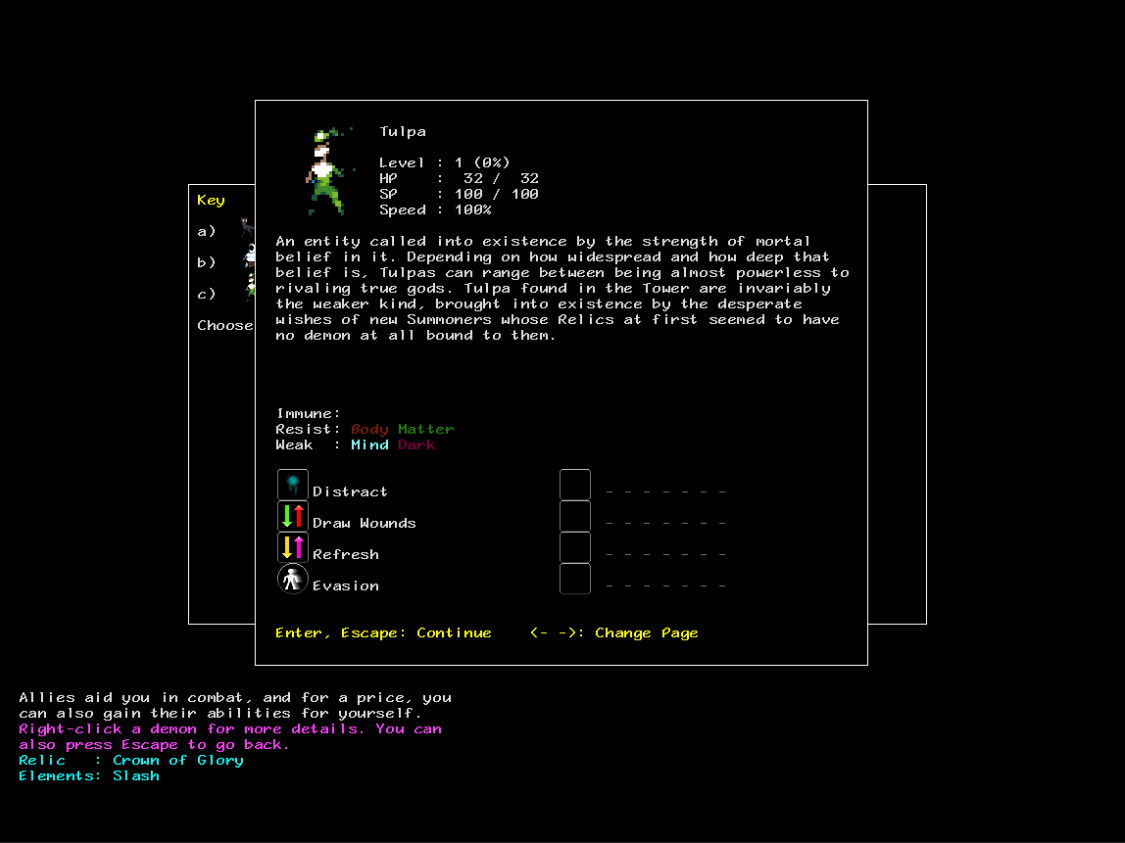 The new Relic being added in the next build is the Horns of the Hunt: 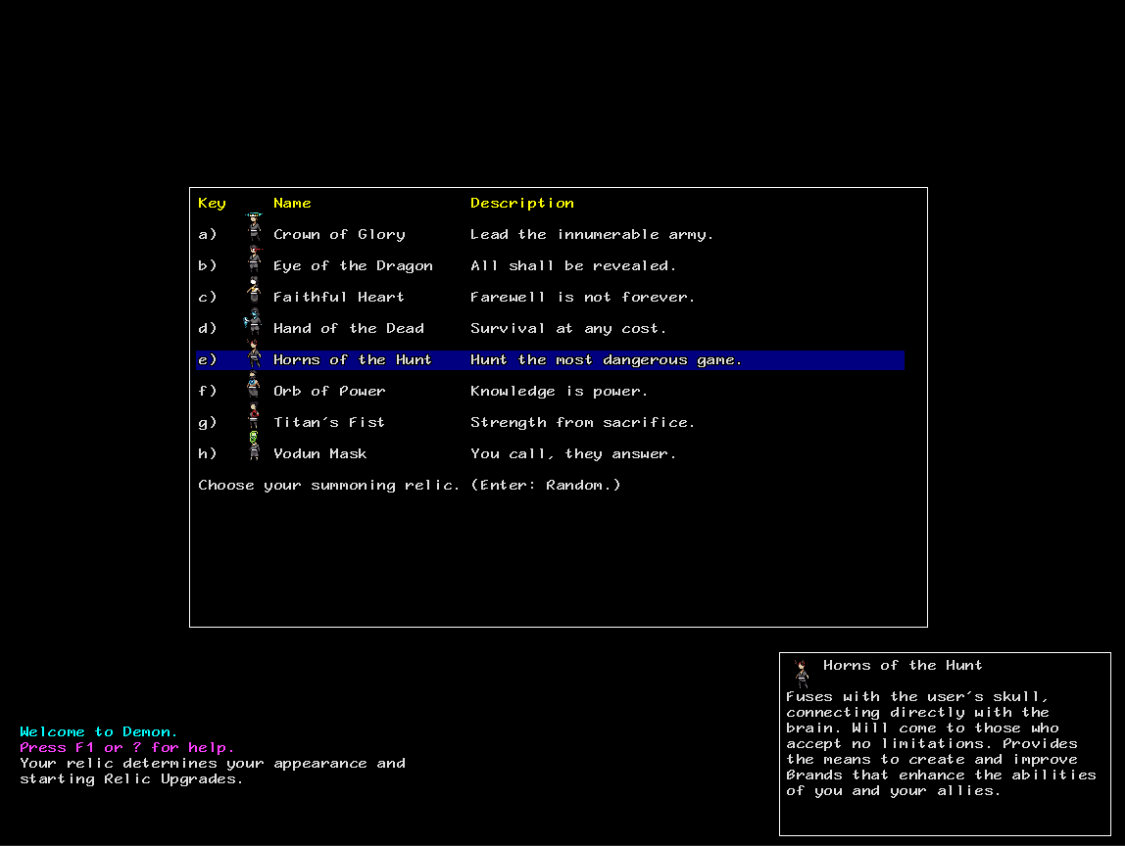 As you can see from the tooltip, the Horns of the Hunt’s starting upgrades will revolve around Brands, giving you a starting option that has some pre-investment in this new mechanic.

Exactly which upgrades it starts with will depend on what costs get assigned to Upgrades during the balance pass on them I’ll be doing as part of converting Upgrades to a point buy system: every Relic will start with the same number of points. Most of these will be pre-invested in the starting Upgrades for that Relic, but any leftovers will be placed in the unspent pool. It’s possible that for some Relics these leftovers may be enough to immediately buy a cheap Upgrade as soon as the game begins, if you like.

By the by, if you’re wondering what the Relic Wraith for a Horns Summoner looks like, that you’ll have to see in game.

Alright, time to get back to it.

The next build’s main features are slated to be:

* Switching over to a point-based Relic Upgrade system. (i.e.: Rather than getting a Relic Upgrade every several levels, you will get an Upgrade Point each level, and Upgrades will cost varying amounts depending on their strength/usefulness. The “average” Upgrade will cost 10, but an individual Upgrade can cost however many makes sense for what it does.)

* The (sort of) return of starting demon selection: Starting next build, you will again be able to pick a starting demon at character creation, from among three demons that are only available at that time (or via Relic Wraith hunting…) The Homunculus will be joined by two other new starter demons, which I’ll post abut later.

* An 8th Relic will also be added to character creation, to accommodate more starting sets of Relic Upgrades.

This is obviously not going to be anywhere near as big a build as Brands was, so it will probably not take me over high a year to do.

For a bit at least, I will be striving to do more bite-sized builds like these, rather than those that add sweeping changes like the Brand system. That’s not all bad news though, because next on the list after this build is adding more Tower floors.

Finally, to celebrate the resumption of development after my break, here’s another piece of fan art Zyalin made a little while back that we were saving for a special occasion. 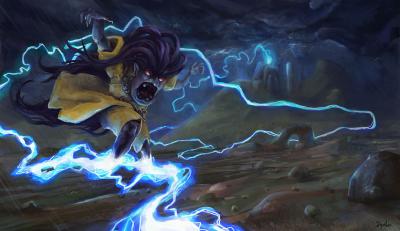