11/26 build is released to fix a UI bug with the new smaller resolution regarding tooltips that were “locked” covering up important message log prompts. If this has been happening to you, the 11/26 build should fix it. Thanks to Sandman for the quick bug report.

New build is posted! Grab your preferred flavor from the links on the right.

My previous post covered the main changes, so I don’t have a whole lot else to add.

If you want more details, you can always check out the change log included with the builds.

Here’s a screenshot showing that the new build is still the same happy game everyone has grown to love. 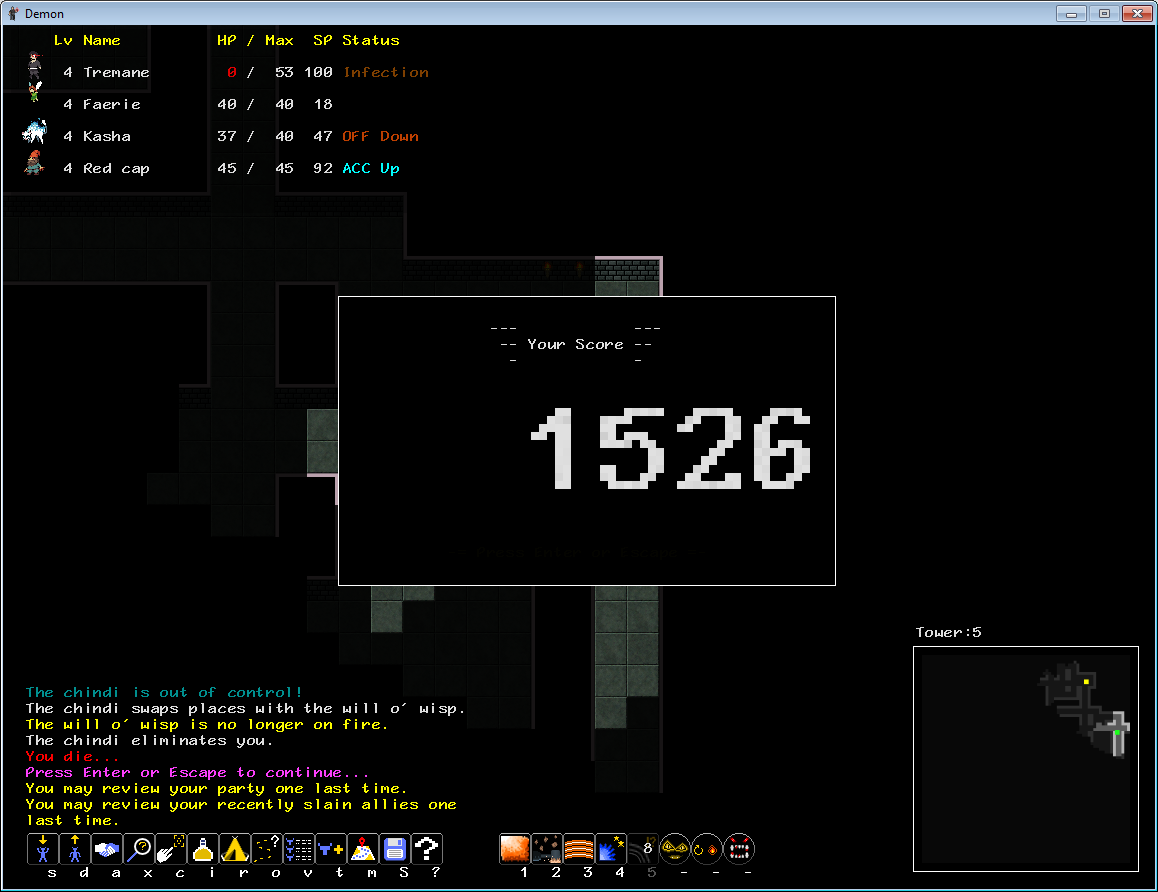 Enjoy, good luck, and happy Thanksgiving to everyone in the US!

The next build is nearing completion.

I hope to have it ready sometime tomorrow or Wednesday.

Here’s a quick reminder of the major new stuff coming:

Been a week since my last post, so I figured I’d give a small update.

The second half of the capture mechanic polish pass is going pretty well.

“Defeat X in Y turns” mechanics now support travel between floors and also reveal the location of the nearest enemy on the map for the duration of the attempt. This should make these capture attempts much better and more fair gameplay-wise. You’ll be able to see the marker on both the mini map that is always visible, and on the main map. 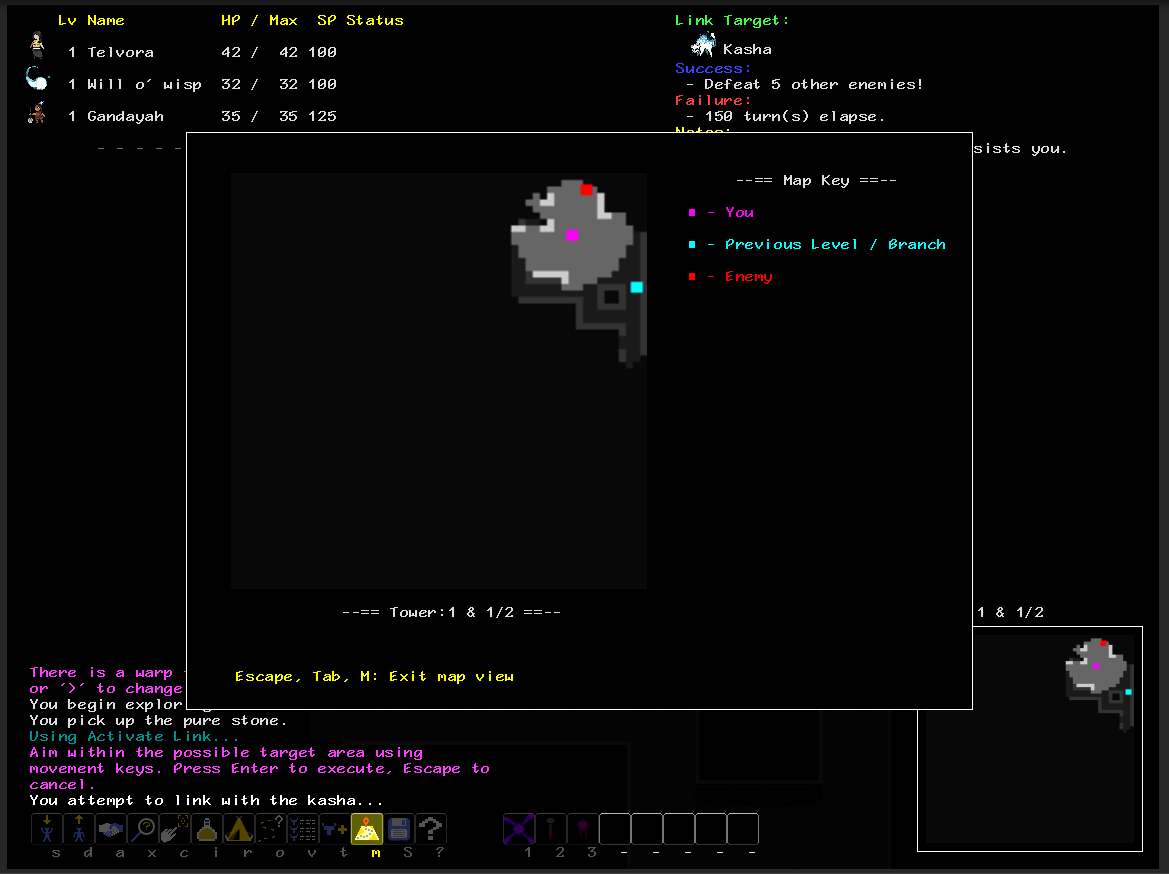 Protect captureables now have the ability to spawn enemies to attack the target, finally bringing this particular mechanic to the level it was supposed to be at.

Here we can see an Asrai being mobbed by angry peasants.

(Note: The spawned enemies aren’t worth XP for balance reasons, but you do get XP for successful captures.. and of course the demon itself is also a reward.) 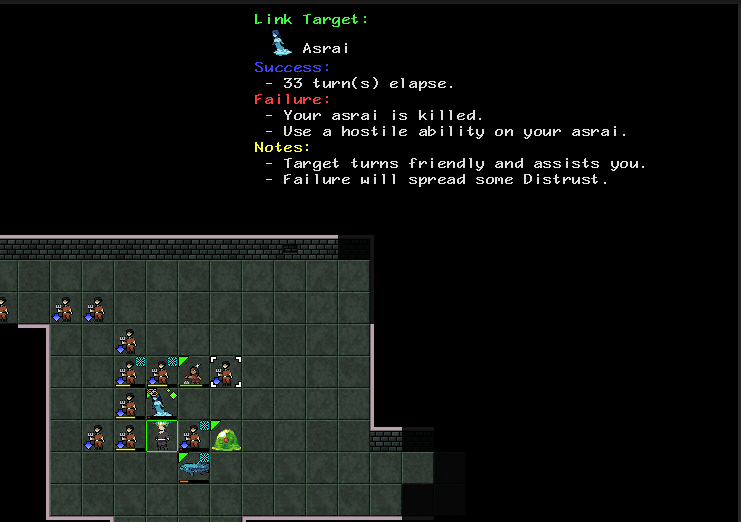 Also looking at a little more polish to encounter management: there’s still a teeny bit of double encountering going on of the ‘both at once’ kind I don’t approve of, going to see if I can tweak that out of existence.

Finally, going to see if I can figure out a way to squeeze the UI into a smaller size resolution so people can play on smaller monitors. No promises on this one, but I’m going to at least look.

Another build so quick? Yep.

It’s even a fairly significant one! The build links on your right have been updated, grab your favorite flavor and go.

The major changes in this build are the introduction of a rudimentary set of encounter control features designed to prevent double encounters and (now that it is no longer necessary as an artifical/hacky means of preventing double encounters) and a very significant reduction in the size of dungeon floors.

It is my expectation that double encounters are virtually (not completely, but almost!) eliminated based on my own testing, which considering that is true on top of the dungeon floors containing roughly only 25% of the playable area they did before, is a pretty good result for a first pass.

You can see the difference in level size from this pair of Tower maps below. On the left you have one of the new levels, on the right, one of the previous ones. It’s worth noting that I have not made an attempt to upgrade level generation yet: this was just a size reduction.

Level generation improvements will come once I’m back onto content development. 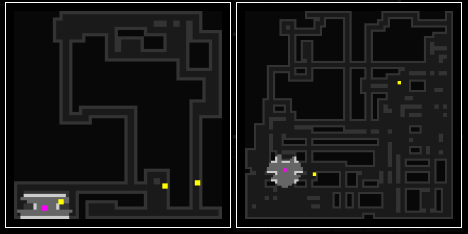 Next up, the remaining capture mechanics polishing, then… the wide, wide world of content development!

One of Demon’s more annoying design bugs for awhile now has been the lack of control I had given myself over how enemy encounters behave in in the game. The most obvious example of this is when you run into to ridiculously large groups of enemies (actually two or more groups that happened to randomly find each other and stick together), but it also manifested in other problems: the extra large… and largely empty… levels I asked the game to create to try and minimize that problem, and the resulting easiness of “chase me” captureables and near impossibility without a Trouble Chime of “kill X other guys” captureables that this not fix caused.

I’ve been quietly working on a real fix to the original problem, and, I think it is almost ready to deploy.

The main, immediately visible results should be:
* Much, much smaller tower levels. (If current testing continues to bear out my current parameter choices, tower levels would contain about 75% less playable space and occupy a 60% smaller grid.
* Virtually no more initially double encounters…
* …but there will be more frequent mid-encounter intrusions, particularly during longer battles.
* Enemies are somewhat much less willing to expend resources aiding other enemy groups. This will be most noticeable with healers and buffers: they will rarely use their limited resources on enemies on other groups, preferring to save their efforts for their actual friends.

The main result of these change I’m hoping for, as a whole? A much leaner exploration experience, encounters that are overall fairer while still challenging (you will almost never run into two groups at once anymore, but extra groups joining a long fight in progress will be more common), more challenging “chase me” and (to a lesser extent) “wait” captureables, and fairer “kill X in Y turns” captureables.

Early testing has been going well, if that continues to be the case, this next build might be released very soon indeed. I’ll keep you posted.

(Note: I should stress that this, however, is not the remaining part of the captureable review that is still in progress. Further changes are coming on that front, including direct fixes to some of the issues with “kill X in Y turns” captureables.

Thanks go out  to Rogueliker, whose stream of Demon I spotted this during last night.

At long last, the build with Geminimax’s new character sprites and improved negotiation mechanics is released.

Go grab your favorite flavors from the download links on the right-hand side of the page.

I hope everyone is as excited about this build, particularly the new character sprites, as I am.

I’ve been playing and testing with them for a few weeks now, and I couldn’t be happier with how they’ve turned out.

If you haven’t seen them yet, here’s a few screenshots… but what are you waiting for? Go play! Also, if you want to check out more of Geminimax’s excellent artwork, visit his DeviantArt page at http://geminimax.deviantart.com/

Enjoy, and as always, good luck in the Tower! 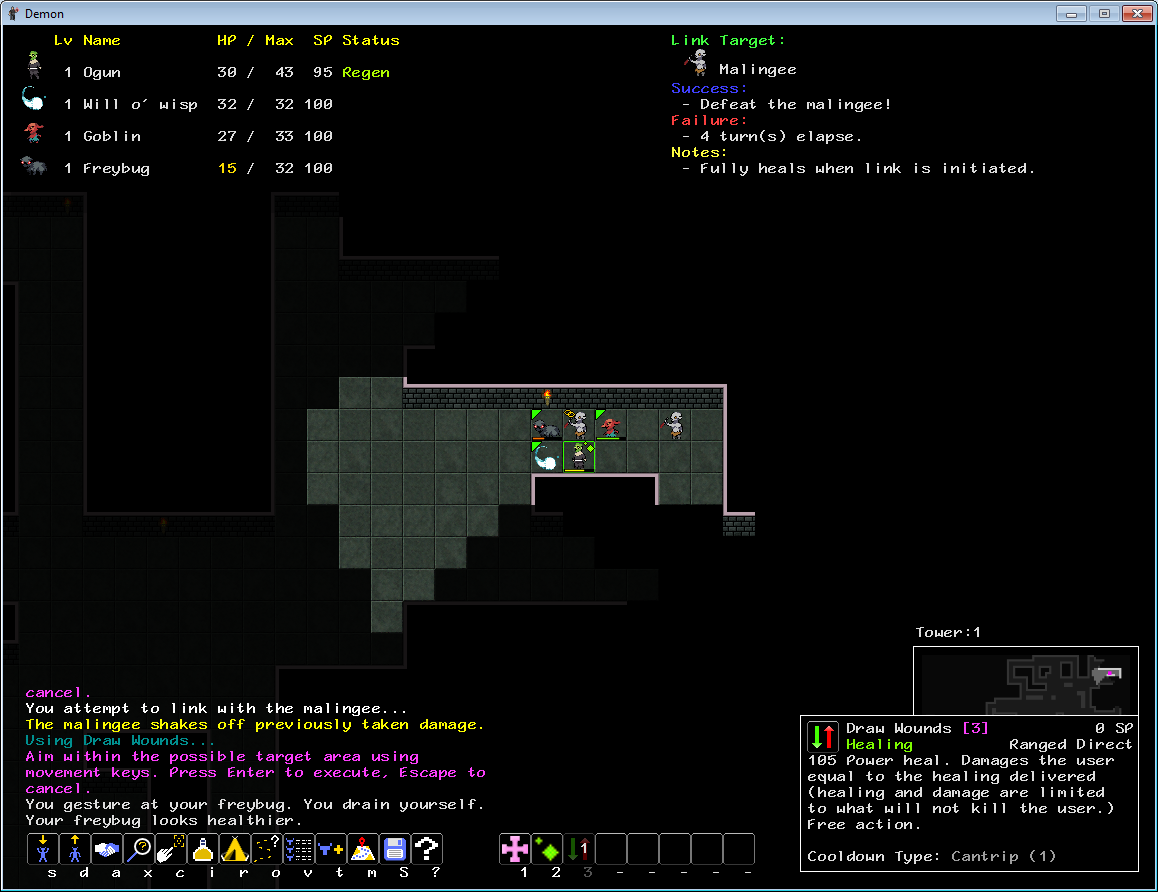 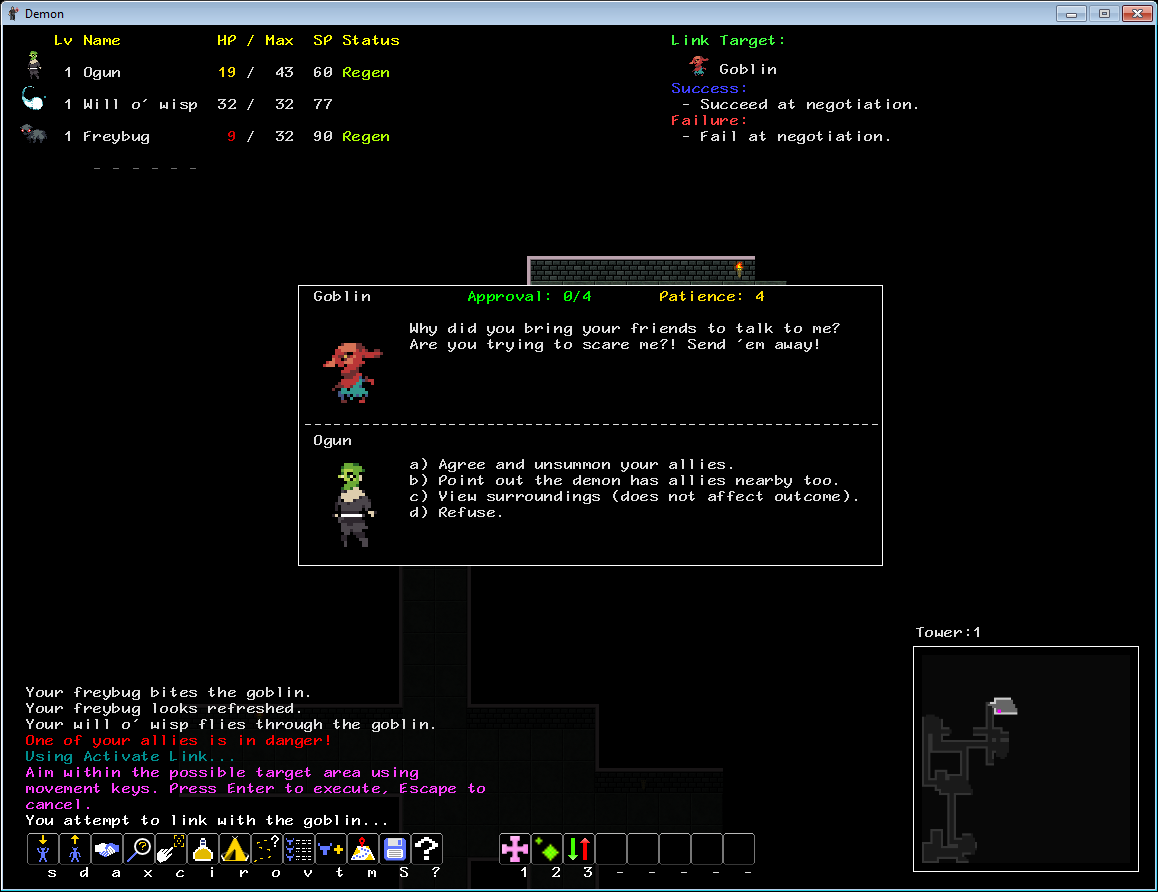 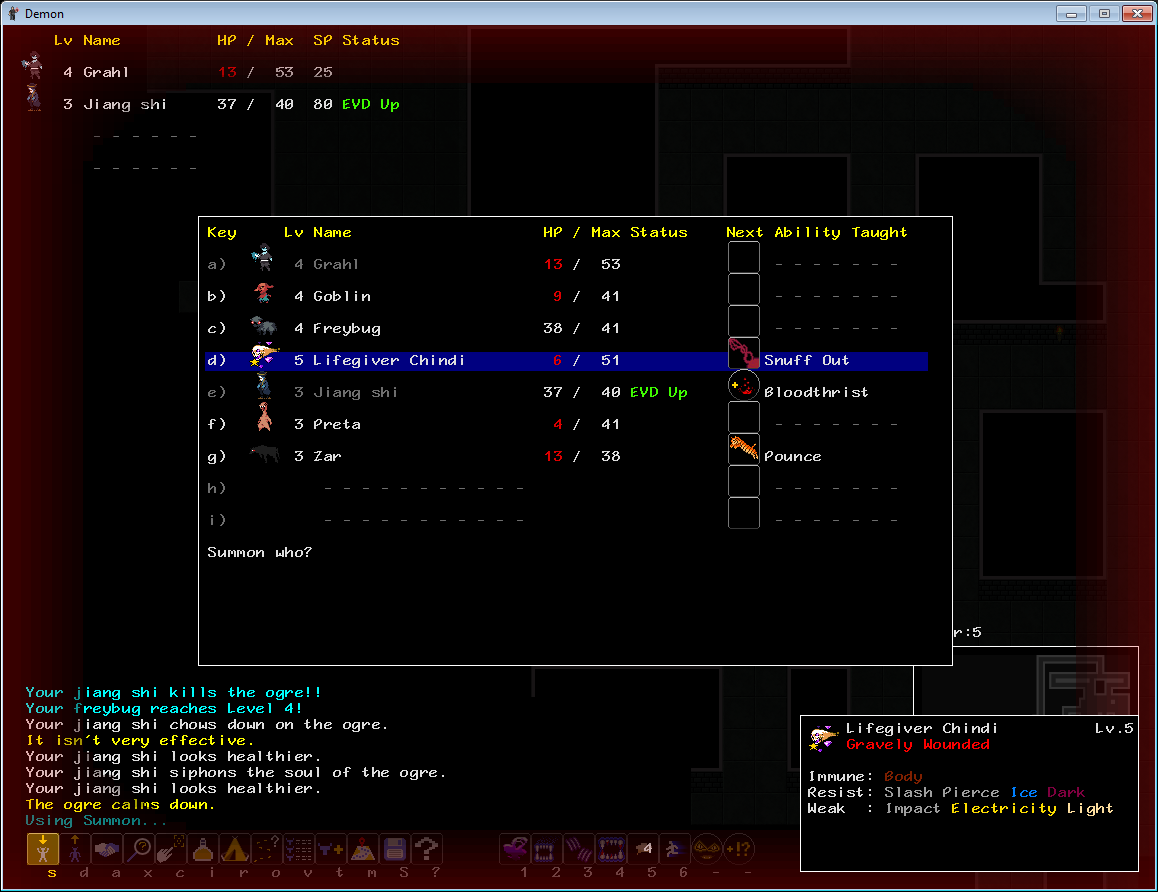 Tomorrow morning I begin the final testing on the next release build.

I’m hoping for a Tuesday or Wednesday release.

Assuming no ugly bugs pop up, it won’t be long now. I can’t wait to get the new Geminimax character sprites and negotiation goodies out there.