Here are options I’ve implemented as part of the upcoming build.

They’re designed to let you streamline the experience in various ways, such as by limiting when the message log will require input to continue, controlling how/when Vfx play, and a couple of other odds and ends. 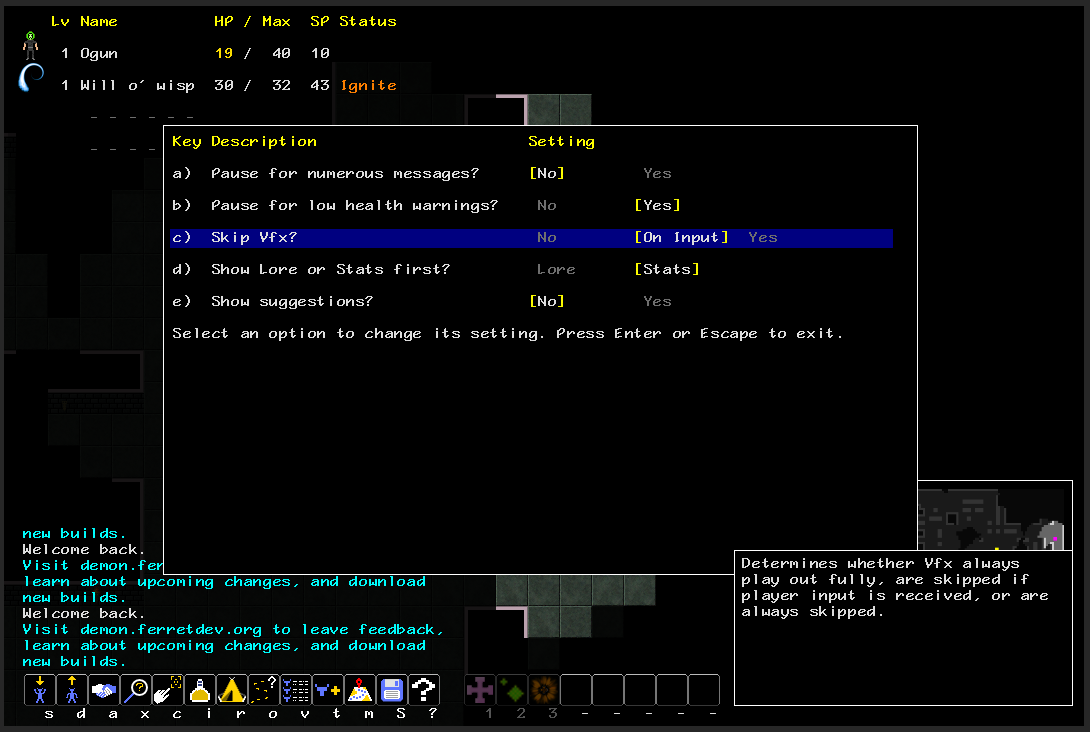 So, what’s coming up in the next build?

Much of this one comes from feedback I’ve received from the forums, so if you’re a frequent visitor there this won’t be a very surprising list, but for those who don’t keep up with the posts there, here’s a rundown. This isn’t an exhaustive list, there are some other things I’m going to take a swing at, but here’s what will be in for sure:

* Increased control over the message log through a new options menu, including the ability to disable various pauses such as for too many messages or low HP warnings.
* A revamped stair system for the Tower to discourage stair-dancing.
* Other UI improvements such as showing tooltips for modifiers when using Matrix items, tweak the indicators for party members vs. the player himself, syncing up keybinds for the various party member lists (so that ‘b’ refers to the same monster whether or not it is a list the player is normally included in, etc.)
* Any bugs that have come up or come up.

In brief, it’s a UI/usability patch mostly, but that’s what the feedback indicates is needed.

I plan to return to the original schedule after this, which would have capture mechanics upgrading next on the list.

It looks like I had accidentally left a save game file I was using for build testing in the PC version of the 9/21 build. Not a big deal, but it was probably a bit confusing to folks. I’ve removed it now. Sorry about that!

The Annual Roguelike Release Party 2015 build of Demon is out! Go get it at the links on the right, or from right here if you prefer: https://drive.google.com/folderview?id=0B-sx_4eW-B5hWnhNZlRPclZLeUU&usp=drive_web

The list of changes in this build is fairly extensive, but here are the highlights:

I hope everyone enjoys the new build, especially anyone who was struggling to get melee off the ground before. It was certainly doable before (2 of 4 wins post-relics have been melee), but now it should be much more in line with magic and support in terms of fun, effectiveness and entertaining build options to consider.

Good luck in the tower, and please, consider playing some of the other roguelikes released for ARRP as well! You can find a list of them here at the RogueBasin: http://www.roguebasin.com/index.php?title=2015_ARRP

Rogueliker will be streaming some gameplay from the lower levels of the Tower tonight around 7:45 PST on his YouTube stream, linked here: https://gaming.youtube.com/c/Rogueliker1/live

If you’re looking for some insight into how survive the first floors of the tower, this could be a great chance to pick up some good tactics and strategy. I’ll be there as well (crappy internet permitting!), so stop by and say hello!

Rogueliker has also mentioned he will likely do a Sunday stream to celebrate the release of Demon’s ARRP 2015 build, I’ll post again when I have specifics on that.

As part of trying to make sure melee has the tools to be as viable and interesting as magic and support throughout the tower, these are the new abilities that got created.

Many of these are available on relics, allowing you to start using them right away. Others will show up on demons, waiting to be learned. Still others will join the ranks of those rare but powerful abilities you can only find on modified demons.

Things still appear to be on schedule for an Annual Roguelike Release Party weekend release of the build.

Won’t be long now! Until then, enjoy this preview of the new abilities that are being added in that build. (Note: Yes, some of these aren’t melee. Improving melee a little is the main point of the build, but it isn’t the entire build. For example, some relics such as Faithful Heart and Hand of the Dead are getting expanded starting options, and some of these abilities are part of that.

Absolving Cut: 70 Power attack. Removes Guilt, Mute, Pariah, or Hex from you or a nearby ally.

Bloodthrist: Heals you for 25% of the damage you deal with Slash, Impact, or Pierce abilities (affected by Body resistance).

Brain Knocker: Provides a 50% chance for your Slash, Impact, and Pierce attacks to delay the next turn of the target.

Calming Cut: 70 Power attack. Removes Stun, Panic, Sleep, or Charm from you or a nearby ally.

Guarding Cry: Briefly improves defense by 25% for you and your allies (Area).

Heavy Guard: Responds to blocking and parrying attacks by adjacent enemies with a 40 Power attack that has a 35% chance to inflict Stun, causing the target to miss their next turn. Cannot miss.

Leap Attack: Must target a character. Leap to the target with an 85 Power attack. Inflicts Stun, causing the target to miss their next turn.

Malleable: Improves natural HP regeneration and healing received (including from the Regen status effect) by 25%. Does not affect abilities that drain or heal based on dealing damage.

Numbing: Provides a 20% chance for your Slash, Impact, and Pierce attacks to apply Paralysis, causing the target to frequently miss their turns.

Riposte: Responds to being missed, dodging, and parrying attacks by adjacent enemies with a 70 Power attack.

Silver Hand: Provides a 20% chance for your Slash, Impact, and Pierce attacks to apply Mute, which prevents the use of non-physical abilities.

So, as previously discussed, I’m attempting to nudge melee a bit more towards the center line viability wise.

The biggest problem it has had up to this point is it required more investment (in terms of stats: Strength, Vitality, and Agility all being more or less required, with Cunning often riding along too) than most magic/support builds, which were free to focus on as few as a single stat depending on what they had in mind.

At first, I considered addressing this by adjusting how Strength, Agility, and Cunning behave by giving them special bonuses that only applied to physical/melee… but, I instinctively dislike the idea of “unbalancing” something to fix a balance problem. Strength and Magic after all were balanced numerically: both give a 25% damage increase per point per level spent. The problem is that Magic covered a better set of abilities than Strength.

In trying to decide what to do instead, the release of relics was a big help. Once melees had access to more melee-oriented starting packages, things looked much better for them. Even with the stat “problem” still in effect, the new offerings for melee were allowing characters to make good use of those diverse statistic requirements.

That was what helped me settle on the approach I’m taking for the ARRP/Melee Improvement build: rather than try to change the stat problem, make it a non-problem by making sure melee abilities reward the high cost and take advantage of the diverse stat expectations. To that end, I reviewed the existing melee abilities and will be making some tweaks (such as Pounce and Bull Rush no longer using Breath cooldown, but instead using their own Charge cooldown; and “support slash” abilities like Reviving Cut and Guarding Cut being able to heal/buff the user), adding new abilities (such as Bloodthrist, a passive that adds a 25% drain to all physical attacks) , and tweaking the ability sets melee demons in the Tower have both to make them more effective opponents (for example, Ogres will now be getting Oppressor, which boosts defense versus lower HP enemies) and to make sure melee players are getting good access to strong abilities like magic does.

All that said, I expect and want the end result of these changes to be a nudge. I think melee was a fair bit behind before relics, and post relics is only a bit behind. These changes are intended to push it even with the other types of builds and options available.

I’ll post again tomorrow with a list of the new abilities being added, for those who are curious and want a sneak peek. :)

The A*R*RP, The Annual Roguelike Release Party! Basically, it’s a weekend where roguelike devs encourage each other to release updates to their projects.

Granted, Demon gets updated all the time, and I think the idea is more about pulling unknown/unreleased roguelikes out of the shadows, but known roguelikes are still totally welcome, so I’m planning to participate.

I didn’t know this was a thing until just here recently, which is a shame because I’d have liked to have plan on something extra-interesting for it. However, I think I’ve come up with a reasonable goal that will still be pretty exciting: an attempt to shift the balance a bit  towards melee characters/builds, who has Xavier and others have pointed out, tend to get a bit of a rough ride up until now because of how many stats are required (Strength, Vitality, Agility, and often Cunning too) This will also include a small number of new abilities being added to the game, many of which will be available on the Titan’s Fist relic.

I’ll post more details about what I’ve got in mind soon.

Fixes a nasty bug with Rallying Cry, and also improves the interface for using abilities that can only be aimed at yourself.