For awhile now, there’s been a bit of an imbalance between the Light and Dark elements. In most respects, they mirror each other, but then there were Dark’s MaxHP damaging/draining abilities. Light didn’t have any equivalent, and it’d been bothering me for awhile. But, I finally figured out (and overcome small implementations with) an idea I’m happy with, which is represented by an example I’ll show here. 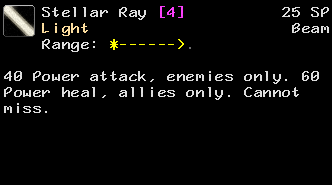 Stellar Ray and its various cousins will be part of the new ability content push build that is next up for release.

9 responses to “Let There Be Light”