The sprites are pretty much done, but there will be a slight delay on the next progress update as I transition from one job to another.

Don’t worry, the delay will be brief (probably just need a week or so to get everything sorted out properly.)

Switching back to my sprites for this preview, here’s some more of the new demons and other Tower dwellers coming up in the Tower:27-29 build!

Ijiraq: Inuit mythology speaks of these shapeshifters which are capable of existing in multiple planes of existence at once. Neither ability is fully perfect: they often appear to be only partially in phase, and when taking human form, their facial features are sideways relative to normal humans.

Meamei: One of a clan of women from Australia who once hoarded the gift of fire away in their magical staves, until they were tricked into releasing it by Wahn the Crow. In other tales, the Meamei eventually ascend to become the Pleiades star cluster.

Athena: A renowned Greek goddess governing war, wisdom, and crafting. Most mortals regard her favorably, but she in fact possesses quite a temper: her vindictive curses upon mortals are responsible for the existence of multiple other beings present in the Tower, including Arachne and Medusa.

Thor: A famous Viking god who is most well known for his association with storms, but also claims strength and fertility as his domains. It is believed he protects both Asgard, the realm of AEsir, and Midgard, the realm of mortals from threats such as Jotunn. So high in the esteem of mortals does he stand that a day of the week (Thursday) remains named for him even in the present era.

Shiva: A many-faceted and powerful Hindu god who stands equal to Brahma and Vishnu as one of the utmost divine entities. At times benevolent and serene, he can be overwhelmingly fierce when finally roused to anger. He is called “The Destroyer” for the role he plays in the ever progressing cycle of the cosmos.

Voloh: A wizard who dedicated his life to unraveling the deepest secrets of magic. As part of his studies, he discovered information about the Tower and immediately knew it would be the perfect laboratory for continuing his research. The very few Summoners who meet him near the Tower’s apex are just more opportunities to test his continually growing power and knowledge.

Here’s another preview of some of the new demons that inhabit floors 27 to 29 of the Tower, this time using Geminimax’s sprites.

Asura: One of a clan of divine beings, said to be the heirs of a great sage, that is inclined towards aggression, violence, and hostility, but not necessarily outright evil. They are restless in their desire to make war upon the Sura.

Grootslang: The Grootslangs were one of the first animals created by the gods, but their overwhelming strength and plentiful cunning proved too dangerous to be possessed by a single creature, so they were split into two different animals: elephants and serpents. However, it seems of them were overlooked and are rumored to live in South Africa, as well as being present in the Tower.

Kaliga-On: A volcano spirit of the Philippines that will watch over and protect humans of good conduct, but send diseases and plagues upon those whose actions it does not approve of.

Night-Gaunt: Servants of Nodens, a primal Lord of the Great Abyss. These faceless creatures are normally not as malevolent as their appearance may suggest, but those in the Tower are invariably and unusually aggressive towards Summoners.

Sura: One of a clan of divine beings, said to be the heirs of a great sage, that is inclined towards peace, benevolence, and tranquility, but not necessarily good. They are locked in a cycle of endless conflict with the Asura.

Feels like it’s time for a brief preview of some of the new demons you’ll be encountering on floors 27 to 29 of the Tower when the new build is released. For this preview, the sprites are using my own versions: a preview using Geminimax’s sprites will follow soonish.

Marmoo: According to Australian legend, a spirit that was driven to create insects by its jealousy of the vibrant life created by others. Due to the tiny size of insects, the problem grew unnoticed for sometime until all of creation was in danger of being devoured by them. Other creator gods responded to the threat by transmuting flowers into birds, which brought the insect horde under control.

Spriggan: A type of nature spirit that appears as tiny, frail old man with a child like face. But appearances are deceiving: they possess immense physical strength in spite of their size, lending credence to the belief they are the ghosts of giants. They tend to use this strength to ill purposes, creating all sorts of mischief and destruction among mortals.

Jorogumo: Japanese stories tell of the “entangling bride”, a woman with the legs of a spider sprouting from her back. Initially they eat insects as other spiders do, but should they survive and grow large enough, they gain shapeshifting powers and begin to prey on men instead, using their beauty to lure them close enough to entrap and devour.

Telvora: A Summoner chosen by the Faithful Heart relic. He was once a high priest of a major religion, but broke away from with a large number of followers to form a new sect that was eventually hunted down and destroyed by those still faithful to the original beliefs. He himself survived and, having nearly completed his journey up the Tower, believes he has found in his Relic and his new allies the means to see his beliefs spread over the world once he can escape.

Sati: A Hindu goddess who was reincarnated as the daughter of Daksha. She eventually came to marry Shiva, with whom her father Daksha had an ongoing dispute. Later when Daksha planned a grand fire ritual he invited a great many to attend, but not his daughter Sati or her consort Shiva. Angered, Sati insisted on going anyway; Shiva chose to remain behind. When Sati arrived, Daksha responded by loudly and incessantly insulting and denouncing her husband Shiva. Sati eventually became so angered at his behavior that she cast herself into the ritual fire, hoping to be reincarnated as the daughter of a more worthy father in her next life.

Daksha: A king of a divine bloodline. He was granted the boon of having a goddess, Sati, be born as one of his daughters. Unfortunately, this made him quite arrogant and he began to expect others, even among divinity. to bow before him. Most were willing, but Shiva would not bow to him. From that moment forth, Daksha regarded Shiva with hatred, hatred which came to include his daughter Sati as well, as she had married Shiva.

Just a small update to let you know I’m currently in the “research” phase of the Tower: 27-29 build, i.e.: digging through mythological references to find appropriate demons for the next floors of the Tower.

I should be ready to share specifics about some of the new demons you’ll be encountering soon with my next update. Cheers!

The new build is out! Links at the right have been updated, so grab away.

This build was pretty much entirely about UI upgrades, with a couple of bug fixes as well. Included are durations on enchantment icons, damage and healing values show in message logs, a new startup menu, and some other smaller improvements.

The next build will add floors 27-29 to the Tower: that means new demons and new abilities.

One last UI upgrade for the new build; enchantment icons now include their duration. (You get a * instead for indefinite durations, such as Heroism during certain capture attempts)

Quick note to mention I’ll be releasing the next build and its various UI improvements and other fixes in a bit under a week, sometime the weekend of 5/16-17 depending on how things go. Cheers!

Also in the next build: a new start up menu that allows you to access options and the Shared or Spoiled versions of the Codex Daemonium. (You still have to enter the game a specific character to view the Codex in Solo mode.) Hopefully this will help improve visibility of the option menu, and fulfill a player request to allow Codex access from outside the main game. 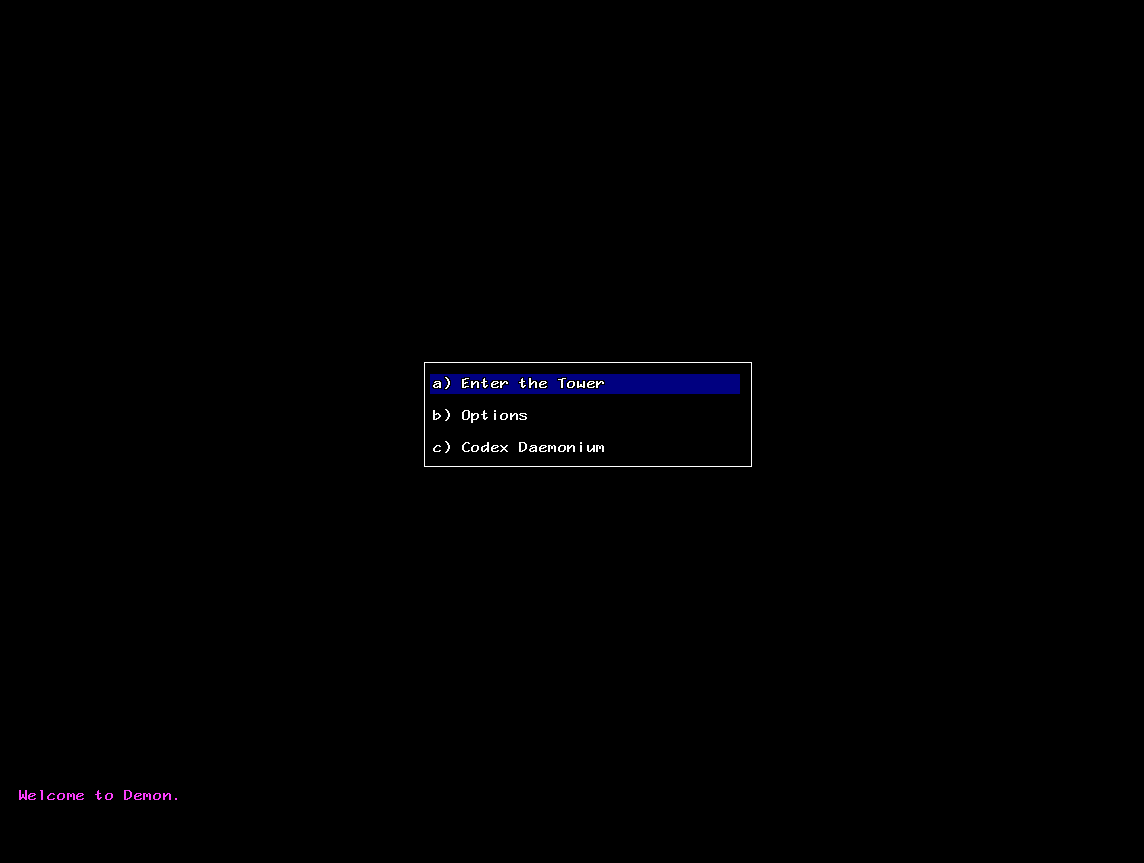 One of the little improvements coming in the next build. 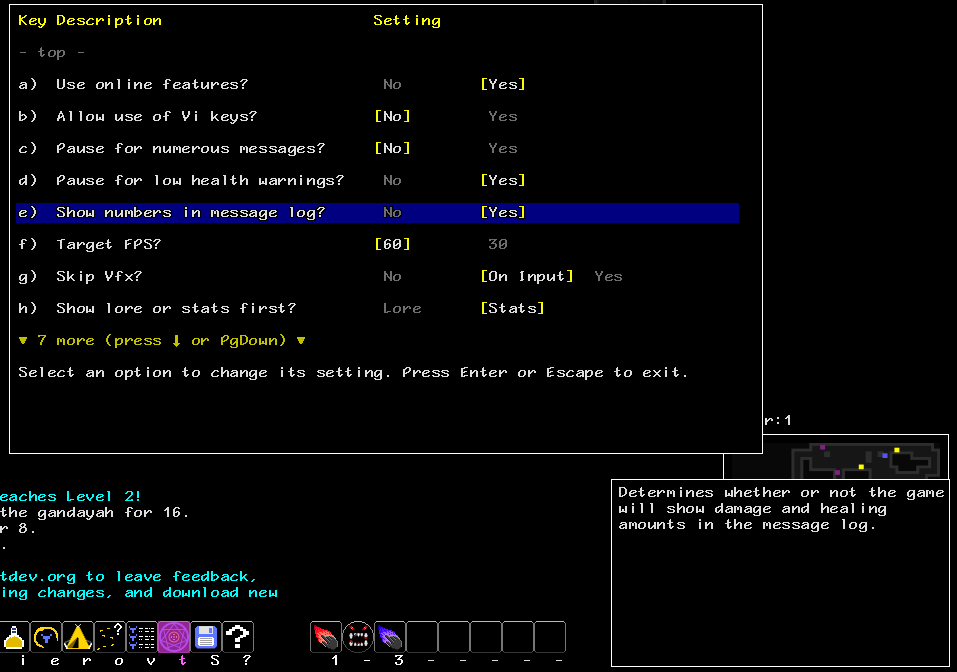